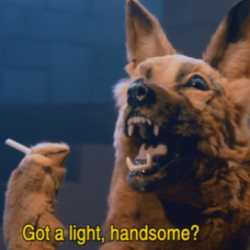 Sep
Gratuitous Simpsons References League Champion, Inaugural 2014 season.
Benevolent Champion, gentle lover, mysteriously dapper. These are a few of the superlatives whispered in the dark corners of the world about me. I promise to only add the most head-scratchingly inane comments and never, ever stimulate the conversation as long as the doors are open.
WITNESS ME: writingprocrastination (instragram)

Latest posts by Sep (see all)

Well well weeellllll… Looks like we’re (I’m) back folks. First off, a big welcome to all you newcomers in the Bar Car of the KSK Express Train to Up For Whatever, USA. This one looks to be going off the rails faster than an Amtrak outside of Philadelphia, but enough about the Eagles “organization.” HO! I’ll be here all night, don’t forget to tip your bartenders.

So, did you know this? Did you hear about this? (Fuck you and your chiny chin chin, Leno). Apparently it was 1995 Week over at this little site I frequent, from time to time, called A.V. Club. Now, nothing against ’95 in general, it was a wonderful year! Stuff happened! Music was released in Compact Digital form! I may have gotten laid (I didn’t)! There was no such thing as an Ed Sheeran! That last point should seriously be looked into. Have you seen that guy?

Ah, yes, nostalgia. That all encompassing word for the halcyon days of your bygone youth. Kinda goes hand-n-hand with reboots and remakes. Which brings me to my point: Nostalgia and all that is associated with it can fuck right off (that includes you, marketing people). You know what didn’t happen in ’95? I didn’t get to touch Jamie on 109th Way’s titty. I heard she was a slut, and I made a pass, and she didn’t let me get some. Whatever, I heard she got fat anyway.

Like that dude who said Michael Bay, “raped his childhood,” when he remade/rebooted Ninja Turtles. Really Guy? You place that much value on a group of Anthropomorphic Reptilia that practice karate and are lead by a stereotyping sewer rat? Christ! Tom Cruise’s specific brand of looney milquetoast was supposedly the last 19th Century Samurai and no one even blinked (no offense)!
Look, I’m not saying you should never be nostalgic. Just, do it somewhere else, away from me. And, if you wanna get mad over a turtle, then get pissed over this:
http://www.wallpaper4me.com/images/wallpapers/turtleentourage-765467.jpeg

this moron sees more tail in one week than you will your entire life – Doug Ellin, probably

Sep
Gratuitous Simpsons References League Champion, Inaugural 2014 season. Benevolent Champion, gentle lover, mysteriously dapper. These are a few of the superlatives whispered in the dark corners of the world about me. I promise to only add the most head-scratchingly inane comments and never, ever stimulate the conversation as long as the doors are open. WITNESS ME: writingprocrastination (instragram)
Subscribe
Please login to comment
18 Comments
Inline Feedbacks
View all comments

Also, that Doug Ellin “quote” was my favorite part of this. Guys like that guy can go die in a fire.

On topic, I just got back from Jurassic World. It’s a terrific “Don’t analyze it shut up there’s fucking DINOSAURS” movie. I still have a big, doofy grin on my face. Also, Burt Macklin, Dinosaur Wrangler.

If they want to rape my childhood they’ll have to deal with the 70’s. Good luck with that fuckers.

What about your ears?
http://youtu.be/xF77Y1JLScc

Jokes on them. That priest already raped mine.

I already said this on Twitter a few days ago, but Ed Sheeran looks like if Chuck Johnson had a baby.

Yes! I was thinking grown up Cabbage Patch Doll.

Did you see the nightmare fuel that is the “where are they now” Garbage Pail Kids photo shoot?

I saw the headline for that but I refuse to believe any of those kids survived adolescence.

What’s going to happen when they run out of original culture to reboot? Reboot reboots?

Eventually there will be a Spider-Man reboot that comes out before the iteration it’s rebooting, only we won’t ever know.