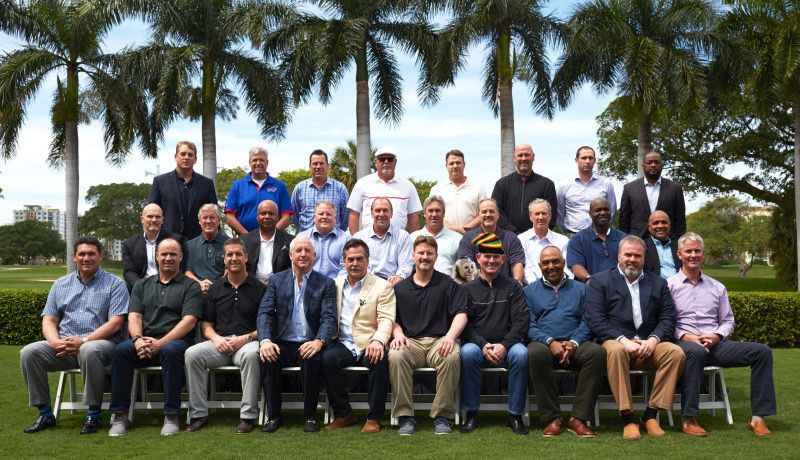 PETE CARROLL: And have the Rand Corporation track my viewing habits?  No thanks, man.

ANDY REID: [looks up from bucket of fried chicken]

PETE CARROLL: I do enjoy Mr. Robot, though.

JIM CALDWELL: As do I.

BILL BELICHICK: Grumble grumble FX is where it’s at.

CHUCK PAGANO: A bit unrealistic, though.

CHUCK PAGANO: No, no, I mean in its portrayal of the cocaine trade.  Trust me, I’ve, um, witnessed a few things.

REX RYAN: Hey, come on now.  My players might be a little out of control, but they’re basically good kids at heart.

MIKE MULARKEY: No, YOU’RE the worst!  At least my draft picks can survive longer than a week.

JOHN HARBAUGH: My brother and I watched Anger Management for a while, but found it devoid of practical tips.

CHIP KELLY: What’d you call me?

JAY GRUDEN: Oh, I wasn’t talking about you [glances at a nearby Dan Snyder].

MIKE MCCOY: It would be best if we were to assemble for the group photo now.

PETE CARROLL AND BILL BELICHICK: [in unison] NO CAMERAS!

The theme for this week’s Request Line is “spycraft”.  Whether that means spies, disguises, surveillance, or shadowy government organizations is up to you.  I’ll get us started with one of the classics.  Have fun!

Missed a perfect chance to double shot this with my other Bauhaus song.

“Someone” missed a 2fer:

“Someone” missed a 2fer:

How was this missed?

Because I didn’t have a chance to get here and post it myself.

Because I posted it on the first page.

Can’t help myself….
Bruce is not banging any baby dudes!!!!
https://www.youtube.com/watch?v=nrbSB8NLBjA

Who Can It Be Now?

Yes. Yes it does.

DOUBLE SHOT IN THE SAME VIDEO!!

This one should not have lasted this long.

/”that’s what she said” – Rex Grossman

The Doors – The Spy

Willoughby – I Know What You’re Up To

“The third planet is sure that they’re being watched…”

Another one by my old drum teacher’s band. Music starts around the 50 second mark.

No Knife – The Spy

I can’t find the actual version, so here’s a decent cover.

That is the hypnotic and terrifying thing I’ve seen since two girls one cup.