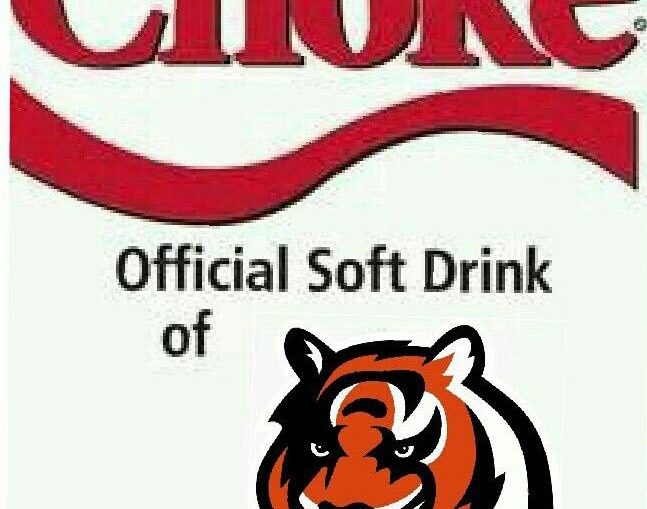 Sweet, sweet hatred – I found you at last.

For as long as I have been torturing myself (and you) with these articles, I had yet to find concrete examples of undiluted anger. Sure, there were a few armchair patriots who got their say in during the early days of the anthem protests, but that wasn’t the kind I was looking for. No, I wanted the rage that only surfaces when the team you support finds another aggravating way to lose, and to a hated division rival, in an embarrassing fashion for the whole world to see.

Well, I got that shit in spades following the Monday Night game between the Steelers & Bengals. 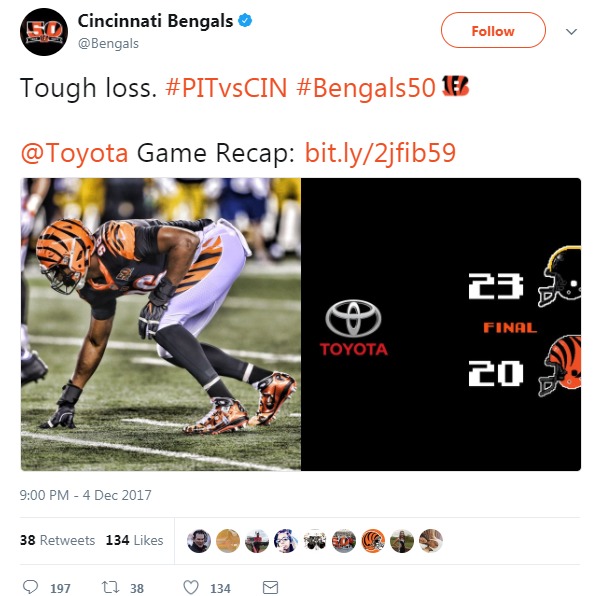 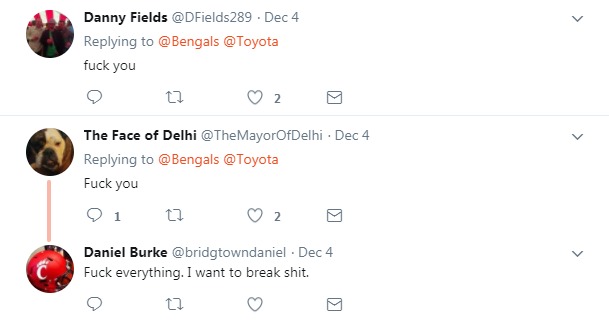 Yet, despite the dirty play bringing out haters on all sides – on Bengals Twitter, 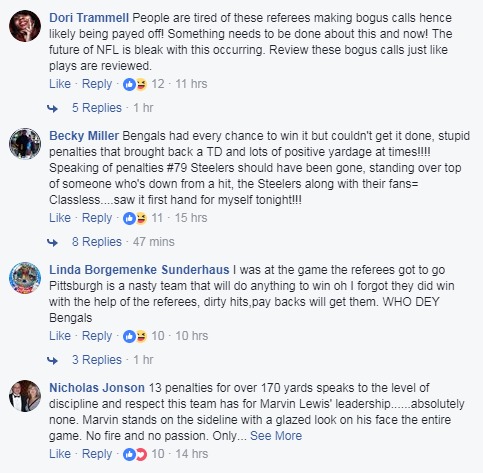 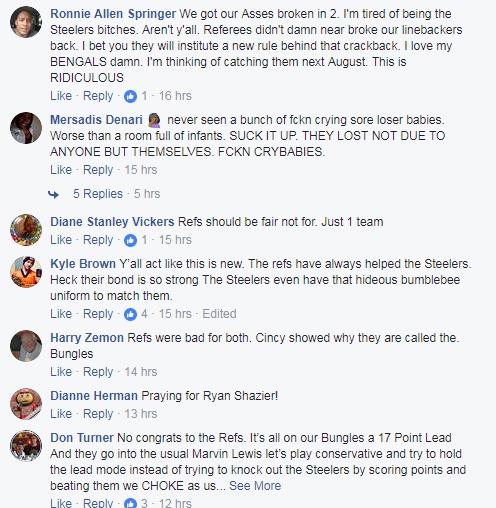 there was one specific target for the ire: 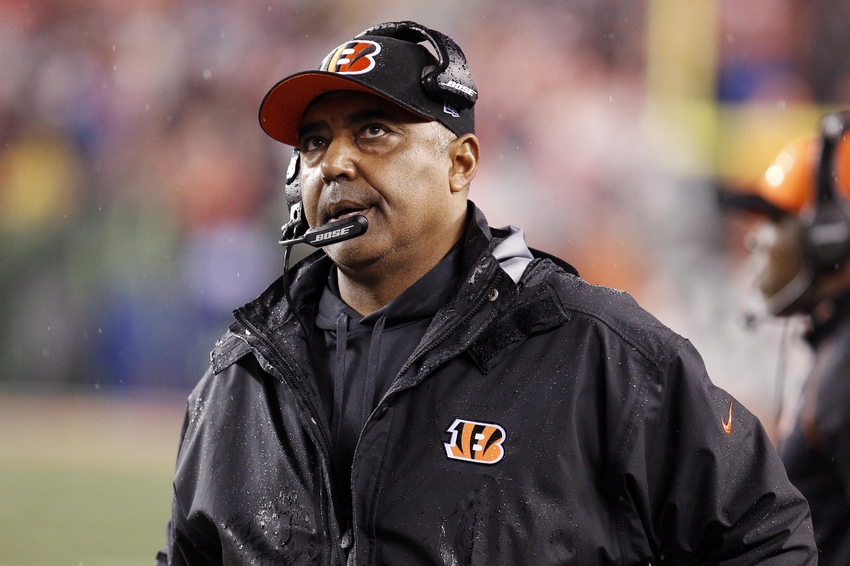 Now, I realize he’s a lightning rod for most Bengals fans, since he’s been around 14 years and acquired 0 playoff wins, but the Steelers game seems to have galvanized frustrated fans, as it spawned three separate hashtags 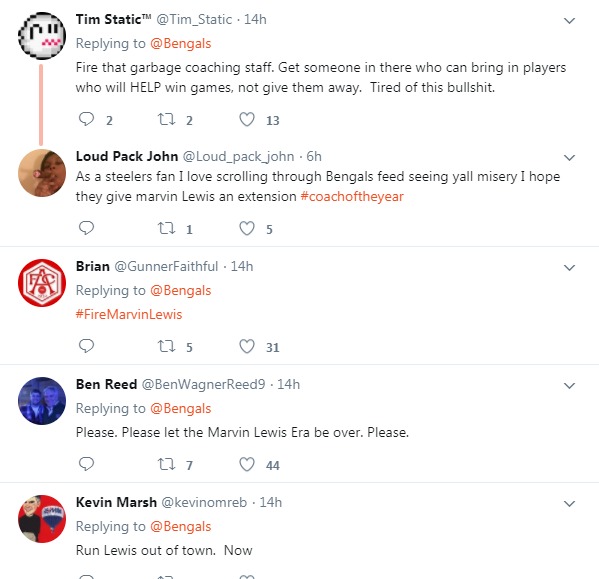 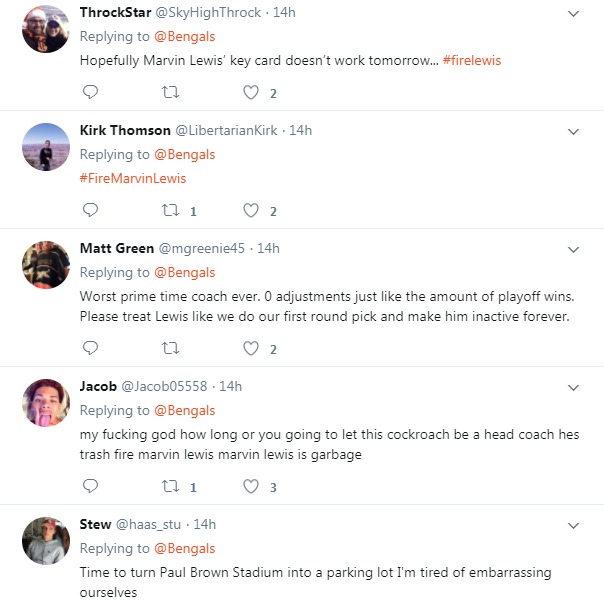 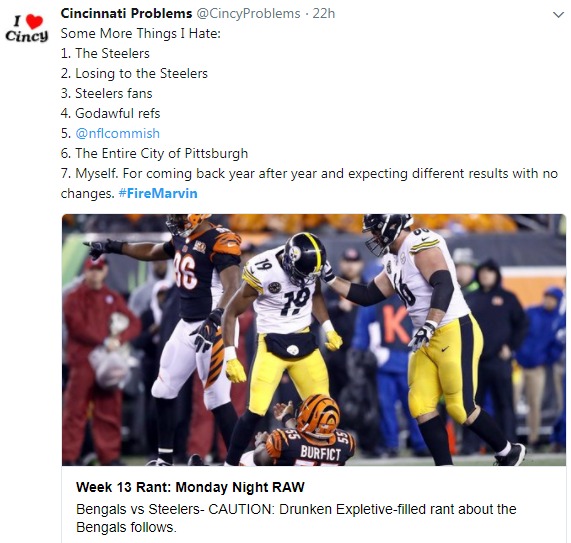 (this person wants to be Fozz; is not Fozz.)

However, it’s a lot of noise that masks one irrevocable fact,

So, all that’s left to look at is the confused,

and the “enemy of my enemy” crowd,

before getting ready for the next game, Sunday afternoon at home against the Bears.

The fans have fallen into one of three categories –

Although, there might be a few more folks shopping at the store of SBNation’s “Cincy Jungle“ page this week, 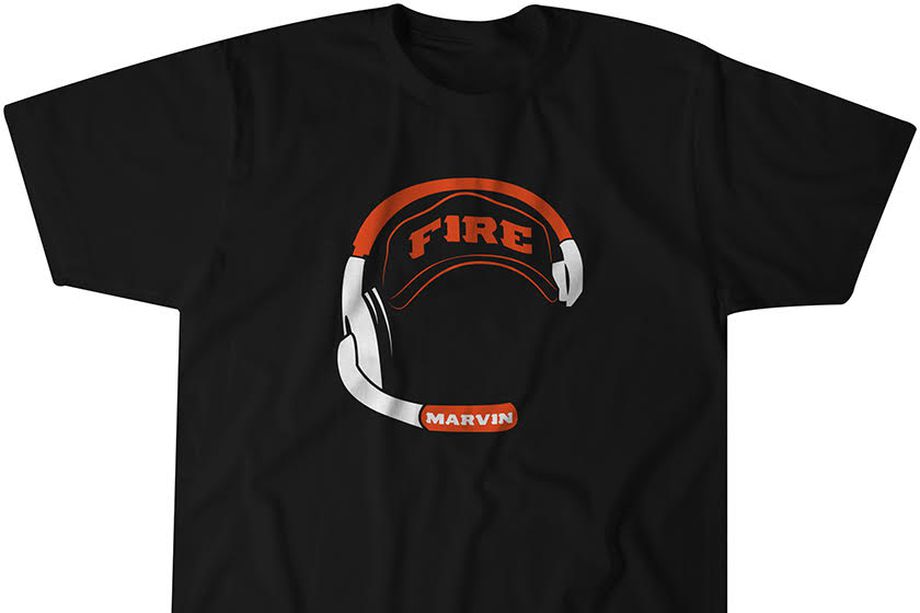 মহিলা ভদ্র, your 2017 5-7 Cincinnati Bengals. Based on what the Cincy Jungle interpreted ESPN’s in-game comments to mean, these people might finally get their wish.

Beerguyrob
A Canadian man-child of indeterminate age, he stays young by selling alcohol at sporting events and yelling at the patrons he serves. Their rage nourishes his soul, and their tips pay for his numerous trips to various sporting events.
Subscribe
Please login to comment
22 Comments
Inline Feedbacks
View all comments

This has been building since the 2012 playoff loss. I think Brown will let Lewis go. Brown’s a shitty GM but he’s a great businessman and you don’t make money when the paying customers go from angry to apathetic to FC Cincinnati fans. That’s the one thing I didn’t find. Either Twitter has improved their filters or those type of folks don’t inhabit official team feeds anymore.

Maybe they quit because of #kneeling.

Maybe, but Twitter is definitely still a quagmire of racist taeks

Speaking of quality hate, it’s nice to see that sometimes Big Daddy Balls has still got it:

…any sane Philly fan should watch the coming playoffs peeking through their hands. That is that kind of mopey fatalism I am accustomed to, and it’s certainly more appealing than a bunch of bald assholes crowing because they’ve been tricked into believing that you can’t lose a game if you haven’t played it yet.

he’s still a good read ( to me) after all these years.

Which one is Redshirt?

Can’t they all be Redshirt?

We are all Redshirt.

I’m don’t know how to tweet. It’s done great things for my psyche.

I love wandering down the hot taek rabbit hole after losses of any professional team.

So, is this মহিলা ভদ্র, supposed to be ladies and gentleman, or “ladyboy”.

It’s “ladies and gentlemen “ in Bengali.

ah believe that hatred is our future…

This is straight quality. Good for the Bengals.

That is some solid hate right there.