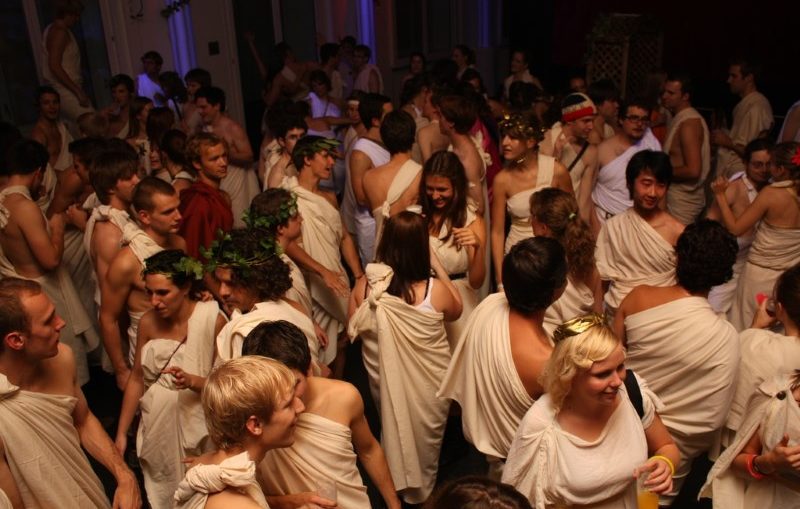 The party is underway, and it is absolute pandemonium.  As promised, the cheerleaders from Ben-Gal House are in attendance.  Hundreds of students clad in togas are milling about drinking from red cups, chatting and flirting with each other, though it’s pretty much impossible to make out any dialogue over the sound of the band that’s playing on a stage at the back of the main bar.  ANTONIO BROWN moves through the party, trying to reunite with his fellow pledges, from whom he’s been separated for over an hour. 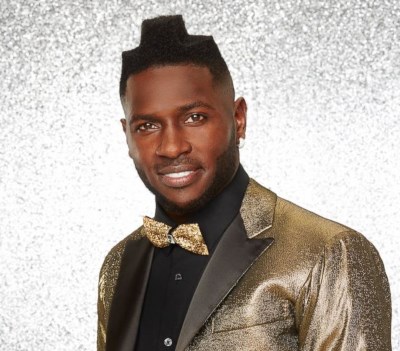 ANTONIO BROWN: Man, I wish they woulda told me this was a toga party. I feel ridiculous wearing this suit.

He steps around a group of students who are watching someone do a keg stand.

A lacy bra flies through the air and lands on his head.

ANTONIO: [swiping it away] Eli? Where you at, Eli?

A beautiful redhead steps into his path. 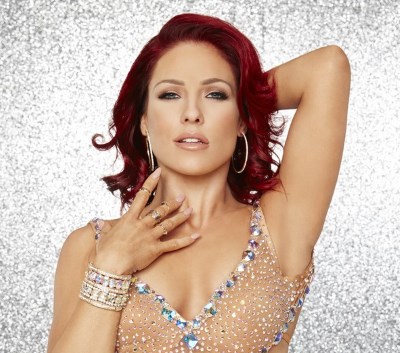 ANTONIO: Not now, sweetie.  We gotta haul some empty kegs out.  You ain’t see a white dude, looks about fifteen years old, probably talking about Decepticons or some shit?

ANTONIO: Damn.  [looks out over the crowd] Doug? DOUG! 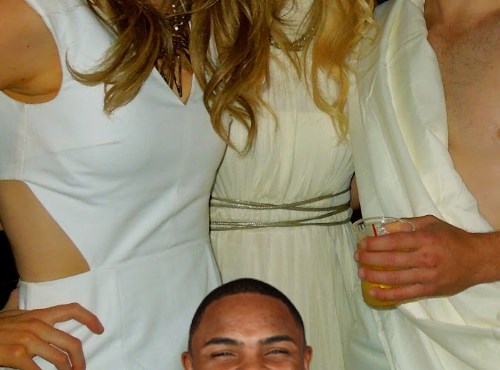 DOUG MARTIN: [is standing right in front of him] I’m right here!

ANTONIO: Man, we got like twenty empties to haul out.  Where the rest of them boys at?

DOUG: Last I saw Cam he was hosing some idiot down with a fire extinguisher.  Dumbass was trying to do that fireball trick from Revenge of the Nerds.

ANTONIO: Well, let’s find him.  We got work to do.

The two of them start walking along the periphery of the room.  As they pass a group of people lounging around on a couch, DOUG MARTIN sees a familiar face. 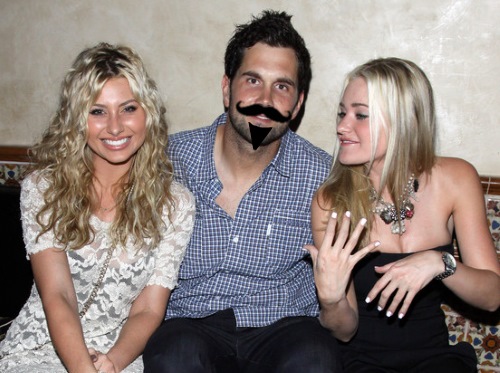 DOUG: Hey, wait a minute, I know you!  You’re Matt Leinart.  You play football in the NFL.  Or at least…you used to.

MATT LEINART: I’m sorry, son, you must have me confused with someone else.  My name is, uh…Nat.  Nat…[glances at his Corona] Lime.  [notices a particularly peppery-looking Ben-Gal walking by] Tart.  Lime…tart.  Nat Limetart, that’s me!

DOUG: You are Matt.  I’ve seen you play.  I thought you were the greatest USC quarterback to ever play in the NFL, but my dad says you were a bust.

ANTONIO: Actually, you were both right.

DOUG: He says you didn’t work hard enough learning the playbook.  And that you didn’t really try, except when the cheerleaders were watching.

LEINART: [looks around to make sure no one else is watching, then grabs DOUG MARTIN by his shirt lapels] Didn’t really try? Listen, kid, I’m out here chasing college tail every night.  You think it’s easy having retired with worse numbers than Jamarcus fucking Russell?  You think the jersey chasers are gonna be interested in some guy who talks on TV? My name is Nat Limetart.  I’m a student at the Maturity School, and I’m the starting quarterback for the football team.  Don’t blow this for me.

ANTONIO: [steps in] All right, man, whatever. Have you seen Eli Manning or Cam Newton?

LEINART: I heard Bortles yelling at Cam to clean up some puke in the bathroom.  You might check there.

ANTONIO: Thanks.  You’re all right…um, Nat.

ANTONIO BROWN and DOUG MARTIN head over to the bathrooms, which look to have been relabeled in honor the evening’s guests.  A random girl is about to enter the ladies’ room, when suddenly ANTONIO BROWN grabs her arm. 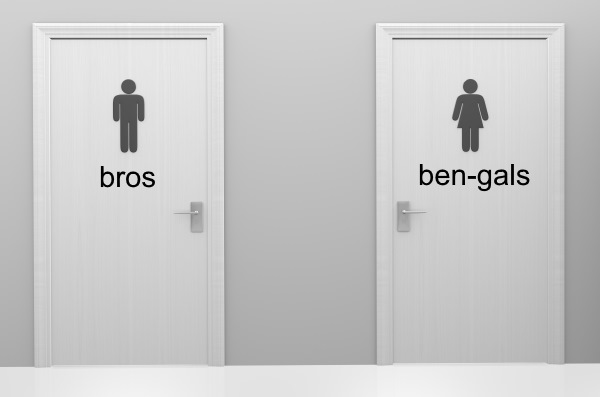 ANTONIO: Hang on a second…my spidey sense is tingling…something doesn’t feel right.  [pounds on bathroom door, then simulates a woman’s voice]  Is anyone in there?

BATHROOM OCCUPANT: [also in a badly simulated female voice] COME ON IN WE CAN SHARE HARF HARF HARF.

ANTONIO: Yeah…I don’t think you wanna go in there.  There’s some bushes out in front of the house, probably safer.

CAM NEWTON: [putting a hand on DOUG MARTIN’s shoulder from behind] Hey guys!

ANTONIO: There you are! Where have you been?

CAM: I threw that bra at you!

ANTONIO: Oh, shit.  Sorry, I’m not used to catching stuff from running quarterbacks.  Not as accurate as those pocket passers.

CAM: It hit you right in the head! 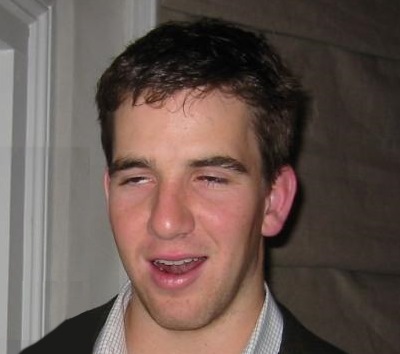 ANTONIO: Goddamnit, Eli, what the hell have you gotten into?

ANTONIO: Ah hell, he’s a mess.  [turns to the others] All right, one of you guys keep an eye on him while…hey, isn’t that…

ELI: [has wandered off]

ANTONIO: Where the hell did that motherfucker go?

CAM: [points to the stage] Look! 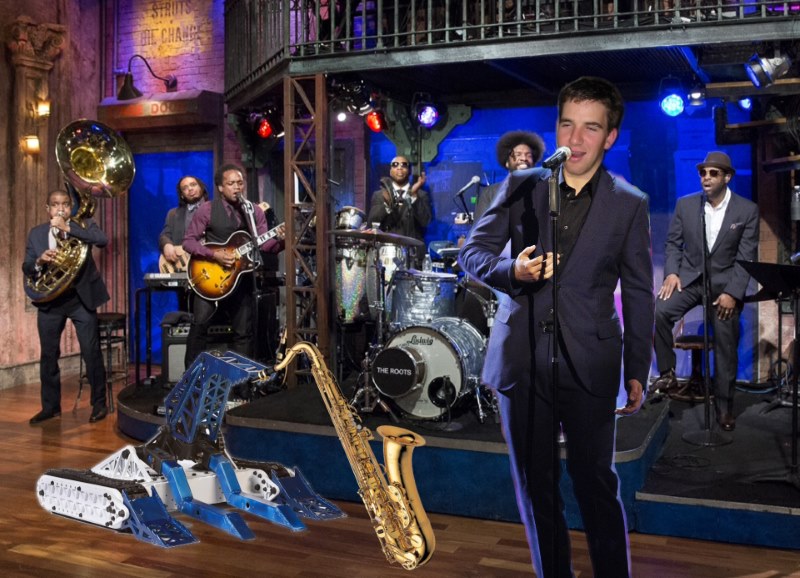 ♫ I’m so glad that they fired you for benching me,
Cause I’m the greatest quarterback in N-Y-C,
My spirals are the tightest when Odell runs the seam,
And mom says I’m the handsomest guy on the team,

♫ Some strawberry fruit roll-ups are waitin’ for me,
They got plenty of fiber and-a-Vitamin C,
I can’t wait to get home so I can play G.I. Joe,
You guys had better stand back cause I’m about to blow…

ELI bends over and starts hurling all over the stage

To be continued…THE MORNING AFTER! Yeah. Wonder why Matt Leinart was a bust…. 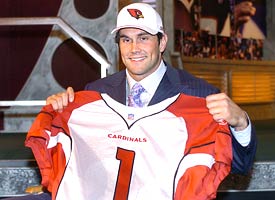 Why can I never not laugh at Doug Martin’s forehead?
Also, you might have a future in songwriting. Granted it’s a “Weird Al” future, but still.

Beastmode already does that with Horatio.

Nice to see Band Leader Bite Force is still playing gigs, with Chomp Chat on hiatus. Although it’s chicken scratch. At best.
/#WeWantSeason3
//They’ve had three seasons of the reboot of Robot Wars in that time!