Before I go onto the seething that emerged this weekend, allow me to reflect back on what occured while I was enjoying Christmas break 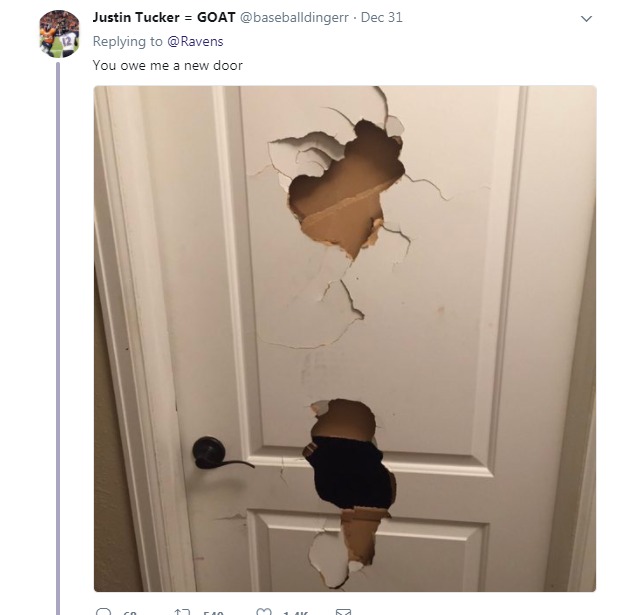 Wildcard weekend, brought to you by my friends at 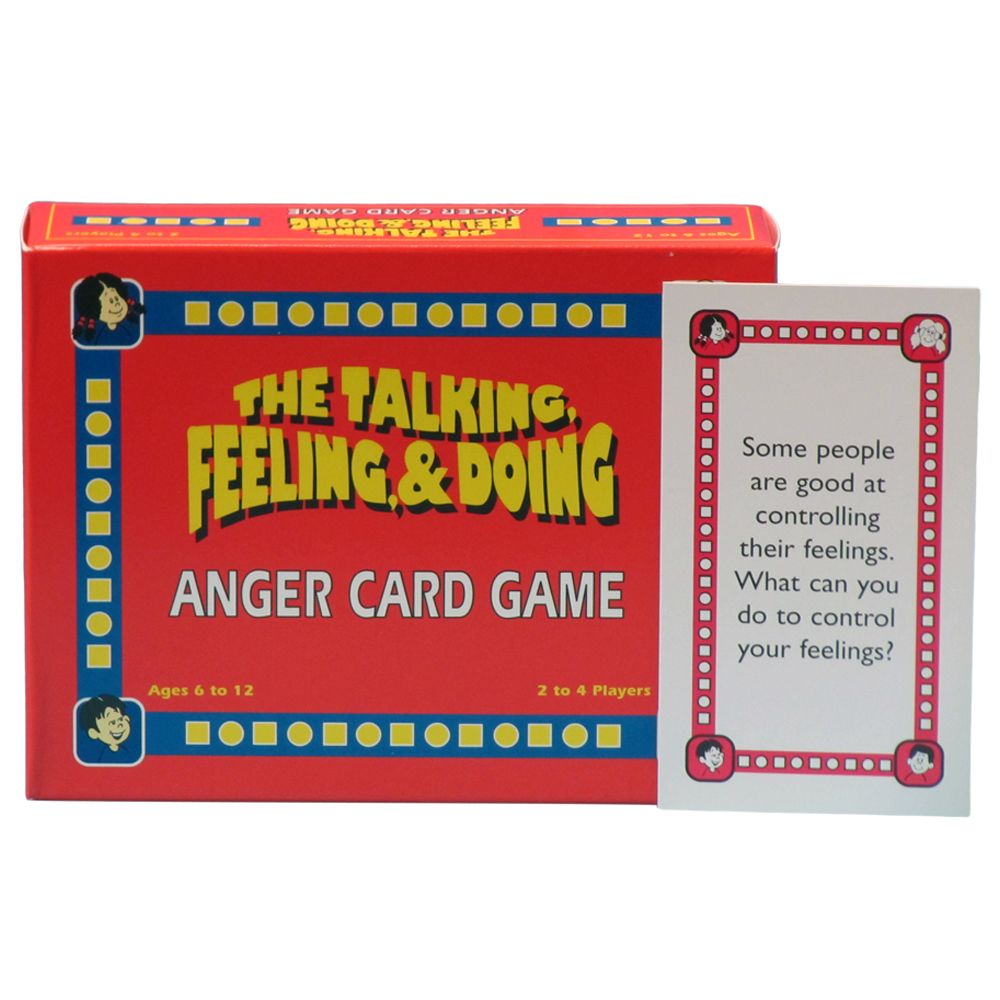 The Wildcard weekend did not disappoint. It started with Andy Reid remembering in the second half that he was Andy Reid. The only thing missing from this debacle was a wasted challenge and some timeout inefficiency.

Even though they’ve been here before, the KC fans came through in the clutch. I saw these ones a lot: 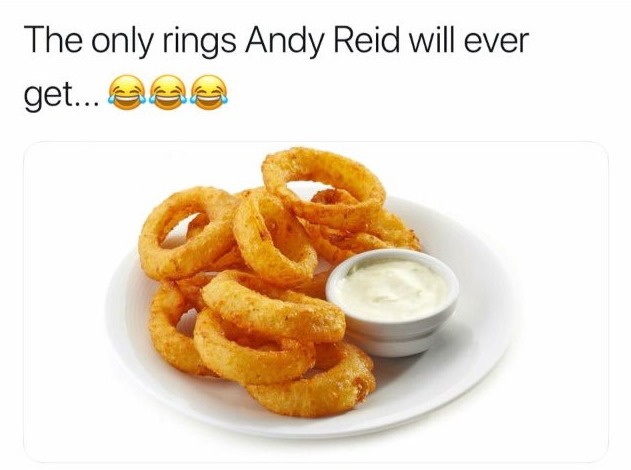 and reminders of past playoff choke-jobs, utilizing other team’s failures.

And the fans had opinions. 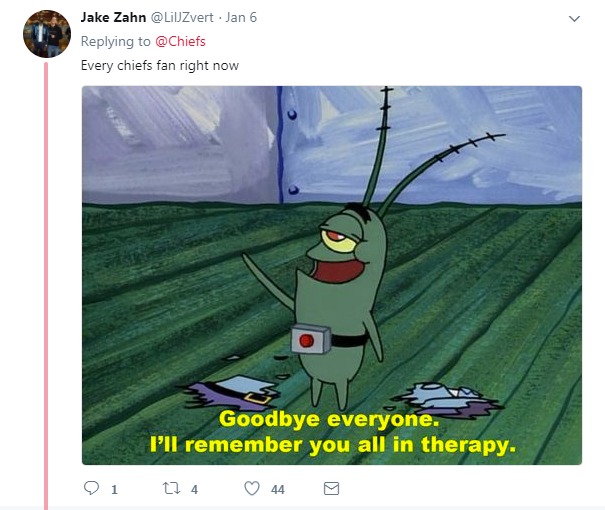 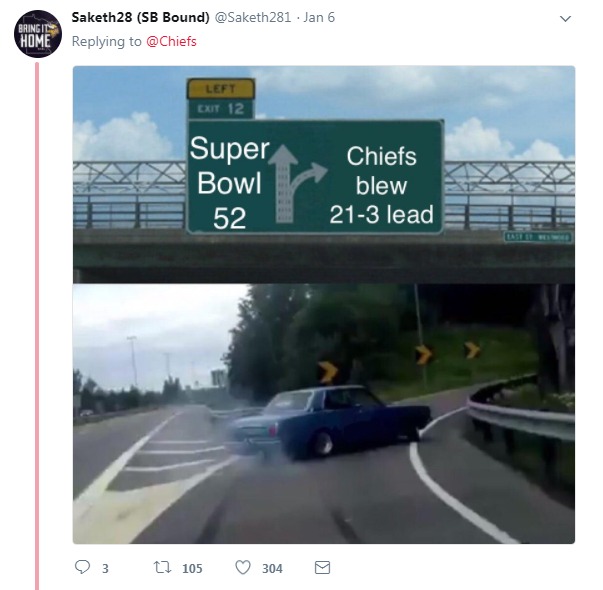 But on the bright side, I may have found Otto: 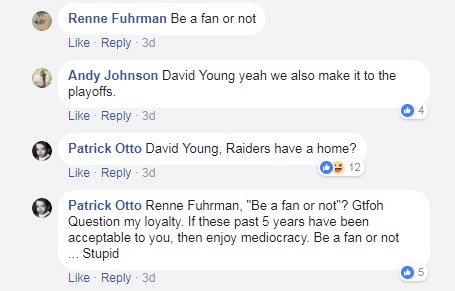 That was just the hors d’oeuvre of sadness. Now, I wanted Rams’ fan tears.

Just imagine you’d been gifted/grifted a team that suddenly became good due to the random decision to fire a career .512 coach with a 173–165–1 regular season record. 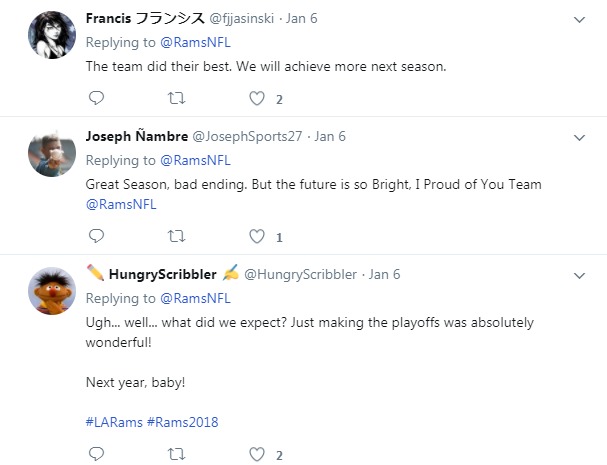 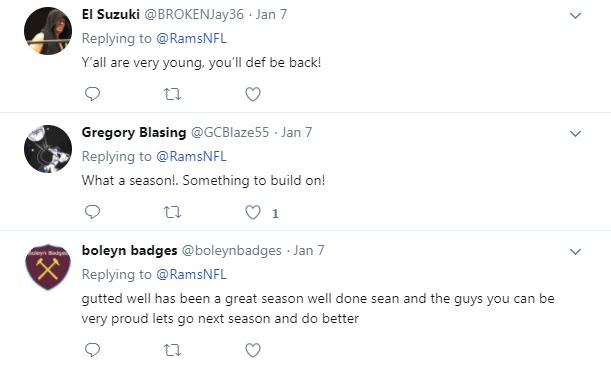 To be fair, most of the hate I found seemed to come from people outside the area code, mad at the Rams for punching above weight & gloating over fans who only bandwagon’d once the playoffs started. 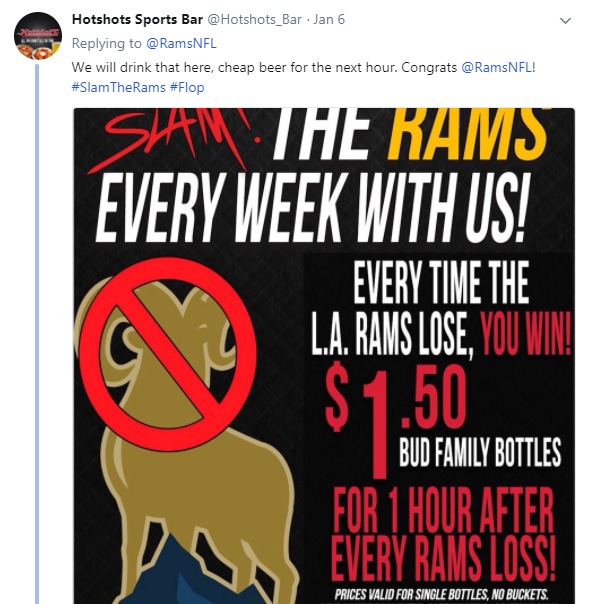 No fear of that with Bills mafia.

Although their joy is home grown from an early age,

so too is their anger. 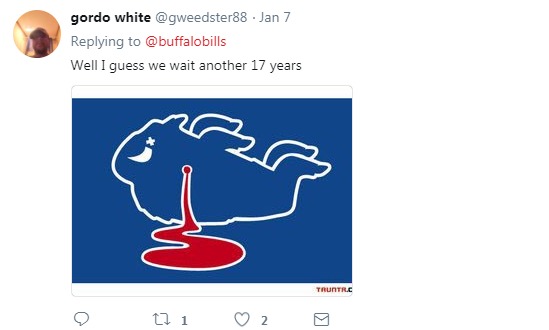 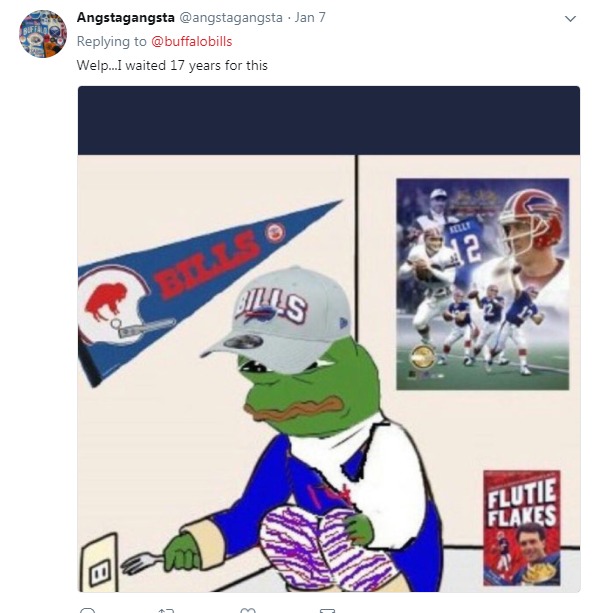 But it’s not official until that one stupid thing is said that makes the comment section a place to avoid.

Which brings us to Super Bowl 50 runner-up Carolina.

It didn’t help that they lost to the Saints three times this year, a point which wasn’t lost on local NOLA media 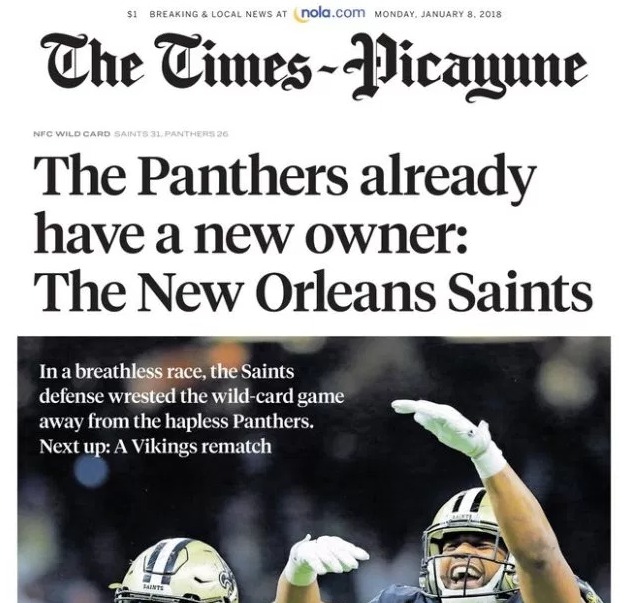 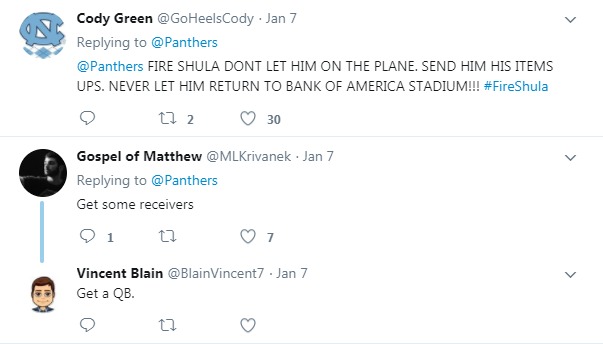 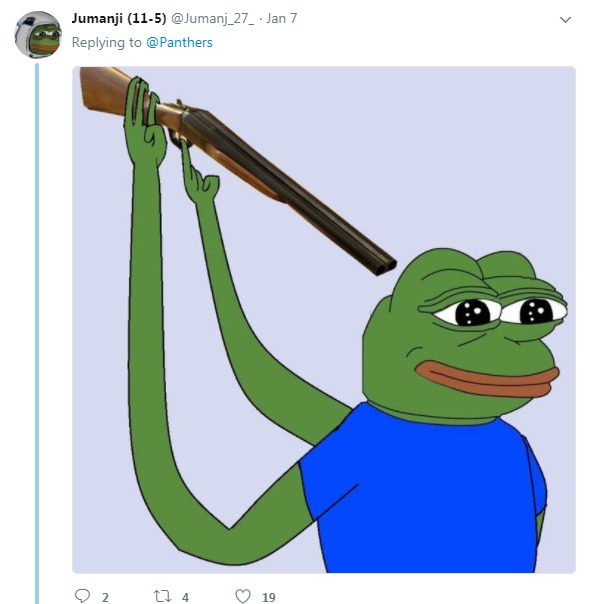 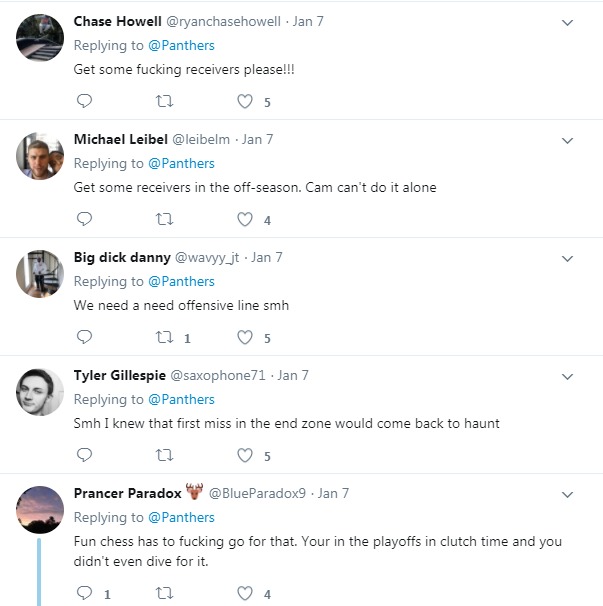 And yet, there’s still that one guy who’s so mad he’s lost both the ability to speak English and his common sense.

However, as if to show the football gods are merciful & not just out to solely fuck over Brocky, the Panthers fans got some salve for their open wounds later in the week. 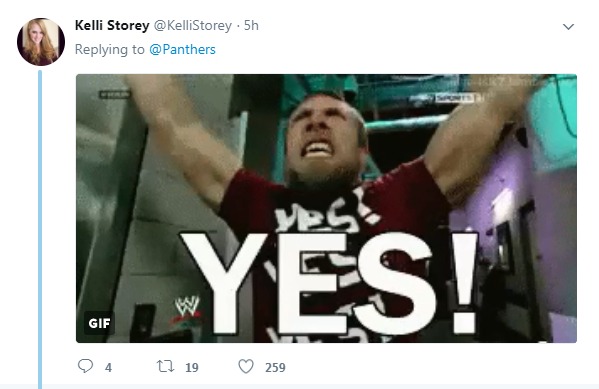 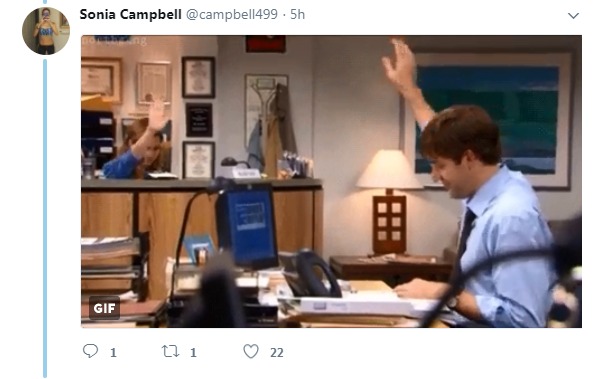 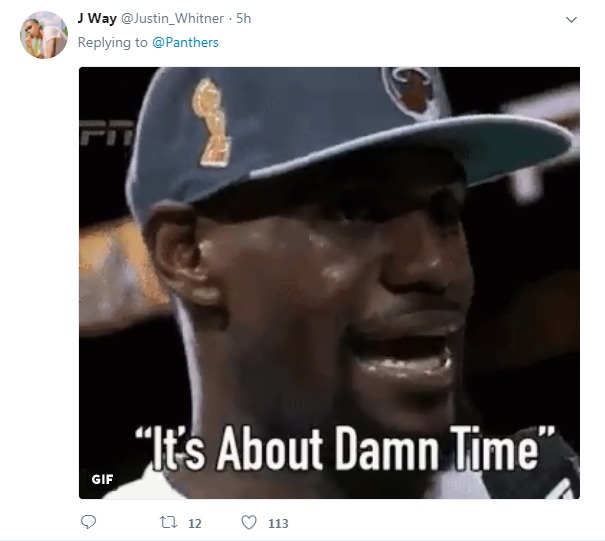 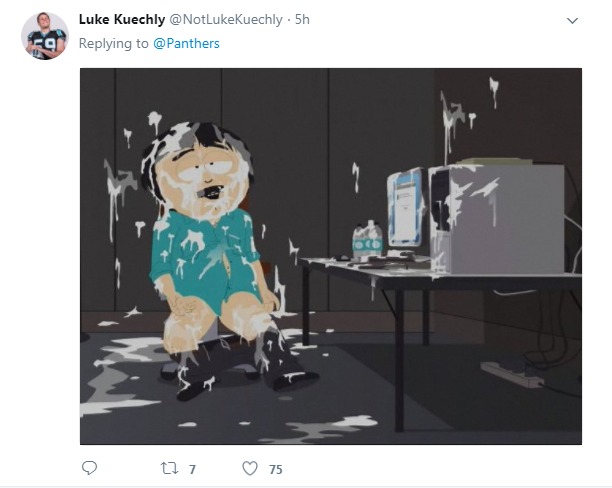 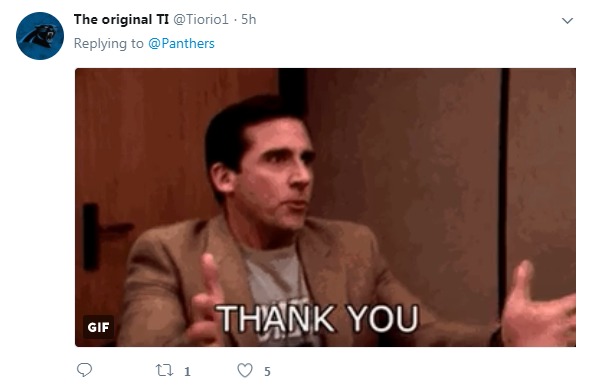 Until next season, all that awaits these fans’ rage is the Draft.

Thank us by actually winning something worth a shit sometime

Beerguyrob
A Canadian man-child of indeterminate age, he stays young by selling alcohol at sporting events and yelling at the patrons he serves. Their rage nourishes his soul, and their tips pay for his numerous trips to various sporting events.
Subscribe
Please login to comment
16 Comments
Inline Feedbacks
View all comments

Football fans; the whiniest, blaming through ignorance, entitled, petty,stupid angry assholes on the face of the earth, or close anyway. I like football.

I love fan angst, it gets me through bad days!

Do people in St. Louis really call it “the Lou?”

Enos Kroenke calls it “the loo”

All I want for MLK day is a Patriots version of this.

Would you have you have a fantasy…nay, a dream about it?

“So when’s the parade?”
-Browns Fans

That’s why other parts of the country hate SoCal sports fans; we’re not opening up veins after a loss, probably because it’s still pretty nice outside (Oprah’s backyard notwithstanding). Whereas if you’re in Kansas City, you’re in one of two shitty states with no hope and nothing to do until baseball season.

Also, nice job on this, you filthy Canuck snowback.

A great person once said that hate is not the opposite of love, it’s indifference.

Aww. I’m not that great.

That wasn’t Otto Man. There was not one sarcastic “Bazinga!” in his Tweets.

Great stuff, Beerguyrob! It makes me happy that the Seahawks were spared the humiliation of making the post-season, and then being decimated a week later. Instead we got firings! Glorious, glorious firings!

I almost shit myself laughing at this…

It needs a typo or some indication that it’s actually a cheap-ass knockoff.