Check out the smashed-into-the-windshield-several-times visage of Blake Jarwin. The toothfull grin that indicates that the keys shaken by the photographer please him. The too-small, beady eyes that have no doubt silently observed more than one grandmother undressing at bedtime. The throat devoid of an Adam’s Apple. The sloughing forehead that indicates him thinking, “I hate that Mr. Purrsident Trump! He ain’t bombed a single Guata-mawcallit Caravan yet, like’n he promised!”. Why do I call attention to him? He’s got himself the ‘Questionable’ status after not practicing all week. He showed what a weapon he could be after scoring three TD’s vs. the Giants and the Evangelicals are a bit worried because you know how much they love their ‘Revelations’. [Snickers to self-also, Milky Way’s to self]

Wr Cole Beasley is in the same boat injury-wise but as everyone’s cliche-dar goes off, yeah, he’s going to ‘gut it out’ like the hero puppy he is. “Gut it out” also just happens to be the title of my evisceration-centric autobiography.

Worrying Trend: In their last four games DAK!’s QBR rating has been 4th best in the league. Goff? Before the bye week he was ranked 4th-in the last 4 tilts he’s ranked 25th. Probably has something to do with Kupp’s ACL snapping and Josh Reynolds not doing nearly enough to fill the void despite single coverage.

Just Plain Silliness: The Cowboys D is being called The Hot Boyz? Way to embrace the homo-erotic undercurrent running thru your sport, fellas.

Rams Other Wideouts: They go by the name of Woods and Cooks. That’s also the name of the YouTube channel I head to when I want to watch animal-skinning vids.

Gentlemen, place your bets. You too, commentariat.

cowboys are giving up

how can something so thick, move so fast?

Ok Spur, I’ve asked you not to talk about my penis several times now.

I’m oddly curious about the circumstances concerning the other times.

What happens in Vegas….

Cowboys getting their ankles broken by present weight Bo Jackson

Changing up my drinks in honor of that 4th down call.

No way that can go wrong.

I killed off the last of my SN Celebrations today.

Zeke didn’t get his pre-game snack of lead paint chips?

I think that might have been a RAMMMMMMIT!!!!
Was that a RAMMMMMMMMIT???????

Well, compared to other things he’s “allegedly” hit, that’s not the worst thing.

Was the gap male?

That’s so much better.

Went to the well once too often. Ha ha.

Seven Nation Army? Now all the stadiums will start playing that!

Sure. Run it up the middle at Donald and Suh. What could go wrong?

Mebbe it’s the boots, but that Geico “Best Of” chick is oddly hot.

Am second wind Drunk. The Best kind of Drunk

no one blocked him, AM sure they could, if they tried.

Good point, but he still a monster. Love the way he plays.

Smith lunged at him. Does that count?

I love that little bastard.

come on. Do this!

dumb fucking RRRRRRRRRRRAM IT!! blowing it

I think Gordon Ramsay yelling loudly at someone who’s burnt out to get the fuck back to work is a great way to lower their stress.

I’ll say it now. I’ll trade a Cowboys loss tonight for a Chargers win tomorrow.
/I live in new England
//the radio will be fucking glorious

oh shit Cowboys. Please make the Rams pay for this.

Fun Fact: Johnny Hekker was a guest judge on “Nailed It”.

Oh, sorry. That was called “If I Nailed It”

He wrote a book?

That was a big-ass coffin!

Why was that not a reply to Rikki?

I wish, I blame my phone.

Sort of a thing?

-my last girlfriend on a Wednesday

Fake it all you want, Sweetie. I’m not.

Pass interference on the offense on a ball that was 5 yards out of bounds?

Sure, what the hell.

I thought the P*ts had the bye

Awuzie wanted nothing to do with that tackle.

And he had nothing to do with it!

If Dallas miraculously pulls this one out only to lose the the Eagles later…well, let’s just say the result of my behavior will probably put me on the no-fly list for life.

your lips to god’s ears

Romonobyl: IS THERE A LAWYER IN THE HOUSE? 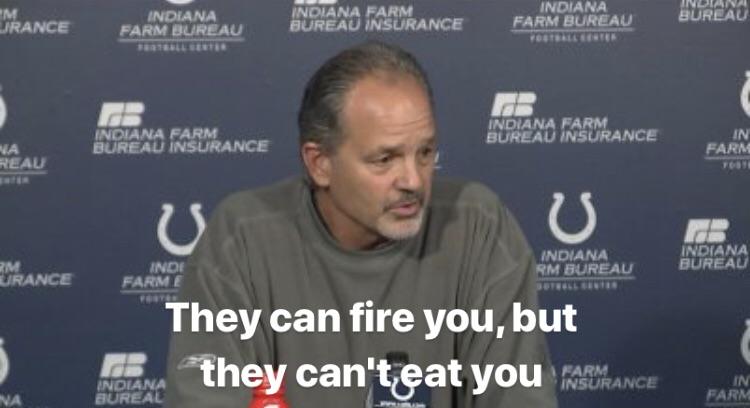 Buddy, you worked for Jim irsay. Let’s not leap to conclusions here.

I am a genius.

The video probably didn’t need to have such large dimensions, but fuck it. Here’s the soundless gif for God knows what use.

Dunno when that’s from (today?) but holy shit that’s funny.

I guess it was from today. I got it off Ape’s timeline.

It is. You’ll never guess which team Denico used to play for before he joined the Cowboys.

This would definitely get stolen by NFL Memes if anyone but you degenerates were to ever see it.

Hey now. They did the lord’s work by archiving all of the best KSK images. The giveaway is the nfl memes watermark on the bottom of the image.

If I got paid to make gifs like I do all the time anyway (and which I genuinely enjoy making), I wouldn’t need to do this lawyer shit.

I’m in a fantasy playoff thing where you pick one position from each team. 114 teams. Not a single one picked Dak at QB.

it’s on now. Pressure is all on Rams and the wonder boy coach.

Why’d they reset the play clock? Because they had to re-spot?

teams should do that every time, almost like getting a free half-timeout

It’s amazing what Jerry can accomplish with a phone call, a couple of 100’s, a gram of coke and an “escort” named ‘Titania’ who’s just trying to work her way through college.

Oh yeah, she’s worth a twenty.

Pete not being mauled by a bear in the finale of ‘Mad Men’ is one of the great disappointments in my life.

He not only doesn’t get mauled, but he gets Alison Brie back! What the fuck!?!

That tailgate looks awesome. But that ad is terrible.

Once again, I must acknowledge the brilliance of the actor playing the tech bro in the Turbo Tax commercial.

Why – IS THAT YOU ARE YOU AN AKTOR NOW?

If I wanted to be an actor I’d learn to speak Korean and then go work there. The American guys are always wonderfully evil.

(Johnny Carson voice) I did not know that.

Oh, it’s great. Anytime an American shows up you know they are going to be incorrigably corrupt.

I can’t imagine why South Koreans would think that. It makes you wonder what roles American actors would have in North Korean movies.

Not a smart call, he pulled it in.

Yeah, the only way I see this call changing is that it becomes a touchdown.

What did I tell you?