No doubt all are as geeked as I am for the big Hippo/yeah right Derby (9:15, NBCSN), followed by Spurs hosting United (11:30, NBCSN).  But let’s acknowledge the obvious, as NFL Divisional play takes the spotlight.

Kansas City came out for the snow day fun, and they weren’t fucking around.  31-13 is your final, but if anything that undersells the raw dominance displayed by Mahones-y, Damien Williams, and especially the Chefs’ front seven.  Indy got only a punt block TD in the first half (off a blatant missed OL assignment), and a late, nigh-garbage time TD (followed by missed extra point).  KC also lost a fumble inside its own 20 – another freak play – but took it back from HODOR! two plays later.  That 3-score margin was in place a solid majority of the game, and nobody can really fault Andy Reid’s gameplan one iota.  They will host the Clippers du Merde/P*ts winner next Sunday at 6:40.

Later in the evening, you had a grind-it-out clash in the LA Coliseum, a script one might expect to go the Non-Gendered Cowpersons’ favour.  You would be wrong.  Then, you would expect Gurley Man to have been a force of nature.  He played, and played ok…but wrong again.  ‘Twas Donks WOO!! alumnus CJ “Bash” Anderson who carried RRRRRRRRRRRRRRRRRAM IT!! on his shoulders (and massive derriere) into the next round.  Yes, the guy cut by CAR and OAK, brought in off the street for Week 16.  He converted 23 carries for 123 and 2 scores.  And it seemed like even more than that.  DAK! was able to cut the 2nd half margin twice to 8 points – but Baby Buster converted 3rd and 7 after the 2-minute warning, and LA never gave the ball back.  30-22 is your final, with N’Awlins likely hosting RRRRRRRRRRRRRAM IT!! in a regular season re-match, for all the NFC marbles.

Yes, my #ShameBet received a stay of execution, for which I am most grateful.  Not particularly hopeful it will amount to any more than that, with the offense still out of rhythm and the team overall seeming nervous as fuck (just like last year’s playoffs).  But we will just have to wait and see.  A new week is a new week.  Change is the only constant.  Everybody but KC looks vulnerable – and we’ve seen them be plenty vulnerable.

Chargers/P*triots – Man, fuck Dean Spanos for making me have to root for the Patriots. 30-16 Patriots(ugh – I feel so dirty)

Cowboys/Rams – “GUMBO GUMBO GUMBO!!!” versus “Ayyy – I got your gumbo right here!” 23-7 Saints; only 18 references to the Super Bowl power failure.

Scammed Diego/Fuck You – [a howling wind filled with unearthly screams].

Beignets/Wawa pork rolls – just keep telling yourself it’s only a game and don’t look behind you.

P*triots/Chargers –  The Chargers get off to a roaring start, then their RB gets hurt and pedals away the rest of the game on the sidelines while the Patriots storm back.  On the plus side Dean Spanos loses.  24-13 Fahckin’ Patriots.

Saints/Eagles –  The Eagles are only here because the Bears employ Stephen Hawking’s corpse as a kicker.  The Saints have been firing on all cylinders, the Eagles are that pick-up slowly sinking into your asshole neighbor’s front yard.  24-13 Saints.

Bolts/Pats – Rejoice one and all! Pats go one and done as the more complete team takes a surprising victory on the road. Chargers 34-30 – which sets the stage for… (impossible outcome dreamed of – Carson hosting AFC Title Match)

Philly/Saints – Way too much Brees and dome field advantage for Biggus Dickus Nickus to overcome. Saints 38-17

Chargers/P*triots –I was all ready to pick the Chargers, as Laserface has somehow morphed from angry prick to lovable old curmudgeon. However, the Patriots are at home and it’s going to snow. Even this Kidz Bop version of the Pats should win. NE 23 LAC 20

Eagles/Saints – The Saints beat the Eagles 48-7 eight weeks ago, and the game wasn’t as close as the score indicates. But these are both different teams now. The Eagles have found their mojo, and the Saints have averaged only 19 PPG in their last 5 games. Now, if the Saints score 19, the Eagles will win. However, the Saints are still the better team here and will not score 19. Nobody wants to be wrong more than I do, but… NO 31 PHI 23

LAC vs NE – Please, please, please let a meteor hit the stadium just after kick off.  Float boy has enough spawn that one will survive to keep the name going.  If not, I think that the Chargers win this one in a tight game.  #TeamMeteor

PHI vs NO – Bresus holds serve and BDN goes home with a bad case of black and gold balls.

Clippers du Merde/P*ts – We got Andy Reid pissing in the Narrative wind and howling with laughter, plus Two of the Good Ones saying “fuck” on teevee yesterday.  We are due a heaping helping of poop, and Clippers du Merde playing their 2nd straight 10am “body clock” game is a bridge too far.  Especially with Laserface not playing very well since their win in Arrowhead (but oh, what a re-match that would have been).  NE 34, CdM 17

Iggles/Saints – This line seems too big, even if N’Awlins did dry hump Philly 48-7 during the regular season.  Not the same Iggles side, with Big Dick Nick in the saddle.  But I am in favour of shattering narratives this playoffs, and he really ain’t a magical unicorn.  Neither is that still-dicey for the playoffs secondary.  NO 35, PHI 20

Volga BOLTMAN/P*ts – Team that loves the road vs. team that seems to score all their points at home, as the home/road splits are Coors-esque. Even the Eldritch that is BOLTMAN can do so much against the constant for that is BLEERGH, so I pick the P*ts because we can’t have nice things.

I did the Iggy/Breesus and Pals – Foles and the Big Dick Brigade may put up some points but ironically may not have enough D to stop the Saints.

Balls of Steel and Fury:

Chargers-P*ts – The Pats will win because we can’t have nice things because I touch myself. A lot.

Saints-Eagles – I really like the Eagles and I think this will be the best game of the weekend. Saints at home, though, are tough to beat. Saints by a field goal.

Chargers-P*ts – Chargers beat Patriots because I can dream.

Saints-Eagles – Eagles beat Saints because Nick Foles is a postseason magical unicorn only his horn’s not on his head.

Chargers-P*ts – The soccer stadium NFL team will squeak by the P*ts on a Marmalard float to Hunter Henry.

Saints-Eagles – Alas I will bet on the Iggles but I dont think jenkins and the 3 homeless guys can cover the Saints.

I look forward to you all renaming my parlay “Terry Schiavo” by halftime.

I was gonna go with another Florida classic, “Astronaut who drove across the country in a diaper.”

Because it’s moving quickly but constantly on the verge of shitting itself?

Hey I didn’t say it.

Nice that a bunch of conservative assholes are trying to save it!

I’m high on bath salts and diesel fuel, and I have to teach a Sunday School class in 25 minutes.

You think you’re fucked? Ha ha, I can do it and they’ll love me.

Preach the gospel of BOLTMAN and the cleansing ritual of Blood Lightning!

That anus bled for our sins.

Have both teams to score and manure to win this one. Should have bet 2 nil on the 1st one as I had envisioned that. That being said was very happy I didnt bet until the end.

gonna head to the local bar to watch this pats game.
Also, ZOT ZOT!!!!! eaters get the W! Cool!

Found a funny:
[forgetting the name for leaf blowers] Do you have any wind bazookas?

I’m pretty chill about the Chiefs winning yesterday, but I am a little bummed that they finally broke their 25 year streak of not having a legitimate win in the playoffs.

Just wait until they lose to the Chargers!

YOU MIGHT WANT TO MARK THE OPEN GUY IN THE BOX!!!!!

Hold on you blue motherfuckers.

Just made some scrambled eggs w andouille sausage and cheese. Have the house to myself so I am going to kick back, catch up with all the news papers I didn’t read, and play my ipod far too loudly.

See you at the games!

I’m going to pretend to work out!

curious sub, yes take Bernard off but Theo never, ever tracks back

given my luck, I do need to go bet on a Cherries goal

the other (“we don’t care what the Redshite say, what the fuck do we care”):

Where’s the equalizer you cunts? C’mon boys draw like you mean it!

Look at BFC all stylin’ in Vegas! You know he’s still passed out, right?

I love morning in Las Vegas. The desert is beautiful, the breakfast buffets are sparsely populated, and the cocktail waitresses in the sports books aren’t busy, so you can chat them up over bloody Mary’s. 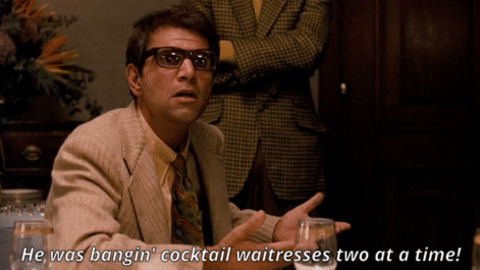 The rearview camera had some mud on it.

I’ve seen this! Now he fills his parents house will hookers and his buddies to pay for the damage, right?

This is when you escape through the windows because that car door ain’t gonna open, especially if it floats that well. Break the side window glass with your skull, or even better with someone else’s skull.

$100 spent at the local burlesque house (if Bearistocrats! or RRRRRRRRRRAM IT!! fail to win NFC)

I know a burlesque dancer! Used to work with her at a pizza joint in Virginia. She started burlesque in Richmond & then moved to Brooklyn. Her stage name is Boo Boo Darlin’.

Well that seems to be a very practical way of insulating yourself from jeers.

Shhhhhh, don’t remind them please.
I don’t wanna have to go back to the titty club.

SillyCuse sucks balls. That is all.

Hippo I bet on yous having a clean sheet and winning. MAKE IT HAPPEN.

I put in 0-0 in Prediction League because that is my default “fuck knows” setting.

Not sure we’d clean sheet a proper pub side at the mo.

I really want to punch that guy.

If, by “punch” you mean “put a Javelin anti-tank missile through his chest,” I’m right there with you.

Let’s play some fookin’ football! Gimme all the home teams: Toffees, Lassos, Dreamboats, GUMBO!
I’m gonna shovel snow till the hippo/yeah right derby. WOULDN’T WANT ANYTHING TO IMPEDE MY PARENTS’ JOURNEY OUT OF HERE BEFORE MARMALARD V THE HONKIES, NOW WOULD WE?!

@BeerGuyRob, I made myself root for the Rams just to spite the Cowboys. You can do the same with the Chargers. Once the self-rationalization kicks in, you hardly even feel bad anymore!

Who is ready for Everton v Cherries. 3 commentists raise hands and the rest get their bloody mary’s/mimosas ready for day drinking.

/tWBS falls back to sleep.

I wish I had that luxury.

I have since been fixed. Was ok but the smoke coming from the nutsack region was a bit unnerving.

When I asked for the cone around my neck the dr thought I was weird. Then Mrs Cola walked me out of there on a leash. We showed them.

Mola Lookman gets the start! ALL ARE EXCITE