I sat on a jury years ago, 2nd degree attempted murder case. One day the defendant wore sneakers with his suit to court. It was that day I knew he was guilty.

Tyrel Jackson Williams: Welcome to this weeks edition of The Wednesdayer, coming to you every Wednesday right here at DFO.

Peter King: Well, until we get picked up by a larger corporate partner. I mean, what is this even? A podcast? We on the radio? Is this a written thing? Or are we just two guys having a recorded conversation?

Williams: ACTUALLY Peter, we are very happy here at this boutique website. Though we do obviously touch on the NFL — the main premise of DFO — I’d like to remind our audience that The Wednesdayer is a Peter King Production that focuses mainly on your love of various forms of construction and home improvement; a new feature for a website that focuses mainly on dick jokes.

King: Speaking of travel, I’m on the road this week for a little three-day event called the NFL Draft. Ever heard of it? It used to be in New York City every year at Radio City Music Hall but is now changing venues each year as the NFL continues to improve its brand and relations with all US markets.

Williams: For our guests who don’t follow the offseason so closely, would you like to give a hint as to where you are this week for the 2019 NFL Draft?

King: Everyone knows it’s in Nashville, Charles. Look, there’s late season hockey, NBA playoffs first round, April baseball, and Mueller’s report completely exonerating the President. Of course the most interesting event in the US is the draft this week. I mean, it’s going to be the largest event in Tennessee history and that’s a pretty impressive draw considering this is a state that used to auction off a quarter of its population at various slave auctions. Which, if I could just talk for a moment about the misrepresentation of slave conditions in the 19th century —

Williams: Actually, the US federal government — the “Union” — led reconstruction efforts that many would argue were far from adequate, which has left Appalachian whites in a hole for which they have embraced a victim mentality and focused on the —

King: Yeah yeah, they hate kneeling. Whatever. I don’t care for it either but let’s not lose focus of the wonderful job the NFL has done here in Nashville with setting up this event. I mean, flag or shield? I know which one I am going to stand behind when the bullets start flying.

Williams: So tell us a little about such an undertaking. That is, putting up a temporary structure to host an event in a major city with consideration for inconveniences to the populace and minimizing costs.

King: Well, inconveniences to the citizenry is just a myth. I mean, this is the NFL Draft. We’re talking about shutting down a couple streets for a few weeks when the good people of Nashville would gladly give their banjo-pickin’ hand just to get one of those sharp Tennessee Titans draft day hats.

Williams: Well, they can. I mean, those hats are available.

King: Damn right they are! Just $37.99 too. And with the draft tickets being free, $40 in Tennessee gets you a sharp new Titans hat and an individual cigarette. And no better place to enjoy a cap and smoke than Cumberland Riverfront Park taking in a view of Nissan Stadium while watching crews erect this gorgeous stage. At 460 feet long and 70 feet tall, this is a massive operation for the NFL to manage in such a short time frame. I mean, the city of San Diego took years of trying and still couldn’t even pump out the necessary upgrades to Qualcomm Stadium. Then the league steps in and shows everyone just how it is done.

Williams: So what single attribute to this project is most impressive to you, Peter, as an expert and insider who may share something our listeners may not be otherwise familiar with?

King: Look, building a stage is nothing new. It’s been done for centuries. In fact, I think it clearly makes my point that the stage itself is no major contracting feat and, if I could direct your attention to this tasteful illustration of a Tennessee slave auction that innovatively used a simple table as a makeshift stage, you’ll see how — 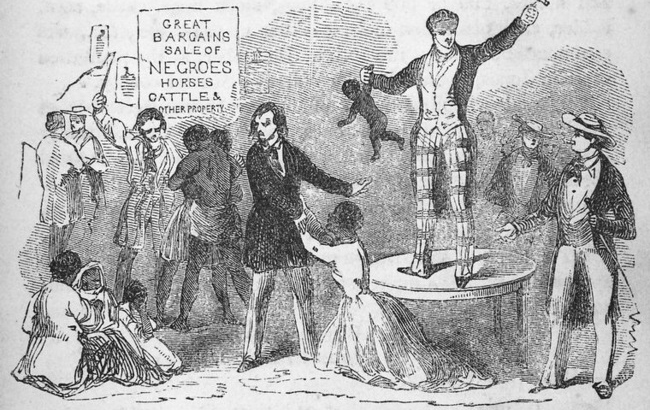 Williams: No. We can’t keep going back to this.

King: It’s not like the Draft is a slave auction, Charles. You and I both know the owners narrowly voted down Bob McNair’s proposal on this matter.  But skipping ahead, I’m just saying that the greatest challenge to a project like this is keeping the uninformed public out of the way. Now, I’ve got Twitter so I know how people like to complain and, what was the biggest Nashville story when construction began? Was it the thousands of jobs? Was it the millions in revenues? The exposure to the rest of the nation that Tennessee is more than just country music, Financial Peace University, and slave auctions? No — it was naysayers complaining about the need to remove some 21 cherry trees. And this is why these types of public works projects cost so much. The NFL worked directly with the Nashville mayor’s office to secure all appropriate permits for this project just to get into the thick of construction and, BAM!, the complainers are saying uprooting these trees — which were very much in the way — would have a lasting impact on the city. So the NFL, being the generous kind souls that they are, planted 40 trees at area schools and are supporting efforts to plant over 100 more before this all over.

Williams: But there is a difference between mature cherry trees downtown and young ones in area schoolyards. Especially for a city that hosts an annual festival celebrating these trees. Shouldn’t there be consideration for this annual revenue, considering the NFL Draft is a one-time event for Nashville?

King: Well of course it’s not going to return to a place like Nashville that keeps making up the rules as they go. That’s the problem with these small towns though, you’re dealing with backwater lawmakers that are better suited to run an HOA than co-host a major NFL event. You want to know why the Titans aren’t hosting any 2019 prime time games? You’re looking at it and it’s pink leaves. I know Earth Day was this week. I love the Earth. But, come on, this is the NFL Draft. If you aren’t willing to transplant a handful of trees, how committed are you really to this franchise? I don’t know and, I’m just spit-balling here, but maybe Nashville is more of an Alliance of American Football city?

Williams: So, I guess to end on a high note, what events are you enjoying in Nashville in the days leading up to the draft here?

Williams: Okay! So, listeners, I hope you all appreciated Peter’s warnings about the unexpected costs of public demands when you’re considering crashing your schedule to make serious performance deadlines. I’m sure we’ll get more wonderful insight from Peter next week on The Wednesdayer. We’ll see you next time.

blaxabbath
I sat on a jury years ago, 2nd degree attempted murder case. One day the defendant wore sneakers with his suit to court. It was that day I knew he was guilty.
Please Login to comment
2
2
0
4

Dan Snyder likes the part about cutting down trees.

Those damned cities, having codes and guidelines. What the NFL should do is have its own city to have the Draft, and the Super Bowl, and the Pro Bowl. And hell with it, there’s all these other cities with building codes and local unions, move all the NFL teams to that city, and build 16 identical stadiums, down to the seats and the signage. PSLs will of course be compulsory, as will attendance at games.

why stop at cities, have it’s own country and then they can make their own laws, and do whatever they like. Not that they are limited now.

PK WISHES he was president. MOAR LIKE Press Secretary.