NFLPA is anticipated to file a grievance against Texans over the position assigned to franchise DE/LB Jadeveon Clowney, per league sources. The Texans labeled Clowney a “DE/LB”, but a LB tag carries a $1.698 million lower salary with it than the DE tag would. So issues on issues.

Sources: Wing Tuesdays are back at Buffalo Wild Wings starting today. Deal is buy one, get one free on traditional wings for dine-in customers and will be every Tuesday. #BWWPartner

Nice to see the unbroken commitment to accuracy in journalism.

Wow – I apologize to last week. There’s less than fuck-all on tonight.

Beerguyrob
A Canadian man-child of indeterminate age, he stays young by selling alcohol at sporting events and yelling at the patrons he serves. Their rage nourishes his soul, and their tips pay for his numerous trips to various sporting events.
Please Login to comment
18
59
0
20

I know those four words are English, but the context seems incorrect.

MOTHERFUCKER IT DID IT AGAIN!!!!!!

I’m sorry guys, Looks like my Wednesday stuff is not going to happen this week. I don’t know if it’s wordpress. my laptop, or just shitty hotel internet. But every time I write something, it dies.

I’ll have you for Friday though. Probably.

I wasn’t gonna’ read it anyway so we’re even.

Yeah you were. You love me.
And it was your idea to begin with.

And btw, it hasn’t even gotten good yet.

THAT’S WHAT SHE SAID!

It’s been what they ALL say. (sniff)

Of course I read them.

Damn, put those away before you poke someone’s eyes out!

That’s probably your mother, if not your grandmother. She has nice tits.

This is a VERY Howard Hughes shot at RKO in the 1950s.

OH god son of a mother!!!!!
Wordpress just ate everything I’d written for tomorrow.
OK, my stuff for tomorrow is going to be very brief. I ain’t writing all that over again tonight.

Why are you being so mean tonight?

Because I can’t deal with my real emotions of sadness and loss that your post tomorrow is going to be less than it could be. I enjoy your posts regardless, but to now be faced with reading one whilst knowing it could have been better will be bittersweet.

Let’s have a moment of silence please. 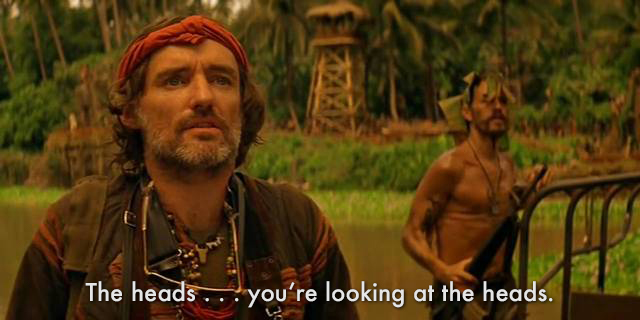 To be fair, several people showed up in Viet Nam who were expecting a party or a disco.

Don’t worry, I’ve come up with something.
it’s going to be short, but you’ll be able to laugh at me.

It might be short, but it sure is skinny.

This is the ‘But the dog ate my homework’ of not saving a file on your hard drive.

At lest you could have used the “My laptop was murdered in a bar in East Baltimore, and I was drunk enough that I can’t remember what I wrote (please see comment below before you get all judgey, people).”

See now; this is what edging does for you; I was easily able to make it 38 seconds in. Thirty…….eight…. seconds…. people. I’m a regular Sting.

Good news. I didn’t get murdered in East Baltimore tonight.
Well, I say it’s good news, but I suppose it depends on whom you ask.

But walking into a bar in East Baltimore and being the only whitey in the place?
Why do I do that stupid shit? But at least nobody shot at me this time.

Let me guess: it involves a woman.

And a guy named Gerald.

Would you stop that already?
Oh wait, this is the hotel she works in.

I’m going down to the lobby to check. BRB.

Apparently she’s not working tonight.
And no sign of Gerald either.

Gerald is terribly unreliable. But his meth is always good and clean.

Hey, Gerald already got some love in the mailbag: https://www.doorfliesopen.com/2019/07/16/mouth-flies-open-dfo-advice-mailbag-14/

I like to go to dive bars. East Baltimore has some great ones.
One night, when I left one, as I was making my way out of the ‘hood, a gunshot rang out and shattered the rear window of the 4runner I was driving at the time.

Probably about 25 years ago. Obviously I didn’t learn my lesson.

Seamus, shortly before he was shot at:

Murdered? Don’t be silly; we all just wanted you to get violently pegged by a tall stranger.

I was hoping you’d edge a little longer.

Edging is some millennial bullshit. I gotta strike while the iron’s hot.

It takes longer than 17 seconds for an iron to heat up.

Angels are up early 6-0 over the Astros. They’ve been absolutely on fire since the tragic death of Tyler Skaggs (still no cause of death announced). I know correlation does not equal causation but something’s different.

everybody’s worried that if they cool off, management might kill another one, light a spark

I mean, Pujols has had a good run and all.

I just took a hot summer afternoon nap. It was beautiful.

Yeah, I don’t care what the haters say. Day-drinking with Darren Sharper is fun.

Don’t look now, but somehow if the season ended today, the #BFIB would be in the playoffs. Which would mean October el beisbol would actually matter in 2019.

Oh, well. At least you’re not the Cubs.

On the “summer jollies” front, I ordered “One Long Night – a 100 Year History of Concentration Camps” off Amazon.

On one beach vacation we got the entire family around for “The boy in the striped pajamas”. Not the fun kid-friendly romp we were expecting

Did they have a blooper reel?

Holy Fuckballs, I thought they made those things illegal years ago.

We closed on a house on Saturday. We were looking for another TV. We came across one for quite literally $70k. The one star reviews complained about not getting delivered in time, the other was upset with the quality.

I’m thinking those three negative reviews for a TV that costs triple most of our car payments are the Trump family.

If a TV costs $70k, I fully expect a group of actors to come out of the set and act out the shows as I channel surf.

You’d think that the folks over at the new “Naked Coeds Play Beach Volleyball” league would fill this sports void but just like Caitlyn Jenner, they dropped the ball.

Jack Flaherty against the Dirt Stillers. Sorry, WCS, Tyler O’Neill is still in the lineup!

blaxabbath did just move there…

There also an outbreak of Syphilis in Alberta. Are we sure the pub crawl wasn’t up there….

It’s real easy to sit through 5 hours of Japanese wrestling a day for the month of July when it’s up against such things as “lol Brock Lesnar again” and “What If Kawhi signed with the Lakers instead?”

I’m rewatching Chernobyl. It’s more uplifting than anything else in the news or sports right now.

what, Epstein’s child fucking ring doesn’t give u teh jollies??