I’m perfectly willing to admit it when I’m wrong.  I’m wrong a lot.

Back in the pre-season I predicted that the Panthers would go 5-11 and end up in last place in the NFC South.  Well, they haven’t hit 5 wins.  Yet.

I also predicted that Will Grier would take over under center.  He didn’t.  Yet.

Well hello Kyle Allen.  Where the hell did you come from?

Beginning the season, it looked like I might have overestimated the Panthers at 5-11.  An 0-2 start and Cam went down.  Then Kyle Allen showed up and steadily, if not with flash, led them on a current four game win streak.  They’re currently sitting at 4-2 in the NFC South, just one game back of New Orleans.

Do they have what it takes to overtake the ‘Aints?  No.

But they just might have enough in the tank to get a Wildcard.  And here’s why.

Cam Newton reportedly will return after the bye week.  And even if he goes down again (he probably will), Kyle Allen knows he can now play NFL ball and manage the offense.

McCaffrey continues to make folks miss when he gets touches, and so far has managed to not get brokeded.

Greg Olsen is back from injury giving an outlet valve when the decimated offensive line becomes even worse later, regardless of who is under center.

And last but certainly not least, the Panthers defense hasn’t always been stellar.  But they’ve been good enough.  9th in scoring defense.  11th in total defense.

Oh, and I also had predicted that Ron Rivera would be canned by week 11.  That’s looking very unlikely now, but we’ll see.

Maybe I was wrrrrroo….cough cough.

They haven’t hit the meat of the schedule just yet.  Road games at San Fransisco, Green Bay and New Orleans loom large.  As well as a home tilt with New Orleans to end the season.  If they can manage to steal even one of those, and not stub their toes elsewhere (No pun intended Cam), then a Wildcard berth is very possible.  But they’ll need to stay healthy-ish.  And they’ll need to adjust back to Cam Newton under center.  At least for as long as he stays healthy-ish.

Close, but not close enough.

theeWeeBabySeamus
An unapologetic, even if often manic-depressive (it's a requirement given his choices of sports teams), fan of NC State University, the Baltimore Ravens and the Baltimore Orioles. When not parked in front of the computer and/or TV, can often be found on the golf course shouting obscenities to no one in particular.
Please Login to comment
3
14
0
7

Every time I hear Joe Buck say “spoiled it” I presume he’s talking about what he himself has done to the whole goddamned broadcast.

I am just proud to say that, as with Dwight Howard, I correctly predicted that Cam would come into the NFL and be a huge and fascinating sideshow with loads of potential but, ultimately, is just not a guy to lead a team to a Super Bowl title. 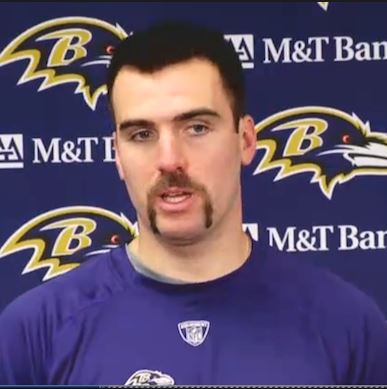 Baltimore has a gay steelworker on their team?

That episode is just classic start-to-finish.

“He prefers the company of men.”

Where do you stand on the “should Kyle Allen keep starting when Cam Newton is healthy and I swear this is only about football not the fact that he’s a–wait, what’s the word I can use now, is it POC? Whatever, I’m not racist, I have a black friend in my fantasy football league, so it’s ok that I don’t want Cam to come back, right,? He’s just too flashy” debate?

The cover you are looking for is “hot hand.”

You want to go when further and get into the whole running QB debate?

And why they all tend to be black?

So he may be a racist, or at least was racist, but Josh Allen has done a lot for race relations by becoming the poster child for run-first questionable-decision-making-on-passes quarterbacks.

But then if you put Newton back in just so you don’t seem racist, as some folks seem to think almost everyone is, even though he’s lost something like the last 6 games he’s played and looked awful doing it, isn’t it tokenism? Is there any way out of this funhouse of mirrors that doesn’t make one a bigot? I guess all QBs will have to have the same colour backups so we can avoid this mess. Or just play the guy who wins.

I hope this man who wore a Colin Kaepernick jersey to a Trump rally yesterday has a good weekend. pic.twitter.com/U9cPlpRhhy

“Is there any way out of this funhouse of mirrors that doesn’t make one a bigot?”

Have you considered bourbon?

Or I guess you would call it “bourboun”

I used to consider it quite often. Now I mostly consider rye.