Welcome to the last full, meaningful Saturday of wall-to-wall footy.  Cherish it, as September is a long-assed time away.

That was theme-free Kurt Vile.  You will RESPECT him.

Everton finally ripped off the band-aid and gave Marco Silva the sack.  It is indeed very depressing to be in 18th position, entering a hopeless home tie with Frank Lampard is a TORY Cunt Chelsea (7:30, NBCSN).  Yes, I will still set my alarm super early for it.  We’re gonna get battered.  The sooner we get a legitimate, full-time replacement, the better.  FUCK OFF, David Moyes.

The goddamned Redshite visit the South Coast for a snuff film against yeah right’s Popped Cherries (10:00, NBCSN).  Spurs/Burnley and Moose Hornets/Palace are your dire alternate offerings on NBC Gold.

At least you get a cracker for your Spotlight Dance (12:30, NBC) – the Machester Derby!  City are home, but in dreadful form.  United come off a yuuuuuuggggge mid-week win over Mourinho’s Spurs (fuck me, never thought I would catch myself actively rooting for United in such a matchup, but there I was – fuck off Darkest Timeline) and will have that always coveted “nothing to lose, really” feeling.  Looking forward to it.

The Consent Abstinent try to avenge their crippling home loss to Steerfuckers North.  It might be a fun fixture, but hopefully Team Secular Big Love will have already won Friday Night, to remove any playoff implications.

No, I was nae consulted regarding this apparent Ragin’ Cajun name change.  I was already going to be pulling for Happy Appy (and former NC State offensive coordinator Eli Drinkwitz, who I TOLD WOLVEN SORT they would miss dearly) anyway.  Fuck, I like being very occassionally right.

Didn’t we just see this?  I hope I didn’t eat any of the brown acid.   Fuck the American Whatever Conference.

Now we are cooking with gas!  Dawgs get in the playoff with a win, though I expect Orgeron’s bunch to murder-kill ’em.  The 30-minute delayed kickoff on CBS means it really super-duper TOTES means MOAR.

You can beat the Rainbow Warriors by 70 if y’all want.  Ain’t nobody care about y’all Smurf Turfers no more.

I see that Wahoowa is actually ranked.  That’s awfully cute.  Line has shrunk from 29 to 28.5, so excitement and tension surely await!

The top of the pyramid is so shitty that 2-loss chucklefuck Bucky Badger is #8.  At least this matchup includes Gus Johnson.  Hopefully?  This would have been way more fun with Row teh Boat guy.

Yet, Barcelona remain in first place tied in points with Real Madrid but ahead on goal differential.  Sevilla is third with Real Sociedad and Athletic Bilbao representing the Basque Country in 4th and 5th.

Keep in mind that Barcelona and Real Madrid still have to play the Clásico that was postponed from earlier in the year.  Today, Real hosts lowly Espanyol while Barcelona hosts Mallorca.  I expect no changes in the standings until next week.

I alluded to this last week, but it bears repeating:  In the Liga MX playoffs (knows as La Liguilla), the number 5, 6, 7, AND 8 seeds all won their matchups and thus progressed to the semifinals!  That has never happened before!

On top of that, in the Juegos de Ida (first legs of the semifinals), #8 seed Monterrey beat #5 seed Necaxa 2-1 at home while #7 seed Monarcas de Morelia beat #6 seed América 2-0.  The Juegos de Vuelta (second legs) begin tonight in Aguascalientes and finish tomorrow in El D.F.  Should the Ida results hold, we would have a #7 seed playing a #8 seed for the championship!

All I have to say to that is,

He’s ashamed of giving stuff away for free, have you had him checked for Americanism yet?

Time to get busy on a Saturday in du Plateau-Mont-Royal!

“Excuse me, mademoiselle, would you like to see my balls? Is that a no? How about my feet? They are also impressive looking today. Yes? Yes you would? Hot dang !” 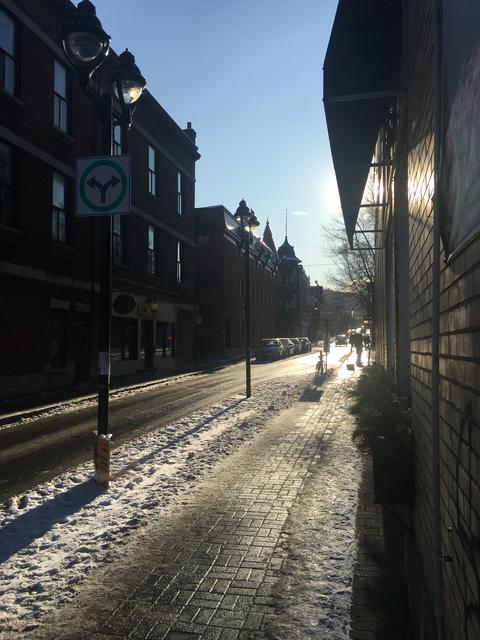 Two of the four commercials that they’re showing during this game feature Derke Jeter and Alex Rodriguez; it’s too bad the Saudis didn’t miss their target by a few thousand feet 18 years ago.

This pretty hot night nurse I’ve been chatting up lately invited me over to her house after her kids leave for school Monday morning for breakfast and to help her move a cabinet.

I’m trying to figure out if either of those things is a euphemism.

They both are. Have fun.

I couldn’t believe it really happened to me…

“I’d hold out until she asked you to make the earth move.”

Yeah, my boss pointed out that this exact thing was in “To Kill A Mockingbird.”

I met a very cute girl in Montreal today who applied molten hot wax to my nut sack and then tore the wax off. Now a middle-aged Vietnamese woman is cutting my toenails, also in French.

Now a different Vietnamese woman is sanding the soles of my feet with a citrus peel zester. 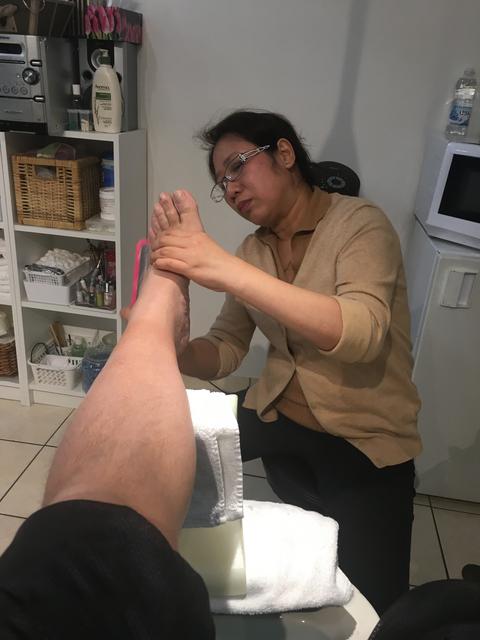 If a harrowed looking lawyer guy comes out of the back office and leaves hastily, you might want to get out of there.

I gotta catch the bus

Thank you for not showing an action photo of the waxing.

Have you considered giving your edema an enema?

Need a Boots on the Ground

Well they would have to be so the ladies could work.

(Baylor QB gets knocked out of the game after a big hit, backup comes in and runs the ball)
Football talking guy: “He’s gotta sacrifice his body for the first down there.”

Oh the silence at the Etihad is deafening.

Yep. Hope Foxy Footy hold on. Tottenham is a coming.

would have liked for Team Knifey to claim a European place

City are a shambles

Is this about Trump and Baltimore again?

Just applied for my NEXUS pass to cross the border easily. I am not affiliated with Scotchnaut in anyway.

back to drug muling, eh?

Well I hate my new job that I got promoted to so I will try to branch out to new endeavors.

Cuse doubling up on G Tech and it feels so good.

Boomer Sooner can has a good placement kicker. So does UGA if they win today. Could be a factor en el playoffs.

really hoping USC plays at the holiday bowl this year…

Is this the thread where I can whine and bitch about the state of SillyCuse basketball?

uh…because you wanted to save hoopsball points for MOAR important fixtures??

I bought a two month subscription for DAZN back in late August and it’s still good. I wonder if they’re making any money…

I fucking hate everything.

That will probably get you in less legal jeopardy than hate fucking everything would.

The more you know.

ALL OF THE MONEY.. but as we’re talking a Kroenke-owned team “How much can you spare?” XD
Edit: Also, told y’all that Arsenal are arseing things up more than usual, so … wake me up when the season ends (in terms of proper footy talk :D)

Well we can score, ya got any back 4 that can actually play available? We have Ream, Odoi, and Mawson but they tends to go on walkabout from time to time.

From what I’ve heard so far, our “defence” is so shite, the Browns, Dolphins and the Washington Redacteds are planning a charity single for us, so we could go out and buy ourselves some talent and/or hope

From what I can tell, EVERY fanbase is furious their side didn’t add MOAR at centre-half. I point this out to Evertonians as a reason to get off our DoF’s back, to no avail.

Mason Holgate played a blinder today, though. Zouma was bad for Chelski, maybe they sell to us in January now that they can spend again.

Barnsley and Salford City hanging in level, at least.

Now angry and turn it off.

Found a stream for Mighty Whitey but instead of what has happened the last 5 weeks, we have reverted back to ignoring the back line and now I am grumpy as fuck.

Everton apparently completed MOAR tackles than ANYONE in the Prem had since the start of the 2016-17 season. IS FOOKIN’ RIGHT!!

So I presume everyone has seen that Peloton ad that caused such a stir? Here is a sequel that Ryan Reynolds produced. This makes my day.

Yo. Sorry I haven’t been around much. I’ve been working late hours so Christmas morning puts a smile on the boys faces. I just wanted to thank everyone who played in my fantasy football league and congratulate everyone who made the playoffs. Once we have a winner, I’ll get his/her address through one of our internet dads, and send the prize money his/her way. And whoever “Cowtown Bass” is can go screw, because he/she is about to beat me for the second consecutive week to unceremoniously end my season. Well played.?

OY, you can be as flippant and disrespectful to Bowlen(‘s estate), Elway and the rest, but you must show some goddamn respect towards our owner… It’s “Mr. Kraft allegedly liked to have mature American sex workers’ fingers up his arse. Also the “slave” thing was disproven quite quickly btw but don’t let facts get in the way of good prejudice,

Geee, Mista, do you reckon that one day, if my heart is pure and I eat all my veggies I’ll feel the same pride and happiness with my Gooners? XD

You mean the same Aubamayang that’s cut off contract extension talks and seems to’ve mentally checked out already? Myeah, I suspect that this fiasco is far from over. Luckily, Arsenal are dead to me for the season unlessl they get a proper manager (and start actually playing well for a decent run), Kroenke sods off OR we get relegated..

teh relegation zone can GET PROPER FOOKED

ONE WEEK WAS MOAR THAN ENOUGH

I have more than enough depression issues, LDN JAGS did not help last winter. It genuinely ruins my wknd when they lose. It means I have a problem, get in line with the rest of them!

Sorry, but even though I know the Dawgs are gonna take a beating today, I can’t stop laughing at “@Megatron’s Butthole”.

anyone recall whether it was Drew or Ape who originally coined the term?

Hrrm, watching Everton perform their own take on Thermopylae or watch the wife perform an engine swap on her ’67 Mustang … And yet I’m picking footy for now? I suspect that I need an MRI

Hippo me thinks it will be Leeds, West Brom and hopefully Mighty Whitey. I have lived through the playoffs twice and they are fucking nerve racking.

I think all 3 clubs are superior to the pack chasing them. London Jaguras must beat Bristol Board City.

From the Addams Family?

Sidibe is such a righteous dude

MOAR liek POO-lisic if u think about it

Now if I could get a Huddersfield golazo v Leeds, I would be a pleased Litre.

Yep. Look like a League One side hosting a cup tie, but take any scraps I can gets.

As the Brits say….it’s coming (the Chelski equalizer)

The pick needs to be in the trenches, one way or the other.

Of course, I bet 90 Ameri-quid on Chelski last night. Surely the impetus for the Toffees finally putting a shift in.

lol, I was hoping to find you just once DELIGHTED at Everton at least momentarily giving you a reason to be happy an’ you bet on Chelsea?!
Also ‘olla… Guess who put 500 quid on Brighton on Thursday, btw 😀

you da MAN (also thank fuck for VAR, in your case)

Actually thank fuck that my wife put a nail through my shoulder blade (second time in 3 christmases), so I spent the whole evening first in an A&E and then numb as … well.. the Browns’ fanbase after yet another lost year

“Mistake by Keane” – knock me over with a feather

/just happy we made a soccer point