Hey, buck up P*ts fans.  Turns out it really was THEM, not you.

¡Viva El Tractorcito! indeed.  Add a jump-pass TD throw to his growing legend.  Oh, and just a buck-95 plowing fields on the ground.  And while Lamar! will no doubt be unfairly shat upon by the sportsball media (he was actually pretty damned good, just not at his absolute best), folk should be crediting the 53 players and however many coaches the Tits have.  Impressive display of FITBAW.

In order to beat the Ratbirds, you have to out-physical them.  Suffice to say, that happened in spades.  Well-timed pressures (first and goal from the 4 with 11 seconds to play especially – 14-10 and 14-6 feel way different at the half) and incredible front seven discipline.  Every man in his place.  Not biting on play fakes or misdirection.

Tennessee will be on the road next Sunday.  Only a madman would bet against them.  Fuck you, YOU have a problem!

28-12 is your final, and one can say even that margin flattered to deceive.

OK, so I started with the late match.  Santa Clara?  Did NOT have similar struggles with the NFC’s 6 seed.  Janeane was a bit up-and-down leading the offense – but with the defense playing at Saturday’s level, if doesn’t matter.  27-10, and the Tomsulas certainly could have scored more had they needed to.

Remember Tevin Coleman going MIA during the back half of fantasy season?  I guess he kept himself fresh.  105 rushing and 2 scores.  Easy peasy.

Remember everyone saying that Kirk Cousins got the “big game” monkey off his back in N’Awlins?  172 yards, a pick, and a wet fart 5.9 YPA, as Captain Dingleberry lived up to his nickname.  Yes, I liked that.

But the real stat of the game, which should have Green Bay and Seattle nervous?  Dalvin Cook held to 26 yards on 15 touches.  That is some dominating shit.  Oh LAWD, how I’d like to see that rushing defense take on El Tractorcito.  Is that the Superb Owl matchup I now expect?  Yep.  Is pretending to have a bead on what will happen next this NFL season absurd?  Also yep.

Let’s enjoy this crazy train while it lasts.  Good damned fun, this.

There’s plenty of women’s college basketball on but I remember a simpler time when they weren’t allowed to cross the mid-court line and wearing a skirt was all the rage. BRING BACK SIX ON SIX BASKETBALL!

I really want to see Chefs/Tits in the AFC final. That would just be so much fun. Not risking Buttchinski in the Owl.

Why is Sergio Ramos allowed to play competitive sports? This is a serious question. Every league should have banned him. He tries to injure his opponents on a regular basis! I am not exaggerating here.

Today he tried to cleat Correa. It was more egregious than Son cleating Rüdiger, but Ramos whiffed completely, so there was no foul.

He is a disgusting human who brings shame to the entire sport of soccer.

Litre’s Verona bid came good after all. I was waiting for better comeback price than +367, snoozed y losed.

Hell yes it had. Need Juve to beat Roma and I swept the morning in Italia.

Pondering a bet there, too.

$50-ish HT on Juve. I don’t want to have to pay attention longer than that.

Is anyone willing to post bail for me if I allegedly murder my niece? Gotta plan ahead.

If there’s no body, then it’s just a missing person’s case*

*or so I’ve heard

Remember, if you do it, you may end up sharing a cell with your brother.

But she decided she finally wanted to take a shower for the first time since she was here last weekend. Which is good because I could smell her across the room. But when she was done I went up to check the bathroom knowing full well what I’d find. Not one, not two, but three wet towels on the floor. Her dirty assed clothes thrown over in the corner. And the toilet clogged again with TP (three times so far this weekend).

I thought girls were supposed to be a bit more self conscious about hygiene.

I’m about to kill this little slop ass.

Then I asked her if she’d like me to get a brush and the hair dryer and make sure her still wet and disheveled hair was not tangled. Of course it was a big fat no. Fine, if you want your head to look like rats are nesting in it, WTF do I care anyway?

Hmm, I have a friend whose daughter started acting like that and it was an attempt to make herself unattractive as she was receiving unwanted attention at school from some boys. Once some little future incel assholes had been warned off, she went back to being well kempt and clean.

Hippo, Verona is all over Genoa. Odds still good.

Nah do Full Time too close

Verona was just playing dead for a while, and Genoa totally bought it.

Dijon have a black keeper. Damn it, should have bet them at the half, even shorthanded.

Out of the last 15 goals in City/Villa matches, City have scored…15

Hippo I am having a morning. Need me some Verona right now to keep it rolling.

City might not go for double figures. But they mostly certainly could if they wanted.

Mass exodus by Villa fans in the 29th minute.

It’s not a problem if you put a little bourbon in your coffee, is it?

Man, you came to the right place to ask that question expecting an enabling response.

Know your audience and don’t ask questions if you don’t want to hear the answer.

Why would you ruin the taste of your bourbon?

I don’t have a good answer to this.

You can thank the Jets or you can alternatively thank the Steelers. If they hadn’t shat the bed in New Jersey, we wouldn’t have had this wonderful run.

I would have been able to post MOAR “Duck Hunt” gifs, but that would be the only silver lining.

What is this 1 pm start time shit??? Some of us have been up for 5 hours already. Maybe should make some Mozza Sticks for brunch

I swear, El Tractorcito is sommet I would think old ppl were making up, if I ain’t see it with my own eyes.

He’s built like every running back I’ve made in the Madden games and abuses the truck stick just as much.

I like how he made Earl Thomas block for him.

In all fairness to Lamar!, it’s not like he went full Romonobyl. 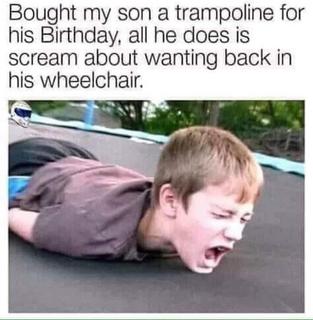 I feel like a bad DFO’er today. I forgot that there was even fitbawl on yesterday. Thanks for getting me caught up, Hippo

We will hit your nose with a rolled up newspaper.

Isn’t that excessive? Can’t we just sentence him to be like a Browns or Lions fan for an year?

Little too quick to the nuclear option, Mr. Trump.

Uh, no, the nuclear option includes Hippo, a fully charged defibrilator and reciting all the QB’s that started a game for the Browns 😀

Like there’s ANY cleaning supplies in the club house. Other than alcohol, which we won’t waste

You have a life. That’s better.

Are you ready for another Scando police series on Netflix? I am and I give you “Case”.

FWIW, I’ve stopped cussing Derrick Henry out (sorry Derrick) and fully support going all the way with the Tits.
(errrrr….you know what I mean)

You’ve always been a Tits Fan in your heart

Time to go turn on ESPN and watch Lamar! get dragged through the muck.
Hopefully not literally.

Who is up gambling on Italian futbol this morning because your spawn gets up at 5 am every day?

Hippo is the one with the problem, not me.

Someday, if I can get you both out of the house at the same time, Imma take you and Hippo to Vegas. We’ll hit a sportsbook and I’ll just sit back and watch. And maybe laugh a little.

They give you free drinks if you’re betting, btw. And weed is legal. Well not in the casino/sportsbook itself, but there are ways around that.

You know I leave the house regularly it is the Hippo fella that does nae.
Hell, with online betting we just need to set up a bunch tv’s and you can watch the hilarity ensue!

Closed Circuit ftw? But I wanna see a drunk Hippo running back and forth to the sportsbook counter.

Come on, just think of how fun that would be?

Hippo: Hey guys I can get IUPUI ML +1650 vs Kentucky. Should I do it?
tWBS: Yes, of course.
litre_cola: Oh hell yes.
Hippo: [runs away with money in hand]
tWBS: [falls off chair drunk and laughing]
litre_cola: [laughing, eats another thc gummie]

TELL ME THAT WOULDN’T BE FUN. YOU CAN’T.

Oh that would be fucking amazing. I went 4 for 4 in Italia this morning and 1 for 1 in France. Huzzah!!!

TEN won in Weeks 7 & 8 with goal line stands against Real Chargers FC and the MRSAs. Yesterday TEN stuffed BAL twice on 4th and 1. Only times this season the Ratbirds didn’t convert at that down and distance, according to the broadcast. All hail Dean Pees.
Shout out to Earl Thomas III 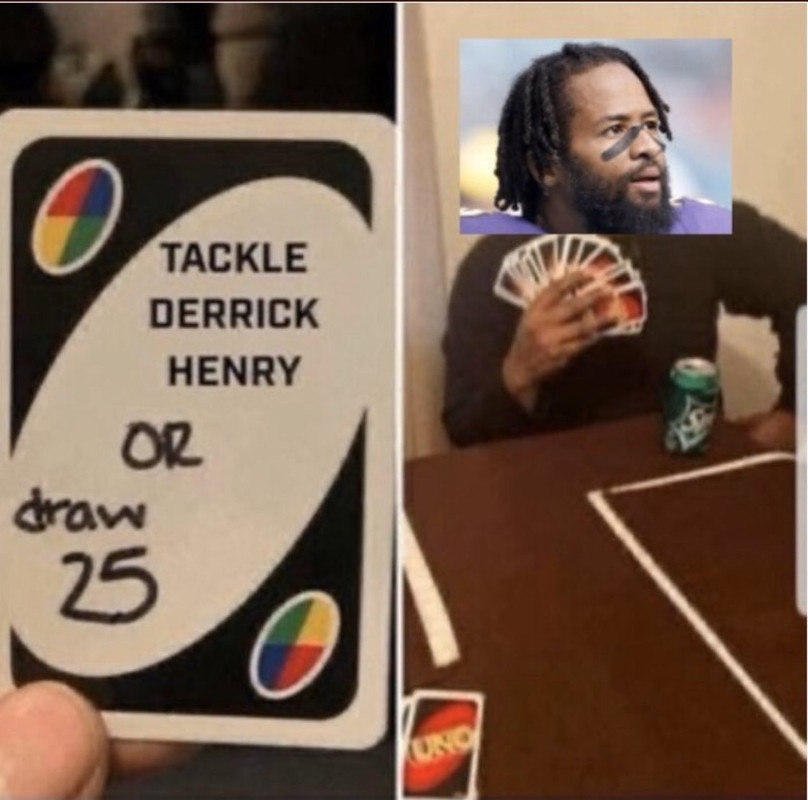