How are you today? Well, I hope.

Ready for some more lacrosse?

Since I managed to watch all of the these games, we’re doing a game recap for each game.

From Draft Kings, Chrome were the heavy favoUrite, but the Chaos did not get the memo as they jumped out to a 12 -6 lead by halftime.  What ever the pregame speech was should be bottled for future use.  Looking at the stats of the game, Chaos scored on almost 55% of their possessions.  The league average is 25% or so.  The other notable stat for this game is that their second leading scorer, Connor Fields, was a healthy scratch for the game.  They inserted Miles Thompson instead and not sure why but when compared to previous games the ball did not stay in any one stick for long.  It was a fun game to watch.  And for the first time this year, the Chaos defence didn’t leave their goalie with too many open shots.  Josh Byrne lead the Chaos with 4 goals and 3 assists.  Jordan Wolf lead the Chrome with 3 goals and one assist.

The Redwoods were the favoUrites.  This game started out very slow, with each team only getting one goal in the first quarter. It wasn’t a defensive battle, it was neither team could do much with the ball.  Also known as lots of standing around for most of the shot clock and then someone trying to  go 1 on 6 and force a wild shot.  Things opened up a bit more in the second quarter with the Redwoods leading 5 to 3 at the half.  The Waterdogs came in with the worst power-play in the league but converted 2 of 4 to make it a tight game.  The Waterdogs had a chance to tie the game late  in the fourth quater but the 2 point shot never made it through and the Redwoods scored on their next possession to put away the game 11-8.  Ryder Garnsy led the Redwoods with 2 goals and 2 assists.  Conner Kelly lead the Waterdogs with a 2 point goal and a 1 point goal.

Welcome to to Tom Schreiber show.  He was everywhere early on and it seemed like every shot he took or pass he made lead to a goal.  Archer’s lead 4-1 after 1 quarter and 8-6 at the break.  The scoring slowed down in the second half as both teams made some good adjustments on defence.  Both teams scored 2 in the third and another each in the fourth for a 11-9 final.  The game was a one point game in the 4th but Ryan Ambler made an nice play for the Archers to push the lead to 2 and seal the game 11-9.  The Atlas squandered Trevor Baptiste’s work of winning 62% of the faceoffs by commiting many bad turnovers and had poor shot selection.  The good news for the Atlas is that they have the number 1 seed in next year’s entry draft . Tom Schreiber lead the Archers with 3 goals and 2 assists.  Rob Pannel lead the Atlas with 3 goals and an assist.

The Chaos continued on their hot streak and came out like they did last game and the ball was moving all over the place, but mainly into the back of the net.  They lead 3-1 after 1 quarter and 8-3 at the half.  All this with Connor Fields being benched again. The Chaos’ defence and last years best goalie seemed to turn away everything thrown at them early on.  The Archers would close to make it 12-9 but would not get any closer for a 13-9 final. Chaos got scoring from everyone it seemed, scoring goals in transition, and in settled 6 on 6 sets.  This has got to be the goal of the season.

The Archer were lead by Marcus Holman (3G) and Tom Schreiber (2G 1 A).  The Chaos were lead by Josh Byrne who, including the goal above had 2 goals and 3 assists on the night.

And while I didn’t love that all teams made the playoffs, I do love that the team that was winless in group play is in the finals.

How would the Whipsnakes handle being off for 4 days?  Well, they came out with something to prove and lead 8-2 at one point in the second.  The Redwoods would chip away at the score and would close the gap to 9-6 at the half.  This would be the theme in the second half as well with the Redwoods slowly narrowing the score to close it to 12-11 Whipsnakes by the end of the 3rd and most of the 4th quarter. The Redwoods would get the tying goal with about 2 minutes left in the game. In overtime, the Whipsnakes did not get a shot off on their first 2 possessions. While the Redwoods returned to form and watched someone go 1 on 6 with seconds left on the shot clock for their possessions.  On the Whipsnakes 3rd possession,  Jeremy Sieverts got his first goal of the season with a beaUtiful bounce shot to win the game and send the Whipsnakes back to the finals for a chance to defend their title.  Brad Smith lead the Whipsnakes with a goal and 5 assists.  Matt Kavanagh lead the Redwoods with 5 goals and an assist.  Also strange for the Whipsnakes is that their leading scorer ( Zed Williams) and their assist leader ( Matt Rambo) were both kept off the score sheet.

They talk about lacrosse being a game of runs (no, not that kind) and this game had them  The Whipsnakes jumped out to a 2-0 lead in the first 3 minutes.  The Chaos answered back and scored 6 straight goals to make the game 6-2 part way through the 3rd period.  There was a point of almost 30 minutes of game time where the Whipsnakes hadn’t scored.  Not the game I was expecting from them.  The Whipsnakes got one back with about 5 minutes left in the 3rd quarter to make the score 6-3.  Then the fourth quarter happened and the Zed Williams show began.  The Whipsnakes exploded for 4 goals in a minute and 6 goals in 121 seconds, four of the goals coming from Zed.  There were 2 goals 5 seconds apart.  After that the Chaos defence was reeling and just couldn’t contain the Whipsnakes anymore, while on the other end the Whipsnakes defence and goalie stood tall, shutting out the Chaos for the last 22 or so minutes of the game.  The Whipsnakes ended the game on a 10-0 run to make the final score 12-6.  Well done Whipsnakes for defending the title.  They have not lost a game in over a year.  Crazy.  Zed Willaims lead the Whipsnakes with 6 goals(aka sock-trick).  Josh Byrne lead the Chaos with 2 goals.

Your tournament MVP is Zed Williams, who lead all scorers with 20 goals.  Well deserved.  It’s even more impressive when you take into account that the Whipsnakes had one less game than everyone else due to the bye and he was shut out in the Semifinal game.

COVID-19 wise, I would say that the bubble thing works as there were no cases during the tournament.  That’s good to see.  I’d also say that I like the presentation of the games, their social media presence,  the announcing crew was good and knowledgeable about the game and other than a few delays due to weather, electricity and holding metal objects doesn’t mix well, everything was as expected.  I didn’t watch all the games live, so their social media did give me a few spoilers, but with this being the last lacrosse I’m going to see for many months, I still enjoyed watching the games play out.  There’s been no announcements of what next year will look like and much of that will depend where we are with the pandemic.  I’m hoping that it’s back to normal with fans in the stands, but it’s good to know that the bubble works if they need to do it again.

And now the results of the Sterling Bracket pool.  Yes, I should never be allowed to name things.

Looking at the picks, we all had similar picks for the finals, but no one picked the winner.  I picked the final two teams, but got the winner wrong.  Not sure what the proper etiquette is here, and if I need to show my work.

Thanks for indulging me in joining the pool and for letting me ramble on about lacrosse. I’m not sure what any of the lacrosse seasons will bring, but will try to write about those once they start up again assuming I’m still allowed to post.

Game Time Decision
Recovering lurker; jack of all trades, master of none; Canadian but hates the Leafs and Jays.
Subscribe
Please login to comment
26 Comments
Inline Feedbacks
View all comments

Thank you for doing these posts!

I agree that the bubble concept works well. Hopefully they can do something similar soon and they can squeeze out another season!

You have promised this to her before.

Look, those dishes have to get done, I don’t care how long it takes her.

Morning hockey is just like any other kind of hockey — the league still invents new bullshit reasons to rule in favor of the Bruins.

While true, anything that pushes the Whalers South into oblivion is A-OK with me.

I respect all sports hatreds, even if I find that one weird.

“It is a disgusting weird fetish…..oh, wait, sports hatred? I’m good with that.”

I chose Chaos and Archers because of their names and ended up on the podium.

Hippo wants to know if he should bet on your girlfriend to win, place or show?

Watching play-off hockey at 11:00 am on a day that includes a heat advisory sees a nice encapsulation of 2020.

Just a heads up: if the term “Requblican” catches on, you heard it here first, and *I* am the one who invented it. ME!

I prefer the term ‘Q-Tards”, which I will claim to have invented but probably just overheard somewhere and then forgot it until now. 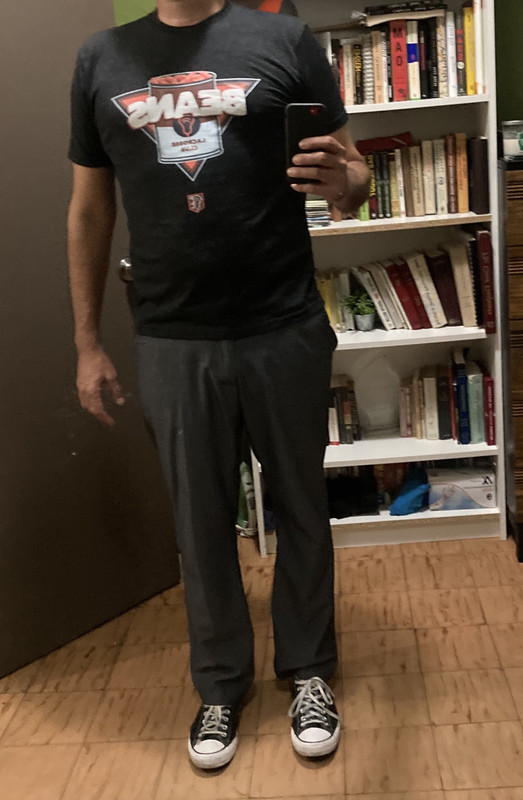 Why so formal? You have a meeting?

damn it, I’m going to need to get one now.

We need a closeup of your bookshelves. Then we will judge you!

Congrats to the Whipsnakes. And a “Gud Jerb” to GTD for doing these posts for us.