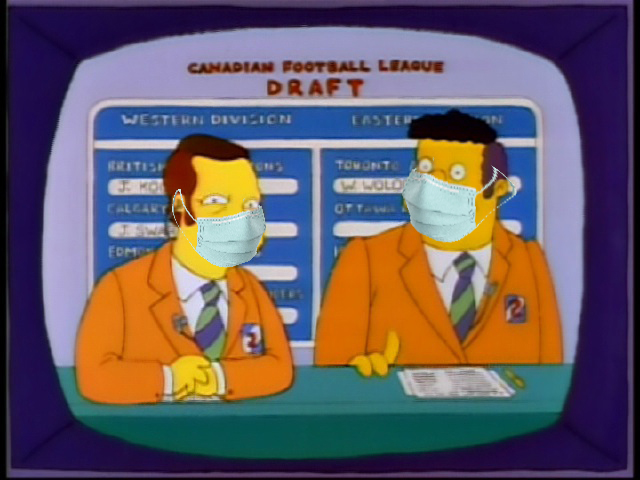 Hi, folks. With the unfortunate news from Monday that the CFL is cancelling the 2020 season, this will be the final Beat until resumption of training camp for the 2021 regular season. I am very disappointed, of course, by this news – the uncertainty over this year has lingered for months, and the only reason that the decision to ultimately cancel 2020’s games came after the league was denied a $30 million interest-free loan from the federal government.

When it comes to the issue of taxpayer money funding pro sports, you open up to some of the widest array of opinions possible, with no clearcut consensus across the traditional spectrum. Even now, I’m not exactly certain how to feel. A lot of the debate around the issue stems from whether or not you consider sports to be part of the “cultural landscape” of a nation – and if you do, whether it’s truly essential in the way that the arts, music, architecture, and cuisine are typically portrayed. Many people might argue that it absolutely is – but even for me, a diehard fan, I’m not certain I can bring myself to make that argument. Even with the loan being (figuratively) pennies on the dollar when you consider the gigantic amount of support that the Canadian federal government has offered to individuals, families, and businesses through the COVID-19 crisis, it’s still difficult to argue with the notion that the money could be better spent in other areas.

This brings us to today. Even with the progress the league and the players’ association made – with initially acrimonious debates about the merits of playing vs. not playing, weighing the risks of playing and not playing, and ultimately, the agreement on using Winnipeg and IG Field as the “hub city” model that the NHL and NBA having been using to great success thus far, even up until a few days ago, it felt like some way, some how, there might be a way to make things work. But ultimately, with a six-game reduced season, without the ability to put fans in the stands – the CFL’s number one revenue source – it was always going to be a money-losing scenario. The CFL has said they’re projected to lose between $60-80 million CAD this season – a major blow. I do believe that the league can, and will, bounce back, but there’s no doubt that they’re going to have to dig themselves out of this significant financial hole over the upcoming decade.

If there’s bright spots in this failure to play football this year, it’s that players, coaches, and families will be able to stay healthy (hopefully), and that the league will be able to get the plans for the 2021 season going now instead of waiting until later. That said, there’s tons of work to be done – players, and the CFLPA, are still upset about being left out of the league’s initial discussions about securing governmental financial aid, while the league needs to figure out ways of getting gate revenue up for the coming summer. Additionally, there’s strong rumours swirling that BC Lions owner David Braley, also the former owner of the Toronto Argonauts, wants out of owning the team, and after the hullabaloo of selling the Montreal Alouettes last year, the league probably wants to make this a much cleaner transaction, if it is indeed to happen.

So all in all, am I bummed? Tremendously. I’m also relieved for player health and safety, while worried about the long-term prognosis of the league. And through it all, I guess I’m still cautiously optimistic, too. There’s a million questions that need to be answered – and despite this being a perfectly rational decision on many levels to both A) not play the 2020 season and B) not grant financial assistance to the league, I just sincerely hope that it doesn’t mean the end of pro football in Canada. I think that there’s a ton of work to be done, but I do think that the league, and the players, are more resilient than we realize. For once, I’ll let emotion cloud my judgement on this news.

I’m still awaiting news on what school re-openings in Ontario will look like in September – time’s ticking, and nobody’s quite sure what to expect. If the workload is as intense as it’s projected to be, I may have to take a little hiatus from writing for a while – however, I’m not carrying a full courseload, so if it turns out that my courses won’t be starting until later on in the school year, I may get a chance to start on a new series sooner rather than later… At any rate, I’ll see y’all in the comments section. Peace, love, and facemasks, folks.

The Maestro
The Maestro is a mystical Canadian internet user and New England Patriots fan; when the weather is cooperative and the TV signal at his igloo is strong enough, he enjoys watching the NFL, the Ottawa Senators & REDBLACKS, and yelling into the abyss on Twitter. He is somehow allowed to teach music to high school students when he isn't in a blind rage about sports, and is also a known connoisseur of cheap beers across the Great White North.
https://www.doorfliesopen.com/index.php/author/the-maestro/
Subscribe
Please login to comment
8 Comments
Inline Feedbacks
View all comments

You guys are smarter than we are. I put human lives above everything else, too bad my government doesn’t see it that way.

I don’t even think ticket sales made the number one source of revenue in US college sports.

I find it crazy that attendance was the number 1 revenue source for the league. For a league in a country with bad weather in the winter months, that seems…. bad.

I would hope the league would restructure to make the revenue more diversified.

There’s SFA to do in the prairies, so the (outdoor) stadiums are always packed, whatever the weather.

This sucks. These were entertaining reads, and I was looking forward to finishing last in another pool.