I am typing this up during the Europa final.  Tis a race between Antonio Conte and the GOOOOOLLLLLLLL! announcer, as to who strokes out first.  Let us hope that Sunday Funday’s PSG/Bear Team final is this entertaining.

Still, though – the sporting desert awaits, until the NFL in all its malevolent, competent glory rolls in.  And hey, thanks to Roni/#NuAIDS?  My auction league is finally going to online format.  Not that I will miss the 9-hour LaboUr Day trip to Northern Virginia…but usually quite sad when a tradition dies out.

But hey, silver lining – I can bring some Commentist Party members to the Heavenly Table.  It’s full-PPR, $150 entry fee (numerous prize levels), 20-man rosters, and you get to pick up to 4 keepers each season (the maths is too complicated for me to describe right now, but once you get it, it’s perfect).  About half of our 12 have bailed (and we’d like 14), so come one, come all.  Let me know if interested, and I will e-mail with details.

Don’t have scotchy’s e-mail, but I believe he was looking for something to scratch the itch left by his Canadia buddies bailing on his auction league.  Litre might be joining, once he and the Other Litre’s get out of the forest.

I have nothing else for y’all today.  Speak of whatever y’all wish.  Donks WOO!!!

UPDATE – In the spirit of us imaginary friends of the Commentist Party, Wolven Sort Hippo Spawn and I are pictured, wearing our badass, comfy (relatively speaking) Everton masks.  Took awhile to arrive, but worth it and supports a good cause.  Everton in the Community is a powerful thing, integral to Everton’s identity as a community-focused club (as Moyesy put it – The People’s Club).

I spiked a temp of 99.8 this am, up 2.6 degrees from yesterday’s normal, lizard-ish level.  I haven’t had a temperature this high in 12 years, the winter a 30-something non-smoker had pneumonia TWICE.  Feels very similar, but pictured Spawn likely gets her test back today, and if she has it I have it.  Figure maybe a 25-30% shot, up from 5-10% yesterday.  My mind only works in numbers, when it works at all.

WEAR YOUR GODDAMNED MASK, EVEN IF NOT BULLETPROOF.  IT’S THE BARE MINIMUM YOU CAN DO AS A CITIZEN, AND IS NOT A POLITICAL ACT.

/also where is my muthafuckin’ ribbon??

Songs about KKK members trying to woo potential girlfriends are hard to come across but I think I found one.

Since they were about 7 years-old I’ve been asking my boys, (intermittently) “What Did You Learn Today?” I told them that “nothing” was not acceptable. Ever. Yesterday, as we were leaving work my oldest (17) started in on “TIL” unprompted and related to me a number of things. #missionsortaaccomplished

Scotchy’s kids learning the meaning of the word “nothing” in school one day:

[“Under Pressure” plays in the background]

Oh, how I hated the “what did you learn today” shtick. Especially because “nothing” was often the honest and correct answer — the teachers taught strictly out of the textbook, so if you had done the reading then you really didn’t learn anything that day.

You said ‘nothing’ when the correct answer, ‘teachers are lazy’ was staring you in the face.

Ah, but I had figured that out on day 1. The other days there was nothing new.

Actually, I’m even sure I think it was lazy. Teachers have to teach to the whole class, not cater to me and a handful of others who learn best from reading. The rest of the class either didn’t do the reading or it didn’t sink it, and so they actually needed the “repetition.”

Last edited 3 months ago by Dunstan
1

Day 1? You must have been in the advanced class.

monty this seems strange to me
Editor
Reply to  scotchnaut

I switched my question to “What Physical Activity Did You Do Today?” a few years ago. I want them to stay active and they seem willing to answer.

Shit. I need to do this with my youngest. Thanks.

Btw, does anyone else think that monty has the absolutely perfect pic for a lurker that occasionally makes comments? Is it just me?

I’ve posted this tune before. I’ve watched it many, many times because it always gives me something new to think about. Today? The approach to the lyrics seems to come from the ‘Cut Up” method. From what I understand, Brion Gysin pioneered this and William S. Burroughs copied it. Brian Eno then came along and adopted this technique when he was a producer for early Talking Heads albums. “More Songs About Buildings And Food” (in the running for wryest album title ever) “Fear of Music” and “Remain in Light” feature this method of ‘song-building’.

Last edited 3 months ago by scotchnaut
2

Maybe it’s because I was desperate for sports of any kind but I’m curious as to what the Raptors can do without Hawaii Lionard. Nurse is a fantastic coach and GM Ujiri has done a phenomenal job of identifying talent. From what I’ve been able to deduce, it seems as though he targets dudes that have an off-the-charts work ethic and provides them with an environment where they can do their thing/flourish. A very interesting “Anti-Multiple Superstar” approach to building a competitive team.

Hippo, is this auction league the same one the required members to submit their weekly line-ups via a thumb drive, and failing to do so on 2 occasions would result in the loss of a thumb?

Because that one scared me.

Happy to announce I just got the mail and received two (2) HRTN T-shirts and am now debating whether I want more questions at the gym about “What’s Iguana Mart” or “What are Diggler’s Donuts?”

Hey, can anyone confirm that Curt Schilling was arrested in connection with the Bannon/Wall fraud thing? It’s all over Twitter but I haven’t seen anything official and I don’t want to get ahead of myself jerking off in the street celebrating it.

99% sure that was debunked.

I was afraid of that, but good ol’ Schill is apparently on the Board of Bannon’s foundation, so hope springs eternal.

monty this seems strange to me
Editor
Reply to  Horatio Cornblower

Last edited 3 months ago by scotchnaut
4

Also, there is no sporting desert. The NHL playoffs will take us through August. AFL still has at least 2 months of action. Liga MX is going strong and the European leagues will begin the 2020-21 seasons very soon.

We don’t need the NFL.

Last edited 3 months ago by ballsofsteelandfury
0

I have been totally uninterested in the ice footy. Do need to remember to watch the mexi-footy.

Euro footy comes back around same time as NFL. That will be a really good weekend.

12th tier Monrovian Soccer match between the last two teams in the league: Hippo: “I like it.”
Hockey players breaking each others jaws and calling each other pussies about it: Hippo: “I hate it.”

Hey, not saying I make any sense whatsoever.

“Hey, the heart wants what it wants.”

Sevilla was great and they’ve now won 6 Europa League trophies (more than anyone) including 4 since 2014. That’s quite a feat!

Those are quite some feet – R. Ryan

Were indeed great, though a little more cunt-ish than I expected.

Feel awful for Big Rom, he played his heart out and didn’t deserve what happened at the end.

Stay well and be well Brother Hippo. Like you, I run a very low baseline temperature. Somewhere in the 96 degree range. Enough to elicit a double take almost everytime.

And wear your goddamn mask people.

There’s your query of the day – y r yr and hippo part lizard people? And should we have been flattered when that dude wrote us in during the recounted Norm Coleman/Al Franken Senate election??

SOCRATES: I am wiser than this man; he fancies he knows something, although he knows nothing— DARRYL, SOCRATES’ FRIEND: fuck him up socrates

An oldie but a goodie.

Does I go for a hike before the rain comes or does I procrastinate until it’s too late? I’m going back and forth between these two options.

You COMMIT to my auction league, that’s what!!

monty this seems strange to me
Editor
Reply to  scotchnaut

Gumbygirl
Reply to  monty this seems strange to me

If it weren’t for procrastination, I would always get things done!

yes padres get the W
against stupid astros
goooo baseball

I am taking Pretend Man City to the WakeMed soccer complex (their terminology) for a friendly against North Carolina FC.

This is like minor leagues for MLS, if you can fathom that.

My wolven sort spawn used to run cross country meets there. I would saunter over to the stadium sometimes, hop the fence so could take a wee without indecent exposure risk.

I woke up 45 minutes ago and figured I should do the laundry I’ve been putting off for obvious reasons.

Here ya go. Flares are in my kangaroo pouch.

Last edited 3 months ago by litre_cola
3

Here it is Hippo. 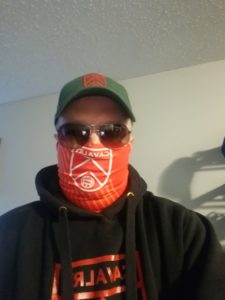 This is a dude I would TOTES riot with.

Last edited 3 months ago by scotchnaut
2

Dammit, scooped again! I was this close to finishing my research on whether copious opious opioids prevent contraction of the charcoalvirus

One more day in the forest. Decilitre was up at 5 as well but Gramma Cola took that bullet, thank Bleergh.

Morning folks! Fronkenpooper woke up at 5:00, so here I be. Went to our pre-season coaches meeting for eldest Fronkenspawn’s lesser footy league this week. Am PSYCHED to finally get to run around and play ball with the kiddos at practice. Maybe run off some of this disgusting gut in the process. Great pic, Hippo! You look just like my cousin, and your daughter is beautiful.

“My cousin AND daughter? That’s one person!”

Thanks dude. I liked playing Keeper with my charges when I coached.