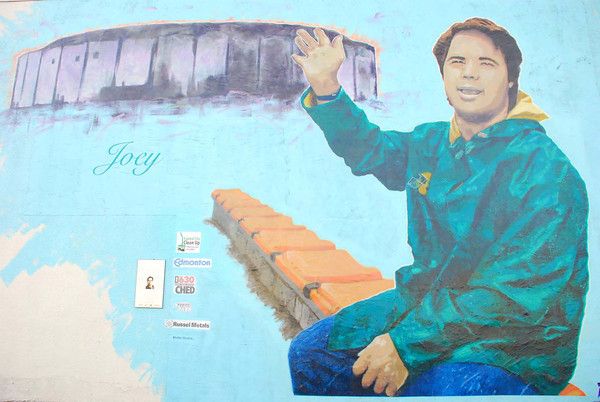 Apologies for the delay – there was a WordPress issue. Scotchy will have a ‘meeting’ with them tomorrow! 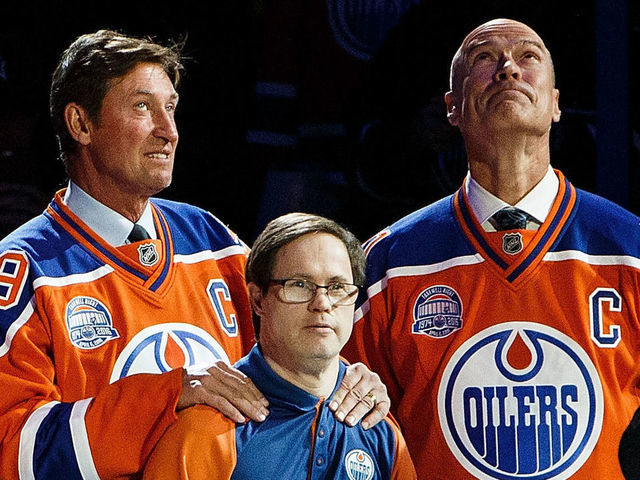 Joey Moss died Monday, age 57, as a result of conditions brought on by early onset dementia & lingering effects from breaking his hip back in July.

He was the 12th of thirteen children born to Lloyd & Sophie Moss. They were a travelling band of musicians, who travelled the Canadian West playing concerts.

According to Canadian hockey lore, he became part of the Oilers equipment personnel in 1984 because Wayne Gretzky was dating Joey’s sister, Vikki. Gretzky had an aunt with Down Syndrome, so he had an immediate rapport with Joey. The kid had a job working at a bottle depot at the time, and Gretzky would often see him outside waiting for a bus to take him to work, even when it was 40 below. Gretzky figured a kid with that kind of drive shouldn’t be just sorting deposit refundables for his whole life, so he convinced Glen Sather to give the kid a chance.

According to Wikipedia & CBC Edmonton, after the season ended, Gretzky got Moss a job with the Edmonton Eskimos/Football Team so he could build on the progress he’d made & not lose anything over the summer. He even offered to pay Moss’ salary. 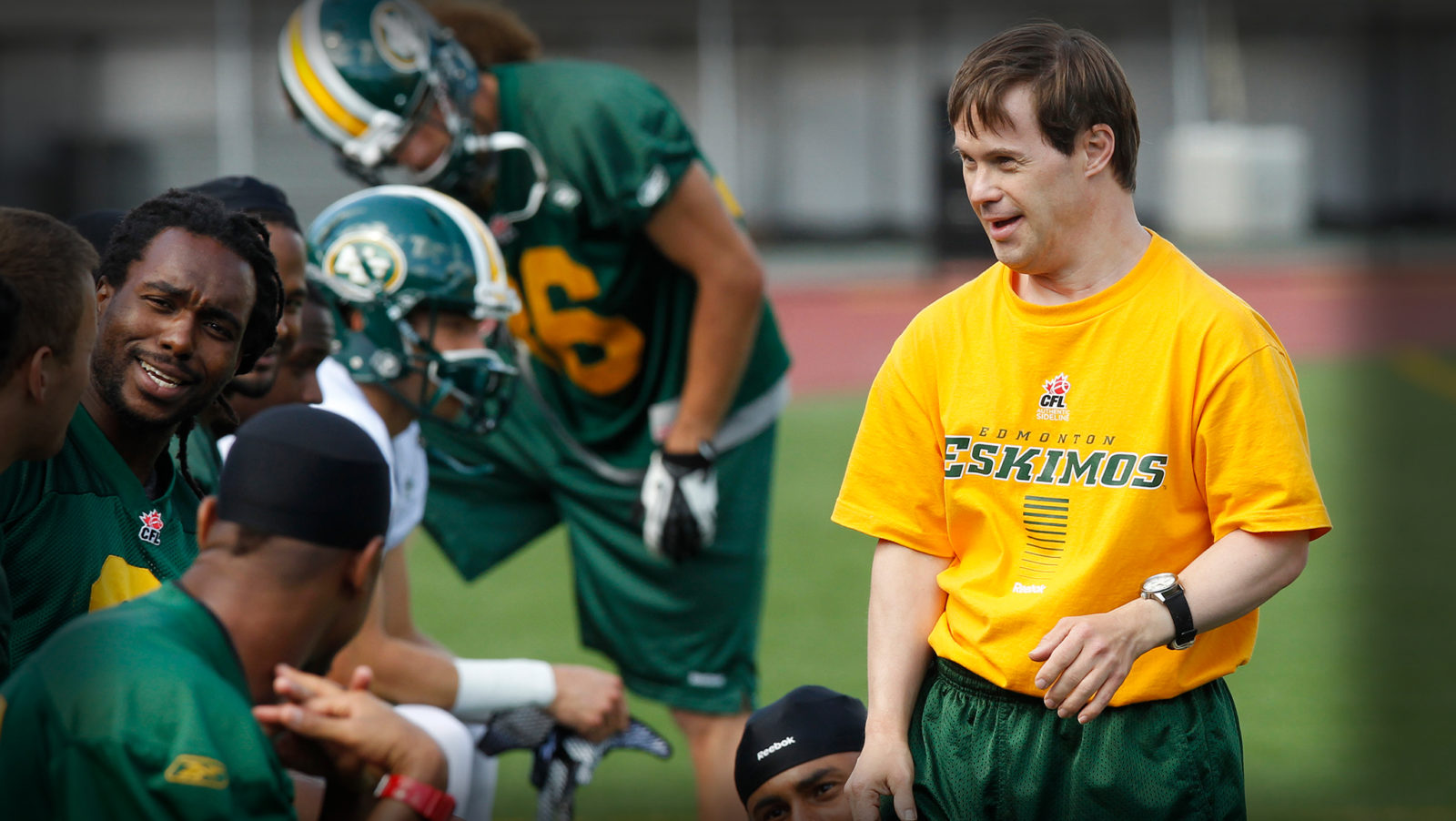 Gretzky eventually broke up with Vikki, but Joey Moss stayed with the Oilers for a total of 35 years. He worked almost every game in the locker room, and even sang the anthem a couple of times each year. He would divide his time between the Football Team – starting the season with them – and the Oilers – moving over once pre-season started – for most of his adult life.

He knew, I knew, everyone knew about the Down Syndrome. The thing was, the longer the kid was in the job, the less it came up. When he did something wrong, he got yelled at; when he couldn’t do something, he asked for help. The job he did was one that required him to be a hard worker, not be some hire they made to appease their star’s girlfriend. If that was the deal, he’d have been gone the minute Gretzky broke up with Vikki or Wayne fucked off to LA.

Janet & I are saddened to learn about the passing of Joey Moss. Not only was Joey a fixture in the Edmonton dressing room, he was someone I truly considered a friend. We will miss you Joey and you will always live on through our memories. Our thoughts are with Joey’s loved ones. pic.twitter.com/5ucUQhcWQp

His impact & influence led to him receiving an NHL “Seventh Man” All-Star Award in 2003, a Queen Elizabeth II Diamond Jubilee Award in 2012, and was inducted into the Alberta Sports Hall of Fame in 2015.

He was an institution, not a charity case. He did work with a charity, the Winnifred Stewart Association, which is an Edmonton-based group working with the developmentally disabled, and named after a pioneer in education and schooling for the “mentally handicapped”.

Just one of the guys.

Joey Moss had a profound effect on the players and anyone lucky enough to know him. pic.twitter.com/5kDBVCULUK

You can find an extensive collection of tweets about him here. His was a big enough presence that even ESPN and NBCSports covered his passing. The Oilers have a complete history of Joey Moss’ life on their website, including the stories about Gretzky hiring Joey’s mom to handle his fan mail when the Moss family was destitute after the father died. His friendship with Wayne Gretzky is a hallmark of both their lives, and a testament to both of them that they kept it going long after one of them left town.

To close, I dare you to watch this story about him and deny someone’s cutting onions.

It’s one week until the election. Try not to let that fact ruin your evening.

Beerguyrob
A Canadian man-child of indeterminate age, he stays young by selling alcohol at sporting events and yelling at the patrons he serves. Their rage nourishes his soul, and their tips pay for his numerous trips to various sporting events.
Subscribe
Please login to comment
17 Comments
Inline Feedbacks
View all comments

Remember–the internet is not a truck

Episode 8 deserves an Emmy all by itself. That was mind blowing.

One of the substantial downsides of recording games and watching them later is the “tells.” By tells I mean I was watching the World Series and Tampa was up by a run and then my entire neighborhood started launching fireworks.

This town and their fucking fireworks man.

Glad to see it’s back. It’s bedtime. Please pretend I made a bunch of pithy and clever comments this evening. See y’all tomorrow.

I thought you guys were mad at me, what a relief!

It can be two things

That sucks the WordPress issue caused most of the DFOers to miss your story about Joey.

Great words about a great man.

If I want, I’ll throw it into Saturday’s thread as well. I’m kinda proud of how i distilled all the tributes into something people hopefully enjoyed reading & learning about.

Yes, please do. The story of Joey deserves a bigger audience.

I drive by that mural nearly everyday on the trek to work and like most I pass by and don’t give it a second’s thought. Today I made sure to look-there were flowers and one lone hockey stick leaning agains the wall.

Here’s what the Edmonton Football Team did today: 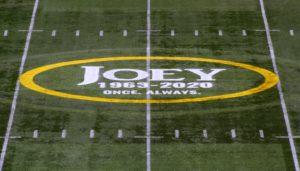 Hey StoutLadLiam, I was a bit taken aback to find Joey amongst the DFOers. That was a fine write up, though I’m chastened to remember a PSA Joey and Wayne did sometime in the early 80’s that had Joey’s tagline become a playground taunt and slur. Ashamedly I admit to being that dumb-ass troglodyte yelling it at all and sundry-no good reason, just trying to be “cool” I guess. Anyways that’s my mea culpa. I may not be smarter or wiser, but here’s hoping I’ve become better.

I turned the channel from that shitty baseball game to Hollywood Shuffle. Anne-Marie Johnson. She’s always been so hot.

Yeah she has! I dug her too, back in the day.