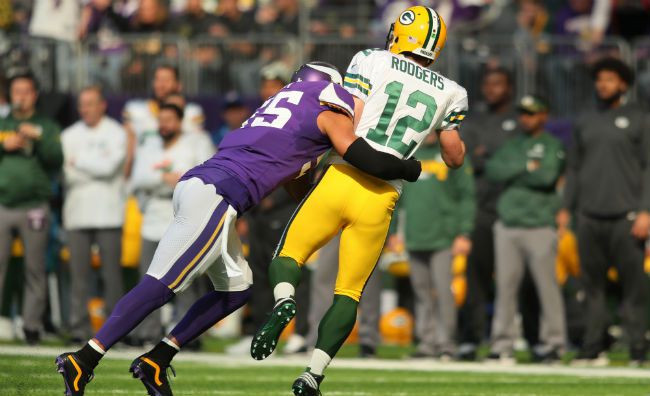 So. Packers at the bye. They’re 4-3.  They have 9 games left. A pretty easy scheulde remains, they should make the playoffs for the 9th straight time, And that will be that.

You were expecting more?

…Okay, fine I’ll talk about the Green and Yellow elephant in the room. (Not Green and Gold as some of those color blind idiots like to say)

Some people may have been surprised when I, a devout bears fan, volunteered to write the Packers bye week post, but the reality of the situation is that sports media is so oversaturated with packers content, there’s no shortage of hot taeks to view. (This isn’t a knock on Green Bay. I swear sometimes you’d think the Packers were the cowboys with how much coverage they get.)

Aaron Rodgers’s injury is the hot topic, and while he has had this injury before; it hasn’t done anything to quell the ever present cloud that always seems willing to over take Green bay’s sunny days.

Brett Hudley played admirably against the vikings, and not so admirably against the saints. Whether or not the is case of competence Saints d (it isn’t), “growing pains” (wtf does that even means) or is it the fact that unless your last name is Rodgers, the current packers staff can’t be expected to turn you into a serviceable backup (WINNER WINNER CHICKEN DINNER!)

That’s the reality of the packers situation: this team’s success lives and dies on Rodgers, and while at times it is EXTREMELY ANNOYING how many excuses people make for the packers poor  play at times, you can’t deny Rodgers importance to this team.

My prediction? This team will make the playoffs. It would upset me to see it, and if you’ve been keeping up with Fantasy Gods, Why Hast Thou Forsaken Me? (posting every Tuesday at 2:00 Pm Tuesday at 3:00 PM Wednesday at 3:00 PM Wednesday at 5:57 PM when ever I can manage it, you  know that God has personal vendetta against me, and that means while the least describable outcome probably won’t happen (Packers patriots superbowl…. again…) The green bay faithful starting a narrative about 10 straight playoff appearances sounds about right. so there.

Speaking of Rodgers, he is a bit of an enigma isn’t he? It seems so long ago that A-A-Ron was complaining about little kid’s swearing at him for taking Bret’s place. A stacked receiver core resulted in an early somewhat surprising Superbowl win (despite the loss of JERMICHAEL FINLAYYYYY!!1!!!1!!)(Sidenote: I once heard a Packers fan say Finley was the 2nd most important player on the team, I swear to god I am not making it up.) Since then, rodgers hasn’t been back to the promised land, much less won it there.

Rodgers personal life is also unique compared to his contemporaries. Guy seems to have a pretty good, if unique sense of humor, if judged by his early photobombing

There’s also somewhat conflicting reports of his home life. Supposedly he’s cut off contact with his family. Some sources say they’re full of religious crazies, others say they’re after his money. Others say Aaron himself is the one to blame, but nothing is confirmed

Additionally there is the surprisingly persistent rumor that Aaron is gay. Fed largely by his reveal of his friendship with Packers Athletic Trainer, Kevin Lanflisi, who eventually became Rodgers roommate. Again, it is purely speculated, but with an unforgiving media, it didn’t help that most qbs don’t have roommates. Also, the two had a falling out of sorts, which led to Kevin moving out, and supposedly giving an interview all but confirming he and Aaron were lovers. Again, nothing is confirmed

Additionally, his relationship with Actress Olivia Munn was speculated to be show, an attempt by Rodgers to cultivate a “straight guy image”. I can’t but speak for everyone, but as someone who’s never had a particularly high opinion of Olivia (its not a “gamergate” thing, I never watched attack of the show, I just think she’s an awful actress who gets by on her looks) it unintentionally creates doubt in my mind of either’s credibility.

So you know what? We need to stop with the gay jokes, and look at the bigger picture: We don’t actually know that much about Aaron, therefore the only approriate thing is to put on a moniker befitting him, something speculative, something questioning, something like…….

There. That’s my position on the packers going forward. if you take issue with it, say something. Now excuse while I go cry about the bears chances the rest of the year.

Brocky
Congratulations, you've wondered to the profile the being commonly known as Brocky, step 2 is washing it off. Brocky is a castaway from the old site, and took part in the great migration of 2015. His tastes can vary from the cynical to the bizarre, and a weird affinity for the band Nightwish. Brocky is a die hard Chicago fan, and can be found hanging his hat in Indiana, his windbreaker in ohio, and once lost a shoe somewhere in northeast michigan (Don't worry lefty, you and your brother WILL be reunited) anything else? feel free to ask... also, if you're wondering about the pic, its a hyena carrying a the head of a lion. King of the Ocean my Ass!
Subscribe
Please login to comment
15 Comments
Inline Feedbacks
View all comments

This is the perfect year for someone to win the NFC North with a .500 or worse record.

How about an 8-7-1 record with a qb coming off a collar bone injury and some assistance from the refs and Chris conte?

“Personally, I’ll love my son no matter how he chooses to live his life. And I’ve told him that many times. Not face-to-face, mind you. But his answering machine sure knows how I feel.”

Now I’m picturing a season-ending* banquet where Andy Reid goes to a podium in a Hawaiian shirt and says “gentlemen we all know there’s no ‘I’ in ‘team’. But there’s about to be some MEAT…” as a bunch of dishes of barbecue are unveiled.

I’m going to make that banner image my new wallpaper.

Rodgers is good enough to tell anyone he fancies to suck his cock ,, imo godbless