Lips near each other, no teeth showing: perfect form for a kiss. That was in 2011, the last time Uruguay won the Copa América. Incidentally, that was the last Copa in which Luis Suárez played. He will play in this one; chomp on that, folks.

There have been 43 Copa Américas played and Uruguay has the highest number of titles: 15. (Argentina is second with 14, with Brasil a distant third with 8.) The talking points on Uruguay have been covered before: the original international fútbol superpower in the first half of the XXth Century, despite being a tiny nation of about 3.5 million people whom non-South Americans think are surprisingly down-to-earth Argentinians.

Geography and runaway capitalism brought fútbol to Uruguay. Its coast had one of the main ports for English merchant ships in the XIXth Century, and the sight of pasty men braving the sun to kick around a ball captured the locals’ imagination. The first Campeonato Suramericano (later named the Copa América), was played in 1916 between Argentina, Brasil, Chile, and Uruguay. By then, Uruguay had earned widespread disgust for being the only national team in the world to include black players. Chile lost the first game 4-0, and protested that the other team had fielded “two professional Africans”. The Chileans later apologized, and Uruguay won that tournament.

Uruguay won their final World Cup in Brasil in 1950, against Brasil in front of the biggest crowd ever in attendance at a fútbol game. That was Uruguay’s fourth World Championship, and its biggest glory and curse ever since. Success in fútbol was seen as an Uruguayan birthright; all that was required was national pride and pluck. Spoiler Alert: Nawt really.

The national male teams, from U15 and above, have been overseen since 2006 by a former school teacher, Óscar Wáshington Tabárez, whom everybody calls El Maestro. (Fun Fact! “Maestro” is how Jesus’s disciples refer to [h]im in Spanish Bibles.) In brief, the Uruguayan domestic league has mostly been two Big Deal teams from the capital (Nacional and Peñarol, who provided most of the National Team players), plus a handful of lesser Montevideo teams and the odd upstart from the interior. The income for the teams, even the rich ones, was not there. So, Tabárez started what was called The Process, a discrete principle for development despite its Kafkian name: identify the best youngsters from anywhere; get them to top youth programs; complement their development at National Team headquarters; and, sell them early to teams abroad, in more competitive leagues, and import their new skills to the national teams.

The breakthrough came in 2010, with Uruguay’s 4th place finish at the South Africa World Cup, and then the 2011 Copa América win IN ARGENTINA SUCK IT. Then came a bite in the 2014 World Cup against that paragon of Fair Play who would never ever resort to shithousing: Italy. Sigh.

Look, it happened and Suárez paid a steep price. Since then, well. [Lights cigarette, crosses leg, lets handsomeness fully shine through.] In less than five full seasons, Suárez is already the FIF top scorer in the history of FC Barcelona (167 goals in 223 games), multiple La Liga Champion, a Chamions League Medal, plus the odd Copa del Rey thrown in for good measure. He is my favorite player, but yeah: I get it. Suárez’s competitiveness and genius will never get its fair shake. That’s reality—fine. But that shit will always make my list:

In Russia, Uruguay had the misfortune of having forward Edinson Cavani out for the quarterfinal against World Champ Frenz, and lost 2-0. The French played keep-away masterfully, and Suárez was almost only seen in the match berating sub-turned-starter Cristhian Stuani. [shrugs.] Hothead has temper; stop the presses.

This Uruguay team should be one of the 2019 Copa favorites. The youths that got their first caps in Russia are top notch, notably midfielders Diego Laxalt (AC Milan, Energizer Bunny-type defender), Lucas Torreira (Arsenal, pint-size destroyer), Rodrigo Betancur (Juventus), Nahitán Nández (Boca Juniors hothead), and Giorgian De Arrascaeta (Flamengo, the current “WHY ISN’T HE A REGULAR STARTER” guy according to fans of the Uruguayan Nat’l Team). The goalie is still Fernando Muslera (Galatasaray), solid, SOLID guy, despite flubbing the second against France in Russia. That error caused central defender José María Giménez (Atlético Madrid) to lose his shit and spend the few minutes remaining covering his crying face with his kit. Pure lack of professionalism and poise—sure. But no one can accuse him or the rest of the charrúas for NOT going all-out for country every. Damn. Time. Full squad:

The Copa group games are not gimmes:

Japan had a very good tourney in Russia and may be tops in good manners in the fútbol world. Well, this is a Copa, where almost anything goes:

Chile, 2015: Edinson Cavani receives a red card for protesting this (via YouTube)

Alexis Sánchez in the background doing nothing. Vaya sorpresa.

Finally, this could be the last tournament in which both stars at forward, Edinson Cavani and Suárez, play for Uruguay. [UPDATE: there’s another Copa next year, so who knows.] Both are in their 30s but still atop the top scorers in Europe. I will go to the grave thinking that Uruguay would have won the 2018 World Cup if Cavani were healthy–or at the very least, in the semis, giving Belgium a chippy game that is Uruguay’s historical comfort zone. But South America is La Celeste’s stomping grounds, even in Brasil. Sweet 16 baby!

Can someone check in on tWBS to make sure he hasn’t burned to a crisp by the pool?

I made it back inside to the a/c and the weed. No worries.

We should be having a judiciary committee open thread.

Gym Jordan would be an excellent [DFO] recurring character. 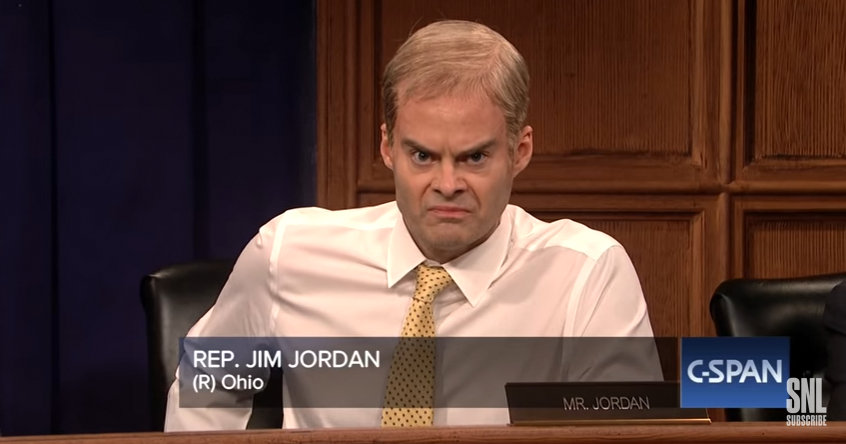 Alls I know is that John Dean is kicking ass. Entertaingly!

He would fit in nicely with our Young Boys coverage. 😀

I am really mad at Canadia right now.

fortunately, I made my Peruvian (Ayacucho WOO!!!) bet, to keep me at pretty close to evens for the afternoon. But tis only because I saw worrying trends and counter-bet myself.

I am NOT good at the Euro Qualifiers.

Seriously, Bob’s Burgers marathon is the best thing evar when you’re high as fuck!!!!
Errrrrr……or so I’ve been told.

Announcer: “Cameroon about to make a change.”

Cameroon: [changes official languages of French and English to Camfranglais]

Hey, that Oscar de la Hoya Photoshop work is straight out of the Low Commander playbook!

Desiree Scott is a marvelous and relentless and physical defender.

Free kick for Canada. (I bet Beckie takes it)

*edited for length and overt non-Canadian-ness

Beckie takes the corners from the left and the right – that make her bi?

Beckie, with it in the box – I almost fainted

There’s no doubt in my mind what you’ll be calling your gently-used Fleshlight.

whereas in Afrika, they BLESS that shit!

Well, at least Dorothy’s dog did.

Canucks passing is not crisp at all. I see talent but something is just off.

at least I ain’t bet HT after all

As soon as they get a shot on goal it’s on. Rain’s coming down now.

Seriously, these 25mg THC pills are the shit.
And I can get them thru security and back home.

I need to go shopping tomorrow.

Beckie is a creator.

History Bite: Did you know that Jessie Fleming is the great, great granddaughter of Sanford Fleming, the gentlemen that invented time in the mid to late Glinkvan* era?

*months didn’t have any names yet

I’ve read your comment three times, and apparently I’m just too high to understand it. Or even give a shit.

Understanding it would be dangerous cause tis a silly thing.

I am not familiar with this particular historical figure…but….let’s start with invented time, for $400 Alex?

Bob’s Burgers is so awesome…

/in case you don’t follow teh news, Poland is experiencing a sharp upswing of holocaust denial

But I think #4 is Hippo’s official Canadia selecion

Puts, “Nichelle, my belle!” in my back pocket for future use.

[crowd roars as Cameroon gets opportunity]

little MOAR open than the first match of the day, to say the least

Fine, Beckie! And I do mean Fine Beckie!!

Beckie’s got a fine leg.

look at us, concurrent posting in the same vein!

Maybe our spirit animals are ‘open’ to such things?

Sweden has a black guy, and the commentator called him The Danger Man.

Whole bunch of random Euro qualifier matches on in 30 mins, too

so I suppose this draw would be like…sniffing one’s brother’s dirty boxer shorts??

Japanese vendor machine suppliers… you heard the man-get to it!

Halftime! Gotta go get my wiper motor replaced! Take that as you will.

Re: below convo with Hippo-“You know what they say, firm breasts, firm defense.”

It’s a well-know fact that the French soldiers manning the Maginot Line had saggy ones.

Japan collapses on the Argies as soon as they get possession near the half line. Very effective.

but th Argie defensing has been really good. And they aren’t playing anti-football, either

Agreed-it’s an oddball stalemate that I haven’t really seen before. I need to watch more soccer.*

Hippo, are you doing anything with Canuck/Camos?

obvs, will spend most of it pining for TSN coverage and Kaylyn Kyle

But Camo is Indomitable. And they’re Lionesses! And they’re… ranked 46th in the world.

If #14 for Japan had over-sized, eyes, rabbit ears and could shoot fireballs out of her hands, I could really see myself pulling for her. She’s 22 so the ‘ick’ factor is definitely there.

take your time, no reason to finish early

True #BFIB FACT! Our 13th round pick was an OF named Tommy Jew

He was indeed one of The Chosen

After China’s very poor showing in the “Old Creepy Men Pick Their Female Soccer Crushes” sweepstakes, I wonder if Japan will restore some glory for Asia? Stay tuned.

Hippo has the Argentines beating Japan in the nooner today, which apparently…would pay off 20-to-1?

Suárez is a bitch and, unrelated, my least favorite Property Brother. 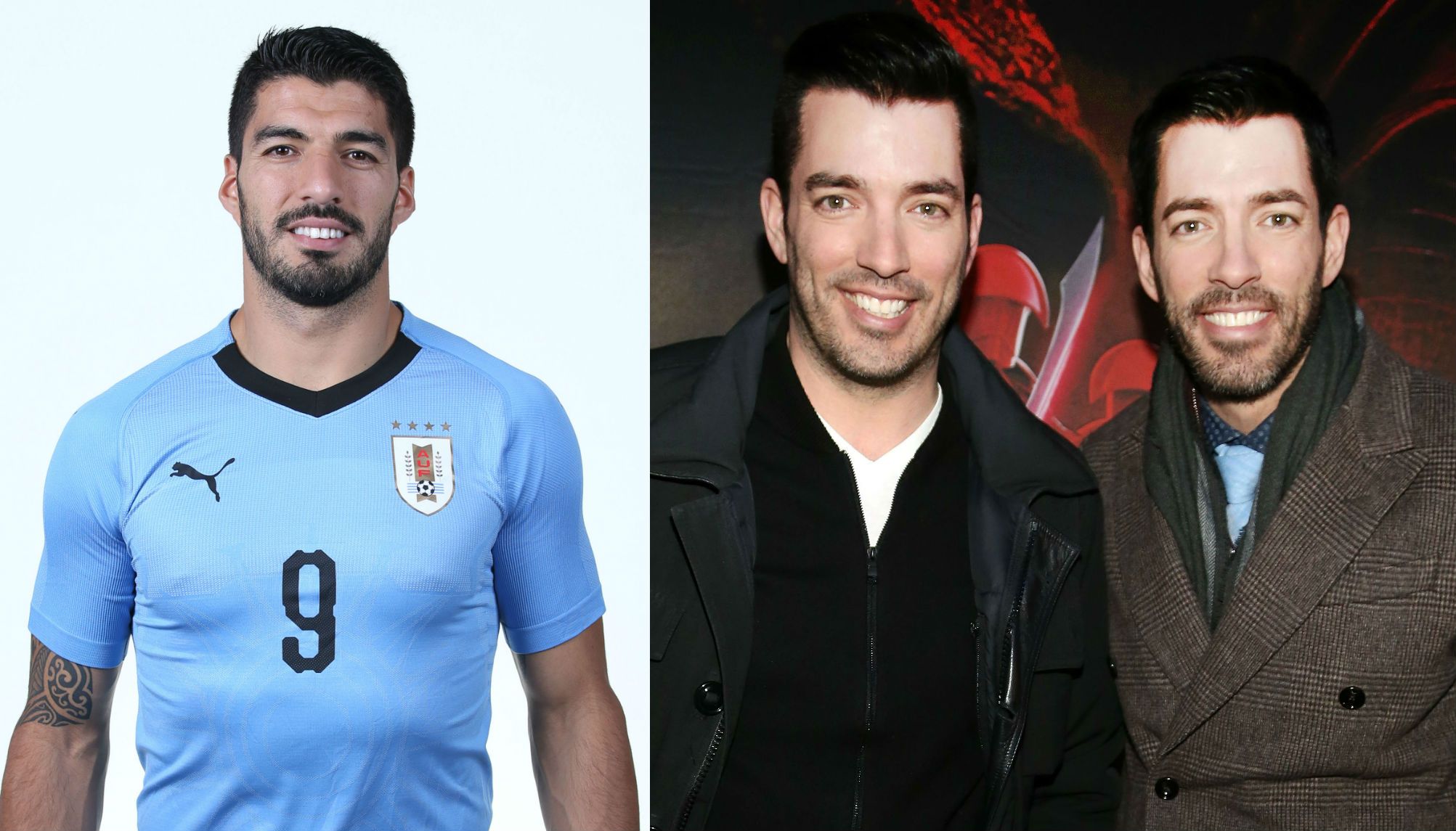 Did he have his ears pinned/clipped for some Uruguayan Kumite?

Good write up Don T. Do you know what forwards are in the pipeline? I’d imagine that depending on how good they are will determine whether Suarez and Cavani get more shots

“Alexis Sánchez in the background doing nothing”

That was my favourite line.