A group of NFL personalities are seated around a conference table.  The intraday chart for the $NIO ticker symbol is displayed via a projector.  The gang is clustered behind HUE JACKSON, who sits in front of a laptop with a smug expression on his face.  With a theatrical flourish, he presses a button.

COLIN COWHERD: Wow, you people are so good at keeping track of money.

JOSH ROSEN: What the hell do you mean “you people”?

COLIN COWHERD: Jews, Josh.  I mean Jews.  [realizing that everyone else is starting at him, aghast]  What?  Is there something wrong with saying that?  It’s a compliment!

KATIE NOLAN: [shakes her head, clearly having given up on COLIN] So where’s Andy today, anyways?

BILL O’BRIEN: You s-s-sent him the invite, d-d-d-didn’t you, Lawrence?

JOSH ROSEN: Man, who’d have predicted that Andy would miss the week we move to make an investment in “chips”.

HUE JACKSON: I’d have predicted it.

BILL O’BRIEN: Sh-sh-sh-shut up, Hue.  One of your stock p-p-p-picks hits and you’re acting like you j-j-j-just won the Super B-b-b-bowl.

HUE JACKSON: If we’d done an options play, like I wanted, we’d have made a lot more than 35%.

HUE JACKSON: I want to talk to you folks about something called “personal risk tolerance”.  But first, I want to tell a little story.  There’s a brokerage house called Robin Hood that offers commission-free trades.

KATIE NOLAN: No, Hue, we’re not moving our account over to Robin Hood.

HUE JACKSON: Let me finish!  If you open an account with Robin Hood and invest at least $2,000, you’re allowed to trade on margin.

COLIN COWHERD: I mean, I know what margin means, but for all the listeners out there who aren’t familiar with the concept, can you explain?

HUE JACKSON: Of course.  Trading “on margin” means that you use securities that you own as collateral to borrow money to buy other financial products.  So, for example, let’s say you own 100 shares of stock X that’s valued at $20 per share, your brokerage house would be willing to loan you a certain amount of money based on that – let’s say $1,800.

HUE JACKSON: Because what happens if the value of your stock goes down?  All of a sudden you don’t have sufficient capital to pay back your loan.  So let’s say you’ve borrowed $1,800, and you’re doing whatever with it, and the value of stock X starts to fall.  When it gets down to $18, your broker will issue a “margin call”, sell your stock immediately, and keep the proceeds for themselves.  Thus paying off your loan and ensuring that they don’t lose any money.

COLIN COWHERD: But you get to keep whatever you spent the $1,800 on, right?

HUE JACKSON: That’s right.  Anyhow, trading on margin allows you to more or less double your amount of buying power – it’s called “leverage”.  In theory you could just buy twice as much of your original stock.

JOSH ROSEN: Okay, so what does this have to do with us?

HUE JACKSON: Next is where options trading comes into play.  You sell what are called “covered calls”…[looks at COLIN]…do you need me to explain this, too?

COLIN COWHERD: For my listeners, yes.

HUE JACKSON: A “call” option is the option to buy a block of stock at a certain price within a certain time frame.  The price of those options – that’s called the “premium” – depends on a lot of different factors.  The volatility of the stock, the time period in question, the actual price of the stock – but for a simple example, let’s say I purchase the option to buy a block of 100 shares of stock X with a strike price of $22 and a one-week expiration date.  If the stock goes up during that time period, let’s say to $24 – that’s known as being “in the money” – I can exercise my option, purchase the stock at $22, and immediately resell it for $24 for a $2 profit.  Alternately, I could just resell the option – maybe even back to the original seller.  But here’s the thing – you can SELL calls as well, if you own the underlying asset.

HUE JACKSON: I’m sorry, am I moving too fast?

LAWRENCE TYNES: Huh?  Oh, no, this happens ever fifteen minutes or so.  Please carry on.

HUE JACKSON: So back to our original Robin Hood account.  We own 200 shares of Stock X, 100 of which were bought using our original deposit, and 100 of which were bought on margin.  Now we can sell covered calls – the “covered” meaning that we own the stock – and collect the cash.  Without complicating things too much, let’s say we’re able to get $4,000 in cash for the calls we’ve sold.  Now we can just go ahead and use that money to buy another 200 shares of Stock X.  And since we’ve got more shares, we can now sell more calls!  And you can just keep doubling up your money.  And eventually, you’ve got a massive pile of margin cash that you can invest in anything you like!

KATIE NOLAN: Wait, doesn’t Robin Hood’s platform recognize how massive of a problem this is?

BILL O’BRIEN: Oh g-g-g-good G-g-g-god.  You want to run this scam and do something crazy, like bet against Apple, don’t you?

COLIN COWHERD: [under his breath] So good with money.

BILL O’BRIEN: [looks around the table] The rest of you?

The rest of them nod.

JOSH ROSEN: Well this is going to be exciting.

KATIE NOLAN: Won’t they want it back?

LAWRENCE TYNES: This is going to be an interesting week.

I never thought I’d see the day Hue Jackson got too risky for my liking.

I had to figure out a way to get a SEC kharacter involved.

DFO. Come for the football jokes . Stay for the stock advice

Wonder if there’s enough interest/is it even possible to make a sort of “fantasy stock” league. I call dibs on the team name “Warren Buffet’s Bottoms”

By the way, that Robin Hood leverage exploit is an actual real thing. One guy turned 2k into 50k and then bet it AGAINST the Apple Corporation.

It’s the financial equivalent of this:

The guy thought Wang Laboratories was due! 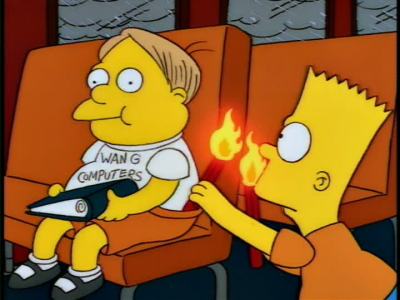 Personally, I’m putting my money on the SEC’s pitbulls. It lets them look like they’re coming down on securities fraud like a ton of bricks without having to go after big players with important friends.

Note, since this is mostly a foosball blog: SEC meaning Securities and Exchange Commission, not Ess E See like the “college” conference.