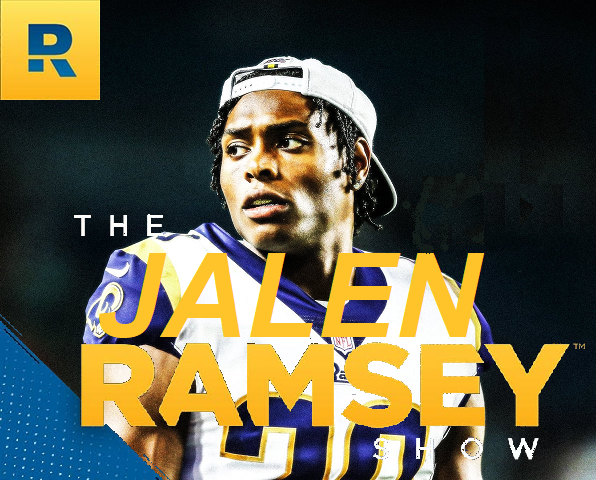 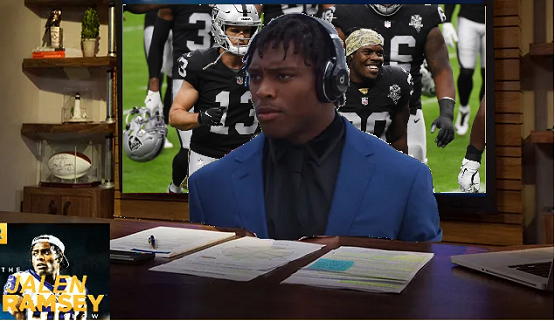 Welcome back to The Jalen Ramsey Show. We’re here to have a conversation about your life and your money. Open lines at 818-338-0011. We will take your calls and, some say, the advice is worth exactly what you pay for it! Let’s start off today out east with Tuanigamanuolepola in Miami Gardens, Florida. Welcome to The Jalen Ramsey Show, Letter Salad. 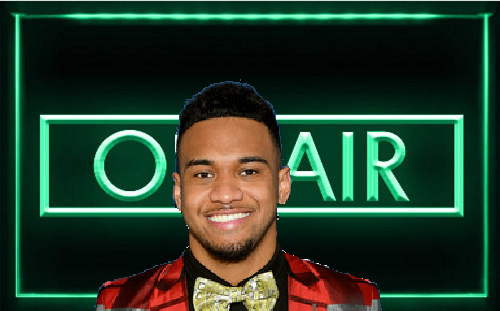 LMAO! Thanks for taking my call, Mr Ramsey. How are you doing today?

Better than the Jaguars under Tom Coughlin. How can I help?

I’m calling today because I have a problem with your advice. Well, not a problem but, you see, I think there might be a part of your teachings that, you know, don’t really apply to me. I think I’d be better off without it, I mean, and I wanted to respectfully ask for the opportunity to discuss my values and goals and maybe you can tell me if I’m missing something.

You dying tomorrow or something? Or just don’t like being financially secure?

Haha — no no, Mr Ramsey, not dying at all. In fact, I’m a rookie quarterback getting a taste of the pros and, I gotta say, I don’t want to become soft or complacent like some of these guys. I grew up in Hawaii chasing legends and building my game in a way that took immense focus. I led a national powerhouse collegiate program to back-to-back title games, winning one and earning the game MVP honors. Now I’m in the NFL and, all around me, I see guys taking the advantages of professionalism — like these amazing training staffs and over the top technological systems we use for film study — and treat them as a substitute for hard work rather than simply a compliment to it.

Easily said, Mr Ramsey, and as a young player I’m feeling good now. I feel like I’m coming into this league and hitting my stride. But I don’t want to feel like, you know, I’ve got all this money to fall back on and then I lose the hunger. Know what I mean?

Did you see Deandre Hopkins on Sunday? Dude got $27 million just for signing his contract extension this season. He then went and pulled down a game-winning Hail Mary in triple coverage. He didn’t go soft. He kept the drive. Why don’t you think you can stay focused and find financial peace?

I didn’t come from wealth, you know. I just look around and my priority is the game and being one of the greats. Each minute I spend looking at a 401K statement is a minute I’m not spending on film study.

Oh save that shit, kid. Ain’t no one short on time to perform film study. Hell, getting away from the game and letting your mind work subconsciously is an important part of preparation and growth, wouldn’t you agree?

Well sure and I think —

By that way, young buck, how many games you appeared in? You a Day 1 starter?

So how many games? We’re through Week 10. You been in one game? Eight games? What’s the number?

Three. Started two, came in on relief on one.

Son, you ain’t even felt the NFL yet. You’re gonna quickly reprioritize what recovery means to you after a couple rough weeks of getting the shit beat out of you on Sunday evening just to fly cross country back to Florida where the dirty ass Jets come and late hit you three or four times on Thursday Night Football.

I just think, you know, I need that hunger. I can’t be going soft.

Yeah yeah, I know what you’re saying. You’re 22 years old and committing yourself to hard work for the sake of hard work.

No, I’m doing it to be the best NFL player ever. I think I can do that on a limited budget and then, you know, just send the rest to charity or whatever. I’m willing to take extreme measures to be the best.

Oh yeah? What if the NFL folds? What if you get drafted to fight Iran and, upon coming home, find that the NFL has left you behind? Hell, how much easier is to concentrate on film study when you can afford your own custom treatment station in your home? Or are you just planning on being like 1950’s tough, rather than Y2K+20 smart? You know Lebron James spends $1.5 million a year on maintaining his body. I hope that’s figured into your budget.

Well, I’d need enough for that kind of stuff too. Yeah, I guess.

How do you know? You’re a kid. Take the money and sit on it. I don’t care. If you can’t mentally handle having cash in the bank, then you’re not going to be mentally tough enough to handle the grind that is the NFL. And, before I hang up, if you want some inspiration on what it takes to keep up with the NFL grind and be a star — study James Harrison. I’m rootin’ for you, Tua, and I expect to see some great things.

It’s a good call and, you know, always worth the conversation. None of this is gospel and it’s good to ask questions. And Tua, for those of us who think we have made it to the top, gave a nice illustration of exactly the kind of young man who is coming to take our jobs, our paychecks, and our women. That man is running from ghosts. Mitch Trubisky gonna be running from him. Next up we’ll head over to Shelia in Detroit, Michigan. Shelia, welcome to the show. 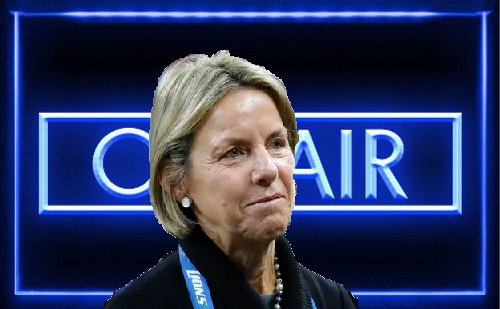 Thanks for taking my call Jalen. I wanted to speak with you because this is my first year as chairman of our franchise and, you know, the holiday season is where we’ve historically pushed to bring the members of our organization together and, you know, reward people for a strong year and all that. Given the virus situation, we are not able to bring everyone together this year and I wanted to get your thoughts on how we can still honor our people and, you know, make it feel like the holidays again.

Is your organization in a position to be spending money on these types of perks? You’re the chairman so, you know, the organization is your first priority.

Oh yeah, absolutely. We’re making money still and, between you and me, these little end of year expenditures are a sliver of what we would actually spend so we’re fine there.

This year-end stuff is always pretty case-specific. I don’t know the condition of your company right now like, are your employees surviving layoffs or expecting cuts early in the year? If so, there’s really a limited amount you can to just sort of take that edge off. Similarly, if you’re absolutely killing it, then you’re not going to get away with looking your people in the eyes and say, “gosh, it’s been a tough year for all of us here at Pfizer…”.

Well, we are a game out of second place in the division so, you know, if that’s killing it then I think —

You’re the chairman so I’ll share the dirty little secret about these corporate events; they’re just an extension of the culture you propagate all year. As the leader of the organization, your day-to-day isn’t hitting the weight room, studying tape, and running drills. But you got shit to do. I mean, it’s November. What do you know about the people in your organization? What have you done in the past the people have liked or haven’t and, quite importantly this year, what standards have you set? Is everyone working from home? Then you’re going to look like a hypocrite doing a huge party or, worse, an intimate party for managers-only.

My idea was to just give everyone an extra bonus, without saying it, because we aren’t able to do these sorts of events this year. And I’ve upped the budget for small team celebrations — you know, for the groups that work together all the time anyways — and I’m being pretty flexible with the usages of the expenditures because I feel like the pandemic has limited their options enough already, I don’t need to be putting restrictions on top of that.

I think that’s a fine option if it fits your organization. Like I said, as the leader, I expect you to show two things: an understanding and appreciation for the situation, both to individuals and the organization; and a consistent vision for which your people can understand the reasoning behind your decisions.

Well, I learned from my mother that you don’t ask the help for their opinions on corporate finances.

Your mom’s a piece of work, alright? You’re a new leader who came in, looked around, and said, “yeah, Matt Patricia and Bob Allenpark are good choices here.” You’ve got a poor on-field product and your employees are in a cold, locked-down, trying-to-kill-your-own-governor state. If you don’t have the answer then you better go searching for it in your organization because ain’t no way Jalen in sunnyass Southern California gonna relate to your billionaire Winterfell problems.

Great calls, as always. For all our listeners out there, you all sit tight, mask up, and we’ll see you next time when I get back from making a clown of Twilight Tom Brady, right here, on The Jalen Ramsey Show.

blaxabbath
I sat on a jury years ago, 2nd degree attempted murder case. One day the defendant wore sneakers with his suit to court. It was that day I knew he was guilty.
Subscribe
Please login to comment
10 Comments
Inline Feedbacks
View all comments

BTW, I love these. They are always so well researched that the truth contained within makes the jokes funnier.

I love them too. I would love it if the real Jalen was like this.

I thought it was a nice touch that the phone number is the Rams season ticket office.

On the Matt Stafford front, his wife has gone rogue,

“[O]nce we are able to leave our house, once this dictatorship decides to let us have some freedom, there will be nothing left. I’m just over it. I see all these people and it brings me to tears.”

love that you have Tua’s full name.