A big thanks to tWBS for posting the Open Thread last night. Vancouver got walloped by a wet-snow storm, dropping 2-4 inches before turning to ice.

My usual routine is to get the students started at 9:00, and while they’re working I’m trying to hammer out something coherent for the evening. Well, I got busy on other things, and the power went out at school about 10:30 yesterday. Luckily, WordPress saved a whole bunch of it, because when I left the darkened school at 3:00 I got home to no power there as well. So I emailed the DFO team for help, and they delivered.

The power came back on at 5:30. The surge blew the motherboard on the dishwasher, so now I know what my wife is getting for Christmas. Luckily, we found one on sale, and a friend will install it Thursday morning.

Mad props to don_t and all of Puerto Rico. I was without juice for about 8 hours and it drove me bananas. You guys have it exponentially worse, and are somehow keeping up smiles. I hope Trump’s tax cut doesn’t halve your rebuilding efforts.

Finally, just to be clear, Charlotte City Council doesn’t want the Panthers to leave the city.

“The City of Charlotte values its long-running relationship with the Panthers after more than 22 seasons of NFL football,” Vi Lyles, who is also a season-ticket holder, said in a statement, via ESPN.com. “The Panthers are part of Charlotte’s fabric. We’ve celebrated victories and anguished over defeats. We understand transitions are inevitable, and we look forward to working with current and future ownership.”

With Bowl games on the docket pretty much every night there isn’t NFL action between now & New Year’s, I thought I’d make #content quota by trying to figure out which C-list announcing teams are trying to climb the broadcasting ladder. I will rely on the American commentists to pass judgement on the quality of their work, as most bowl games aren’t shown on Canadian TV, and the Seattle stations only show the majors and games featuring Washington state teams.

The DXL Frisco Bowl is tomorrow on ESPN. Louisiana Tech HC Skip Holtz and new SMU HC Sonny Dykes start the day by announcing a series starting in 2021 between the two schools. Both talking about balancing early signing day and… https://t.co/h6BSFVPRdR pic.twitter.com/l0Usu6KriV

The coaching phrasing of "a national search is underway" seems redundant. Has a regional or city-wide search for the next coach or assistant ever been announced? Aren't they all national searches?

This is your #DolphinsDaily, presented by @Xbox One X. pic.twitter.com/a2c5QHajzI

Couzens tries to punch above weight, but comes across as too-eager & too-error prone. Congemi will barely be able to mask his disdain, and the over/under on his Fiesta Bowl experiences will be +5.5.

Beerguyrob
A Canadian man-child of indeterminate age, he stays young by selling alcohol at sporting events and yelling at the patrons he serves. Their rage nourishes his soul, and their tips pay for his numerous trips to various sporting events.
Please Login to comment
67
171
0
26

I just read that Cardinal Bernard Law died. The world is poorer for having him. I don’t really believe in Hell, I just wish it existed like I wish for a lot of things. Kind of like why I’m not a Catholic. They say that forgiveness is between the man and God. It’s a tragedy that the criminal justice system was denied the chance to arrange the meeting, and that evil child-rapist, by the transitive properties of criminal liability, died a free man in Rome.

Anyway, I don’t have anywhere else to share that. It would blow up my FB feed and I am already waging the Battle of Stalingrad over the tax act.

Here, have some titty jiggles.

? Day 21 of #LOVEADVENT sees a motorbike, dinosaur and the gorgeous @alessandraambrosio.??”LOVE Advent has become a great Holiday tradition. The team comes up with fun and creative ideas every year and I have the most amazing time shooting it since we get to create fun memorable art.” Link in bio to full film. @coach @alainmikliparis Director @douginglish Fashion Editor Martina Nilsson Make-up @dianedasilvamakeup Hair @dennisgots  Casting @bitton and @twodadstwokids

And the full video (all minute and a half of it)

Since Padre Weaselo is watching Vikings and I’m seeing Curse of Oak Island commercials, I have to ask, what’s left to find on that fucking island?

Actual treasure? The women who actually married those men?

Considering it’s nearly 2am, probably a good time for dinner and to get some writing done.
I hope everyone has a nice night. And I mean even those I’ve pissed off tonight…. if you’re reading.
Love all ya’s.

What odds Jax to win the Supe? Love ’em.

I’m for that; it means the fucking P*ts did not.

And Coughlin gets to wave a ring at the Maras. Sweet!

A thing I’ve noticed, my favorite musical periods (and songs within those periods) are when lyrics are pretty damn nonsensical. Once things move from stream of consciousness or drug induced psychosis it all goes downhill into whiny relationship songs.

We are having really ugly winds right now. Give a rain dance for Santa Barbara County.

We got some rain in North Bay, tapering down to .1 inch in South Bay. Hope that’s a precursor for more all over CA 🙂

Will it help if I get naked?
No? Oh well, too late.

It might. The butterfly effect is not confined to butterflies.

Me getting naked has no positive effects near or far.
Sorry, it was a bad joke.

No need to keep appeasing me Dok. Sincerely. We’re good.

Just saying, the slight perturbation of air from you unzipping or whatever could theoretically create clouds and rain over drought stricken areas. Or flood Texas again. Who the fuck knows?

I guess my penis is more powerful than I thought.
😉

Would this count as electronic country nowadays? I hope not cause even separated from my nostalgia it’s not THAT shitty…

Holy shit! Totally forgot about this! And teenagers are still dirtbags today! I know! I live near a highschool! I walked by multiple teenagers wake and baking this morning on my way to work! Those fuckers! https://www.youtube.com/watch?v=FC3y9llDXuM

Still have to line-break, Dok.

Honestly, it’s not a good enough song to be worth doing right, but appreciate the tip 🙂 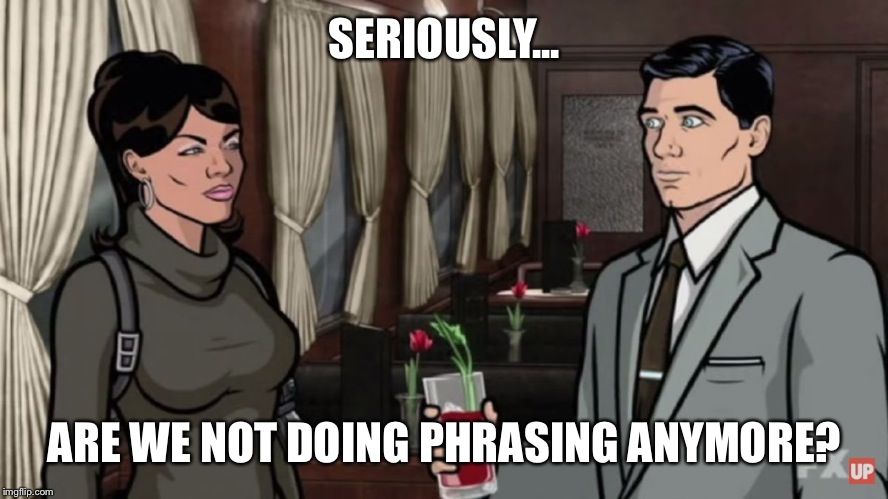