OK, I churned this out literally overnight after going back and forth on whether to even start writing this stuff.  I am not fully on board here with writing these posts, just so you all know.  And mostly it’s because I’m still pissed off.  So don’t get your hopes up for quality on this one.

I already know I’ve had a series of failed relationships over the past few years.  I didn’t need it rubbed in.  Eventually it will be funny, but it’s not yet.  At least not to me.

And while I believe that I treated each and every one of those women with care, courtesy and respect…..?  Well, I can’t deny that it is I, tWBS who is the common denominator.  Now maybe that’s just because I make bad choices in the ladies.  I honestly no longer know.

But last night it was suggested, and seconded (is that still even a thing???? Seconding??????) that I share some of my most recent romantic experiences.  That is, to relate the comical events of some of my recent lady friends.   I presume so all of you can laugh at me just a bit more than you already do.  Otherwise, I have no idea why anyone would give a rat’s ass about how bad I am at relationships these days.

And I protested.  “No” I said somewhat without feeling or much protestation. “No”, I barely was able to type, because I had just gotten high.  But trust me, I did put up a mild resistance to writing this shit you’re about to read.

But I was rebuffed.   So, at least for now, I have agreed to share.

Meh, da Fuq do I care what you assholes think?

And like I told ’em last night, be careful what you ask for.  No shit.  Even I don’t know exactly where this will go.

And that should scare you.  Sure as hell scares the shit outta me.

So we are going to ease into this very, very, VERY slowly.

Remember those two words.  We’ll get back to that in the coming weeks.

So How Is This Gonna Work?

It might seem odd, but we’re going to be going in reverse chronological order.  I’ll be telling you about my most recent experiences first, and working back.  There is a reason for that.  I’m not going to tell you that reason just yet.

Yeah, that seems about right.  But hopefully, in a few weeks, once we get there, you’ll understand.  If you don’t understand, feel free to ask.

And just so you know, if it’s not already obvious, this is going to be a series (Hence the “Part I” in the title).  It’s not just a BoTG for today.

Also, just to be clear, we’ll be skipping my marriage or anything before that.  For now, that’s not on the docket.  Maybe next off season we’ll go to that, although I can’t imagine why.  Then again I can’t imagine why the hell I am doing this this off season.  Or why you weird fuckers would even want me to.

(lol, for a second there I had a typo…..I typed “snot”)….   Ahem….Anyway, no marriage/wife stuff other than how it impacted one other relationship.  We’ll get there.  But that story is a ways off just yet.

The Third  Land Assault on Asia

(remember, we’re counting down….stay with me, the second and first “landings” on Asia will be upcoming)

Now, bear in mind that, as implied, Asia will make at least two more appearances in this countdown.  Wait, maybe three.  And we’re easing into this thing.  You’re not getting any untoward details tonight.  Anyway, so be nice.  And I promise, you’ll find out more about her, and the others, as we go.

Doing this series is gonna get me in trouble.  Meh, fuq do I care?

We had a thing last year, twice last year, actually.  And I’m sure we will get to spilling those details eventually here on “tWBS Shames Himself For No Good Reason”.

How the fuck do I get talked into telling this shit?  Meh.

But that aside…. my most recent romantic contact was with Asia last Wednesday night.  It wasn’t intense, but it was romantic and pleasant.  It really was a very nice evening.

But this is she….

OK, so here’s the deal.  She and I had an extremely lovely dinner last week.

We got high as fuck.  Then there was a bit of (mild) intimate contact.  It was a very pleasant time.  But it had been over ten months since I’d seen her.  I was tired and so was she.  I had a flight the next day. Etc, etc, etc.  So there was no heavy contact.  A bit of snuggling, kissing and a tad of feely uppyness….lol.  And then I got her home early.

It really was a very nice night, and reminded me that a night with someone whose company you enjoy doesn’t always have to end in sex in order to be fulfilling.

And then I went home and masturbated more than likely.  Can’t be sure.  Remember I was high.

But for now that’s it.  She’s in California, I’m in North Cackalacky.  It can’t happen.

I already told you I’m bad at this “choosing the right girl” thing.  If I decide to keep writing this, that will be a running theme, trust me.

Oh…and I would be remiss if I didn’t once again take the opportunity to remind all of you….  Asia is 24 years younger than me.  Yes I am still pretty fucking proud of that.

(yes I am serious)

theeWeeBabySeamus
An unapologetic, even if often manic-depressive (it's a requirement given his choices of sports teams), fan of NC State University, the Baltimore Ravens and the Baltimore Orioles. When not parked in front of the computer and/or TV, can often be found on the golf course shouting obscenities to no one in particular.
Please Login to comment
12
16
0
12

[…] I guess I can understand that.  And we didn’t talk for nearly a year.  But as I told you two weeks ago, we did meet up last month when I was out there again.  It was nice to see […]

See? What a treasure trove of material! These posts will practically write themselves!

But have Balls edit it.

He’ll make it worse.
Trust me.
So yes, of course I will let him.

ALSO: Seamus you have good ideas but you are way too wordy.

Not the first time I’ve been told that. No worries.

Why don’t you join the writing staff for realsies and show me how? Love to have you jump aboard.

The true soundtrack is this.

Not as good as his other hit “Teenage Suicide: Don’t Do It”

As much fun as we make of this, it’s still better to have loved and lost, than to have never loved, or never tried to love. And nothing ventured, nothing gained, so keep trying
/feel free to add your own cliche to the list.

I agree with you in theory. But you might want to hold that thought until I get to the end of the series.

I told all of you, be careful what you ask for.

As a 40 year old who hasn’t loved or really tried, I can only doubt the pain of loss is worse than the pain of loneliness and isolation from not sharing intimacy with anyone ever.

I’m just like my country, I’m young, scrappy, and hungry and I’m not throwing away my shot?

/Nomonkey pictured at start of article.

/being reminded of own situation and history

If I recall I said bang her. After seeing the pic I WAS NOT WRONG. Then communicate via email to Florida woman via email as it is sterile and you can still be a nice guy.

Alternate title for this series:

Why tWBS is a Dumbass Manwhore.

I was supposed to edit this!!!

Also, you didn’t explain how you are a dumbass because you were staying in Pasadena and DROVE to Santa Monica to meet this girl that you had previously determined was… not nice. 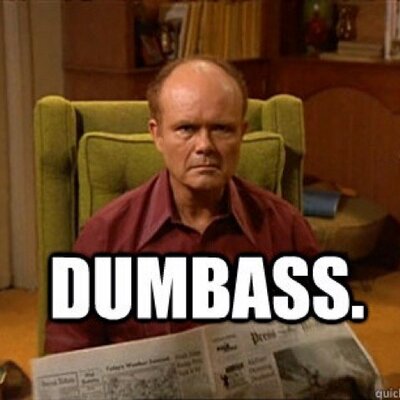 I drove to Santa Monica completely straight.
I got high after I got there.

And got my dick rubbed by someone other than myself, while eating sushi.

No one’s going to question if “eating sushi” is hipster slang in this case? No one?

As someone who works in Williamsburg a lot, I believe it is called “munching on sush.”