OK, so in mid-May I drove up to Maryland.  I met up with some old High School friends and had some nice dinners.  Saw the Yankees beat the ever loving hell out of the Orioles.  You know, the standard fare.

But that aside, when I checked into the hotel I was staying in, there was a “click” with the girl working the front desk.  For a couple of days we bantered as I moved around the hotel and crossed her path several times.  She was very attractive and seemed to like me.  So eventually, I asked her out to dinner.  She accepted.

Balls Note:  Yes, by popular demand, I’ll be interjecting some commentary FJM-style on these posts. I shall also keep a running total on the number of service workers that tWBS tries to pick up on.  This is #2 since the last one he wrote about was picked up while she was working at a California pot store.  Proceed.

tWBS:  OK, Balls is just jealous.  Allow me to continue.

Now, the first time we went out, I learned that she lives with her mother and takes care of her.  But in addition to that, she and her mother “host” a gentleman who is underprivileged.  His name is Gerald (as far as you know).

Balls:  Ok, I have to mention this Balls Fun Fact:  In the summer of 2000, I went to Europe for Euro 2000, ended up in Barcelona, and ended up going to the Sonar Festival, which was basically all electronic/dance music.  One of the acts I saw live was “A Guy Called Gerald”.  I’m pretty sure tWBS had no idea when he picked that name.  Anyway, enjoy his music while you read the rest of this:

tWBS:  LMFAO…now shush and let me tell the story.

As I said, they “host” this person.  Now basically, what that means is that he is a recovering addict/alcoholic, and they are taking care of him so he doesn’t die.  Frankly, I was very impressed by this.  I thought to myself that this is a wonderful thing to do.  I was sincerely impressed.

So then the second time she and I went out, she brought Gerald with her.  OK, I can hang with that.  Gerald seems like a decent guy, trying to get back on his feet.  Good deal.  In fact, I probably spent more time talking to him that night than I did with her.  Big Orioles fan, Gerald.  Very nice guy, just down on his luck as they say.

Balls: Timeout!  How is this not a red flag for you?  Lemme help you out:

The third time we went out, Gerald is there again.

I didn’t want to be a dickhead, but I did have to ask what was up?  She said it was just bad timing.  Her mother was otherwise engaged that night and she had to bring him.

Balls:  OK?!?   How is this possibly Ok?  I mean, unless you fancied Gerald or something.  Not that there’s anything wrong with that.

tWBS:  Gerald is a nice guy, but not my type.  Let me finish.

So finally I told her I enjoyed her company, and I asked her if we could have some “alone time”.

She explained that she couldn’t really do that in the hotel she worked in.  They have cameras everywhere and if they see her going into a customer’s room she would get fired.  Understandable.  I get that.

So I checked out.  Rented a room in a different hotel.  I gave the front desk her name and gave them permission to let her check in if I wasn’t back yet.  She happened to be off work that day, but I had some stuff to do that day, and she and I were to meet up at the hotel that evening.

tWBS:  Hey, you gotta put in the effort if you want the results.

I get my stuff done, get back to the hotel, and open the door.

She’s already there.  Naked, under the covers.

……Aaaaaaaand Gerald is also there.  He’s on the other bed, fortunately NOT naked, but still.

Girl:  Well Gerald is going to go down to the bar while we…..

tWBS:  Not a chance in hell!!  He’s a recovering addict/alcoholic and you’re just going to send him down to the bar by himself?? WHAT THE FUCK IS WRONG WITH YOU?

This of course led to a fight, and a very huge lack of sexual activity.

Balls:  Ok, let’s count the ways in which this situation went awry and how you could have handled it:

Problem 1- It’s interesting that you care more about Gerald’s alcoholism than the naked girl in front of you.  Regardless, he’s a grown-ass man and not a child that needs to be constantly watched. If he relapses, that’s on him.  But, I know you and you are too compassionate for that. Unfortunately.

Problem 2 – Why did you yell at the girl?  That just blew any chance you had at getting any.

Solution 2 – You could have calmly said, “You know, with his situation, maybe a bar is not the best place.  Hey Gerald, are you interested in photography, ay? ‘Photographs, ay’, he asked him knowlingly? Snap snap, grin grin, wink wink, nudge nudge, say no more?”

Problem 3 – So,  SHE is naked and Gerald is in the same room.  Did it occur to you that Gerald saw her naked and she was ok with it?

Solution 3 – And the 2019 AVN for Cinematography for a Comedy Featurette goes to…. A Guy Called Gerald!

And first off, I didn’t yell.  But I was pretty miffed about it.  Second, I was not about to try to bang with Gerald in the room, camera or not.  Third, I can’t help that I thought Gerald deserved better than being banished to a bar by himself when he’s a recovering alcoholic.  Call me old fashioned.  I stand by it.

Anyway, I told her the room was paid for.  Have a nice night.  Bye.

tWBS:  Next up?  The Saga of the Former tWLS….that’s gonna be a multi-parter.  And could potentially get me into trouble somewhat.  She knows DFO (but probably won’t read it…he says hopefully).

Balls will really start calling me stupid when we get into that.  But the best is yet to come.  LOL.

Also I think Balls enjoys calling me stupid just a little too much, don’t you?  Not saying he’s wrong, but just that he enjoys it too much.

theeWeeBabySeamus
An unapologetic, even if often manic-depressive (it's a requirement given his choices of sports teams), fan of NC State University, the Baltimore Ravens and the Baltimore Orioles. When not parked in front of the computer and/or TV, can often be found on the golf course shouting obscenities to no one in particular.
Please Login to comment
12
19
0
12

This is so great. Kudos to both you magnificent bastards.

Do you know any other hot chicks who will foster a drunk? Asking for a friend (points at penis).

Let me just say that the actual outcome was hands down the best long term outcome possible.
Jesus Christ.

Wow. You are a dumbass, but a nice, decent, kind dumbass. 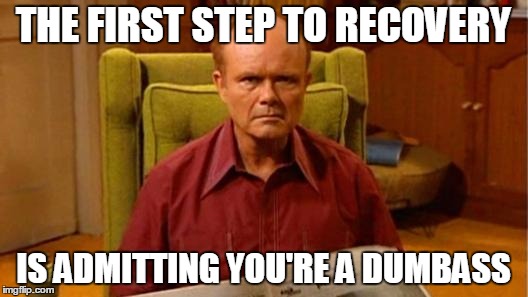 Also, wasn’t the former tWLS supposed to enter into the original plans for this Bawlmer trip?

Nope. She and I are technically broken up since February. Though still in contact and trying to rebuild a friendship now apparently. When I was in MD in May, she was in FLA, though I did swing by and checked on her house in MD because I’m a nice sumbitch.

Seriously, you enjoy that a little too much.

Balls, in addition to the MST3K style interjections, can you do a follow up 25 questions to these?

Was this…was this a prostitution situation? And you just didn’t get the message? No judgment; it happens to the best of us. But a girl meeting you in a hotel and bringing a “friend” that is going to hang out somewhere nearby while you do your thing…

Did you read the Stephen King book “Gerald’s Game” (Gerald handcuffs his wife for sexytime at an isolated cabin then has a heart attack and dies, and she has to figure out how to get out)?

Actually yes, I have read it. Which despite Balls’ humour musically, is why I chose the name change I did.

What the actual fuck

Every time I re-read this it get’s funnier.

I want to hear about the other girl! I guess that’s next episode.

You guys have no idea how interesting this is going to become.

The girl before this.

We’ll pick up with former tWLS next up for a couple episodes. Then some more of Asia.
But then it’s gonna get really really fun. Unless I chicken out.

Don’t chicken out. This is great.

If you’re talking about what I think you are, the official dfo advice column position is that discretion is the better part of valor.

BTW, this is awesome.

I think it was my idea, but I can’t remember. Anyway, I’m about to fuck this girl even though she brought a hobo with her. I don’t think I’ll use a condom. What could go wrong?

Yes, this was your idea.

At least Gerald got laid!

@twbS and Balls: You two guys are great storytellers and writers. It’s why I frequent this site.

I hope Gerald got him some. He deserves it.
I still need to change my hotel reservations though.

Also, you should consider experiencing reservations. As in “you know, things seem kind of off, maybe I should take a step back here.”

We need some sort of real-life Bitching Betty warning system for tWBS. “Pull out. Pull out.”

@RTD….that’s why I left.
I’m not as stupid as Balls likes to make me out to be.