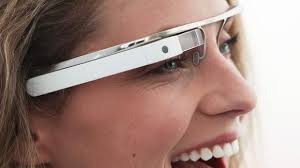 Simple experiment: Google images the term “Team Name” Fans and list all the categories that come up.

We are one team into this and already we are referencing other teams because no one really looks up the term “Bengals Fans” that often.

Deadspin coming up at number 4 is due to Deadspin having a Bills fan column. Number Six is basically all those other “sports blogs”: that swoop in and NFL Memes Deadspin articles as their own.

Number one is pretty much a series of pictures devoted to Homer Simpson emerging from, then disappearing into, and reemerging from the bushes a la “Homer Loves Ned”. “Like I’m a horse” is pretty much just the same picture used over and over again. 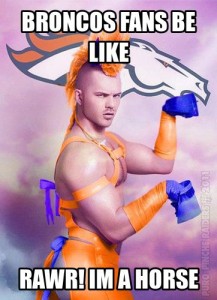 It is fitting that all words associated with Browns fans are pretty much negative in connotation. I am disappointed in that “Factory of Sadness” has not yet crept into the mainstream. So pretty much the Browns found another way to fail.

Just like how the Broncos have a category completely based on a meme the Chargers have one devoted to Kevin Hart making dumb faces.

Even Chief fans don’t want to be associated with the team. Otto Man is still too busy running for president to respond.

No, that is not Colts being too dumb to finish Super Bowl. It is a photo collage of this man. 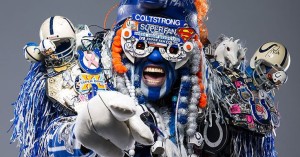 It is sad how the Dolphins get the typical “Meme” answer in the number one spot and then fill out the rest with other horrible and desperate teams.

I like to think of these rankings as the typical life cycle of a Jaguar fans. I am sad about my team, Holy shit, look what happened in 2014. I used to like this team? Better put on the bags. Screw it, I am better off rooting for the Buccs fan. (looks at team record) Err, I mean the Panthers, Yeah I am  Panthers fan now.

Jets are just as sad and angry as Browns fans but with a better tailgating experience.

Ah the Raiders. Your fans and their opponents fear of them will drive your team to either play twice a week, once for the regular fans and once for the white people (think Kanye concerts) or just pack up and get shipped to LA to be fully gentrified. It’s funny because it’s true. Sorry Raiders fans, your team owner doesn’t care about you and he really wants new shinier fans.

What is the difference between a vegan and Ravens fan? One will take up your day talking about how it is a lifestyle not a choice and the other doesn’t consume animal products.

How sad is it that people aren’t even googling about the Iron Curtain these days. Remember when the Steelers would instill fear into people. Like they dreaded playing against them. Just another thing that changed the day The Ben fell off his motorcycle, bumped his head and woke up a rapist.

Edit: it was the Steel Curtain. I know this. Does anyone have any Beano? My brain is farting like a Colts fan.

Once again the only reason why the Texans exist is so people in Texas who hate the Cowboys can still watch football on Sunday.

Not even google can find Titans fans. They must not exist.

I hope all the Commentists support Otto Man’s campaign by buying t-shirts.

Moose -The End Is Well Nigh
Reply to  jjfozz

I don’t think I much want to get in touch with my fanbase’s cosplay subculture ,, no ofence.

Just embrace it. I have.

Me too. It’s too bad Aaron Rodgers is not our QB…

I know a lot of people who look up the Iron Curtain these days, because I work with a lot of Cold War history faculty.

What an ironic juxtaposition.