Back in April, I made some predictions.  And I’m man enough to own up to my stupidity.  So here we go….

*Note: Probable Results , re: divisions, are pretty much cast at this point.

**Wildcard races are still interesting tho.

1. SF – If they can stay healthy, it’s their race to lose. Granted, that’s a big if.
2. LA – Clayton Kershaw, and everybody else, might be enough.
3. AZ – Zack Grienke won’t be enough this year for the Snakes, Paul Goldschmidt seethes.
4. COL – No pitching is a poor plan for success. Balls are gonna be flying out of Coors like…(damn…I had something for this).
5. SD – Hey at least the weather’s great…let’s hit the beach.

AZ, worse than expected.  That’s not a bad thing necessarily.  I was once, briefly, a yuge Dbacks fan.  They managed to fuck that up quickly after the ’01 WS championship.  SD, amazing over achievement, actually had some grit.  Nice job, Mexican priests.  Rockies…yeah, you were about right.

I hereby apologize to the Dodgers.  But not too much bcuz I still hate ’em.  They are like Boston and NYY mixed together.  Fuck those guys.  Go back to Brooklyn you damned tools.  At least there, people actually cared about you.  Suck it LA.

1. CHI – Most talent, best manager, we can only hope history continues biting them in the ass. Go History!!!!!
2. STL – Never, EVER, count out the Cards…even if no pennant, they’ll be in the playoffs. Then promptly kick YOUR team’s ass.
3. PIT – Young talent, if it matures, could make Yinzers very happy…Next year.
4. CIN – To win, you gotta score runs…Cincy no so very goodly at that. Marge Schott’s ghost is gonna be up to four packs a day by the All-Star Break.
5. MIL – When the crown jewel of your lineup is Ryan Braun, just lay down and die already.

I am smrt.  But Jeebus fucking Christmas, Cards.  Did you just decide to take some time off after the All Star break?  Cubs?  Fuck you (sorry Yeah right and ICRM…but you know you would prefer to crash and burn and continue to whine about it for the next coupla decades).  Pittsburgh still a year or two away, just as I expected.  Young team to be reckoned with in the future.

But look at that division, would ya?  I pretty much nailed that one.

/pats self on back

1. NYM – Fuck you, Mets.
2. WAS – Our best hope to keep those Mets assholes out of the post-season lies in DC. Sadly, now I have to hope Bryce Harper does well. And Dusty Baker. FML.
3. MIA – Stanton and Fernandez will do some good things. They’ll also do some inexplicably stupid things. If Donnie Baseball can figure out the whole “manager dynamic”, they’ll have a shot (spoiler alert…he won’t).
4. PHI – Ryan Howard is looking around like, where the hell did everybody go? The only thing keeping these guys out of the cellar will be…
5. ATL – Oh how the mighty have fallen. And Oh how I love it. How ya like me now, Nick Markakis?

Nats pulled away.  Yay foar Trea Turner.  Love that guy…yes that’s yet another shameless NCSU plug.  That’s him on the banner image, btw.  He’s due to hit puberty early next year.  Google him if you have to.

But still fuck you Dusty Baker.  You too Bryce Harper.

You too, Mets.  Happy the Braves sucked as expected.

RIP Jose Fernandez.  I said you’d do some stupid shit.  I had no idea how right I’d end up being.

1. HOU – Carlos Correa is a force to be reckoned with. And Houston is loaded. Even Brandon Weeden couldn’t fuck this up for them…I think.
2. TEX – If they stay healthy and get some breaks, they could push Houston.
3. LAA – Glory Days…aging high priced talent. They could compete, but probably won’t.
4. SEA – Mismatched pieces with no chemistry. They will never be more than the sum of those current mismatched pieces, and probably often even less.
5. OAK – See Seattle. But hey, at least there’s a good team just right across the bay.

Yeah, I mucked this one up pretty good.  Houston’s historically bad start put them in a hole they couldn’t recover from.  Seattle…well, fuck them.  They did a good.  But fuck them anyway.  At least I pegged (LOL) Oakland for the chumps they were destined to be.

1. KC – I really wanted to find a reason not to put KC at the top. I couldn’t.
2. CWS – Outside shot to unseat KC if starting rotation comes together. And it might, but probably not this year. Chris Sale and a still way too young Rodon ain’t enough.
3. CLE – Great rotation, but say it again with me folks…if you can’t score runs you can’t win.
4. MIN – Surprised a lot of folks last year. Will not surprise a lot of folks this year.
5. DET – Lotsa old guys gonna have to produce, lotsa newcomers gonna have to fit in. Good luck with that.

Well, would you look at Cleveland?  Run diff of 107.  Some dumbass said they couldn’t score runs back in April.  That guy was stupid.  You should throw rotten fruit at that guy if you see him.

Indians are now my dark horse for WS Champs, btw.  KC, I still hate your asses, but also kinda pissed how stupid you made me look.  But still happy you sucked it up.  We’ll chalk it up to mixed emotions, shall we?

Detroit?  Fuck you.  Just fade already (moar on those assheads in the bonus wildcard section below).

1. TOR – In spite of losing Price, the division is still theirs to lose.
2. BOS – In spite of gaining Price, they need some guys to improve on their pathetic ’15 efforts.
3. NYY – Yanks avoided spending a shit ton of money this past offseason, for the first time in like forever. They’ll regret that.
4. TB – Lotsa youth, lotsa offensive question marks. And no Joe Maddon.
5. BAL – Potent but often streaky and unreliable offense, no reliably consistent starting pitching.

Boston figured their dumbasses out, much to my chagrin.

But yes, I pretty much called the top half.  Other than Baltimore.  And since they’re my hometown team, I’ll take it with a grain of salt.  Orioles overachieved SO MUCH this year, leading the division for the better part of the season.  With their cut rate/patchwork pitching staff, still not sure how it happened.  But aside from Baltimore, I’m calling this one a win.

Bite me if you disagree.  I need to feel smrt.

Ok, so these are still in question mostly.  The two in each league who do end up above the line get to play what is essentially a one game playoff.  Which in baseball circles pretty much sucks.  But still…here we go…

Right now, the Mets (fuck you) and the Giants (fuck you slightly lessly) are in if things ended today.  The only real challengers to those positions are the Cards (you had your chance, losers) at one game back.

Miami and Pittsburgh are too far back to have a reasonable hope.

The American league East, as usual, rules the roost.  The surprise, to me at least, is still Baltimore.  A pleasant surprise, btw.  The Orioles have tried their best to shit the bed since the All Star Break.  A rotation made up of Chris Tillman and the rotating Three Stooges, more or less.  Yet they still (actually, again…they managed to recover after a monumental fuck up in late August/Early September) hold a 2 game lead for the 2nd spot.

Both Detroit and Seattle could derail things easily.  Houston…probably not.  NYY, no chance with only 7 to play.

So there you have it.  It’s baseball.  Shit happens.  And yes, I’m willing to be called stupid.  Won’t be the first time.

But overall, I think I did pretty good.  And you better think so too.  Or else I’ll come to your home and kick your dog.

Also, my apologies for the formatting of current standings.  Copy/Paste from CBSSports.com doesn’t seem to play well with WordPress.  Meh.  What can you do?

theeWeeBabySeamus
An unapologetic, even if often manic-depressive (it's a requirement given his choices of sports teams), fan of NC State University, the Baltimore Ravens and the Baltimore Orioles. When not parked in front of the computer and/or TV, can often be found on the golf course shouting obscenities to no one in particular.
Please Login to comment
7
26
0
11

Oh, did the Yankees sucked this year? 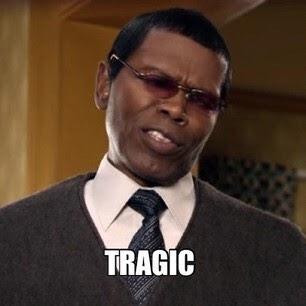 /You are a seer, sir. For the most part.

Dodgers win in 7 over Texas, with Vin Scully showing up to call the last game. Walk off homer by, let’s say, Howie Kendrick?

Then we could have some riots in LA. I miss the 90s.

I love that one.

All in all I believe you did quite well.

Thank you for that comforting lie.

Agree with litre_cola; you were kinda sorta prescient. And precious.

I AM very precious.
Thank you for noticing.
😉

I’ve never been that excited about anything.

Damn, Seamus, why for all the Mets hate?

I actually used to have the Mets as a secondary favorite.
Then Armando Benitez happened.
Sorry.

At least you hate the Cards, too. I guess I can forgive.

I actually don’t hate the Cards. Just kinda pissed at them currently.

Chris Elliott is still getting “work”. Good for him.

Dee Gordon counters your no crying in baseball.

I said it yesterday but that shit absolutely wrecked me when I saw it. One of the most powerful moments I’ve ever seen.

Kudos to Colon for grooving him a meatball you or I probably could have hit out of there.

That I think was because he didn’t want to walk him and it was a 2-0 count.