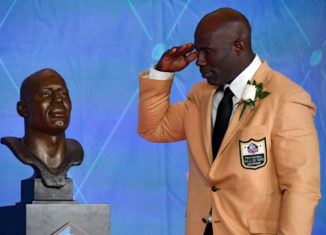 This will serve as your 2017 Denver Broncos preview.  Much has changed, whilst much has stayed the same.

First and foremost, the unequivocally positive change, as history’s most grievous injustice has been righted.  Terrell Davis (as pictured) is now a member of pro footy’s Hall of Fame!  Words cannot describe how fanatically, bloodthirstilly (not a word?) we Donks folk believed in his cause, so I won’t go through it again.  Suffice to say, WOO!!!!!

There was also the firing of Strokey Kubes, just one short season after winning the Superb Owl and COY honors.  Yeah, life comes at you fast alright.  And so much FOAR being Our Eqine Lord and Saviour’s bestie, I suppose.  Wade Phillips was also allowed to depart for RAM IT!!, but his protogee Joe Woods was elevated to the position.  So, not too much changiness there.

Plus, Kansas City’s own Jamaal Charles is in the backfield.  No foolin’!  Will this be shades of Neil Smith, the longtime Chef who left town because he wanted a ring, only to get two of the bad mamajamas alongside the aforementioned duo of Elway and Davis?  Uh…not so fast.

Because on the “more things stayed the same” side, you have Denver’s two main QBs.  Yup, still Trevor Siemian and Paxton “QuarterPax” Lynch.  The good news is, both these guys are another year older/possibly wiser, and no longer stuck in the incredibly complex/arguably outdated Strokey Kubes system.  The bad news is…they are still fucking Trevor Siemian and Paxton Lynch.

Yes, you have a team that is built around defense.  Noted chicken farmer Von Miller is one of the 3 best players in the NFL, and the “No Fly Zone” secondary is probably the best overall unit in the league.  It’s not like you need Aaron Rodgers-level play to win games here.

But it is still a QB-driven game, and you need more than bottom-quartile performance.  What I hear (which to be fair, means very little) is very not encouraging.  Siemian still profiles as a good backup/below-average to poor starter.  He has bad footwork, and tends to lock in on his primary read.  Not that anyone might develop such habits playing behind the turnstiles Denver has tried to pass for starting OTs, but still – it’s a problem.  There’s also the “Captain Checkdown, Jr.” moniker he is developing, though I think that’s more of a contrast to QuarterPax, who apparently treats everything like an audition to show off his million dollar arm (so nobody will notice his 5-cent brain).  There’s a reason this dude ended up at Memphis, running a very simplistic offense.  Nothing I’ve seen to date leads me to believe he can handle an NFL playbook, though I can see the argument for letting him “sink or swim” in this pivotal Year Two of his contract.  He ain’t gonna get any smarter.  He is what he is.  Our Equine Lord and Saviour wants to see the shiny toy he traded up for?  Fine with me.  This looks like a transitional season, winning 7 or 8 games at best, anyway.

But there are reasons for optimism.  I did not like Denver reaching with their 1st round pick and taking cro magnon LT Garett Bolles.  But as non-true 1st round talent as he may be, he seems like he can at least run block, and not be a pure turnstile in the passing game.  Tis true that Denver had to do something, someone was gonna die back there.  Rounds 2 and 3 were full of meh for me.

Fear not, for the draft began on Day 3, and it was fabulous.  Here’s some long-term thinking in action.  Meeeechigan TE Jake Butt in the 5th.  Coming off a knee injury, but he should still get his feet wet in 2017, and be ready to take a lead role in 2018.  The perennial kick return sinkhole?  Filled with Swiss Army Knife and possible Tyreek Hill stand-in (ain’t everyone looking for one of those now?) Isaiah McKenzie of UGA.  He’s already flown past 3rd round pick Carlos Henderson on the depth chart, and is the talk of camp.  In the 6th round (nod to TD), they added to the RB stable with Coastal Carolina’s De’Angelo Henderson.

Then came Mister Irrelevant, and it just might be the jolt the franchise was looking for.  Jim Kelly’s crazy redneck nephew Chad, kicked out of Clemson for Christ’s sake, hero of Ole Miss, two-time slayer of Nick Saban’s Roll Damn Tide…and apparently new Coach Vance Joseph’s favourite QB in the draft.

Here’s the thing – I don’t disagree with Joseph, or think he’s bullshitting.  I did not like this draft class for QBs.  As I watched each one come off the board, I kept scoffing “he sucks” again and again.  Even the ones I admired, like Clemson’s Deshaun Watson, I questioned the NFL fit.

But I kind of forgot about Kelly.  He had shoulder and knee injuries his senior year (after beating Alabama), Johnny Reb’s season went down the toilet, and his draft stock plummeted (double major injuries plus crazy redneck will do that).  But you go back and look at the tape.  It’s all there.  He’s got the size (6’2″ and solidly built).  Much like DAK! he played under heavy SEC pressure, but kept his composure, scrambling primarily to keep the pass play alive with good footwork and ALWAYS squaring his body up before releasing the throw.  Like a good jump shot in traffic, you just can’t teach that.  It’s innate, and the great ones have it.  Chad Kelly has it.

The question is…will he ever do anything with it.  Has he grown up?  Will his injuries heal properly?  Can he pick up and run an NFL offense (though Ole Miss’ was relatively complex, as I recall)?  All this does make him a long-shot.  I mean, DUH.  But in a weak draft, you don’t trade up for the best weakling.  You find a dart late, and hope it’s a diamond in the rough.  Use the blissfully loose IR rules to give him a nice redshirt year, then let him loose in 2018, when Jake Butt is ready to burst out (PHRASING!!) and maybe the rest of the young roster starts to come together.  And hopefully next year’s tackle class is a little better and Denver can even shift Bolles to the right side where he’d possibly be great?

If not, you still have the somewhat adequate Siemian, and you look for a new saviour in 2019.  One suspects Elway drafts another QB dart late in 2018, too.  For as the Horse showed us last December/January, it ain’t about sentiment in Dove Valley.  Winning is everything.

There was also the firing of Strokey Kubes, just one short season after winning the Superb Owl and COY honors. Yeah, life comes at you fast alright.

Almost as fast* as a stroke can be diagnosed.

We kid, but these are no fucking joke. My grandmother died of a stroke twenty years ago, and I don’t want you to ever go through that.

Not only can save a person’s life just catching it early, but new medicine available since that time is now available to prevent fatal or even the most debilitating effects if administered quickly enough.

I was drunk watching that in a bar. I rubbed MY shoulder a little.

Well, your logic is flawed on……. fuck it….. good preview. The hawt taeks are as stroung as media expurts.

My homer pick is 9-7 or 10-6 due to slightly better line play on both sides, be RB and QB play due to experience and the new system. Even at 10-6 no playoffs. Counter point; a pretty tough schedule with weird timing of the the bye, road games, and games against good teams off of their bye. That and the Chefs and Waiders are pretty fucking good. I really enjoy this picture. Huzzah!

My bottom-quartile performance consists of checking the fridge to ensure there are more waiting.

You know how I know you love your team unconditionally…

Even as a former fan of a divisional opponent, I always felt TD deserved to be in the Hall and I’m really glad to see him finally get in.

Please smack the shit out of the Spanoi this and every year they reside north of Pendleton.

I’m rooting for Siemian. I remember him being an average QB with above-average courage. His leash is short; he’d have to be Montana Part II to keep the job.
Great preview, airtight management of expectations. Them AFC West divisional games look to be Must See TV. I think they’ll beat each other up. Maybe DEN will be left standing. I wouldn’t mind that at all.

He kept coming back for MOAR, even with a separated shoulder that he probably shoulda went on IR, at least late in the season, fer.

Then again, fine line between brave and stupid, as Mama Hippo always tried to teach us (fat chance getting a boy-type child to buhlee dat).

Informative, snarky, self loathing could only be the Hippo. Great work.
Also I believe he should be referred to as “The Chad.”

I think your analysis is pretty solid here. I see Denver going 7-9 and their defense keeping a lot of games close.

I’m sure he left his DNA all over the city…

I shouldn’t Clap for that joke, but I am glad Sanchez is a Gonor-rhea.

He brought his herpes derpes to Chicago

It’s surprising that they took him, warts and all.

THAT is some damn fine work fellas.

I suddenly feel a lot better about the Cowboys’ visit to Denver this year.
/Cowboys lose 44-10

Apparently, Jerral lost an entire night’s coffin sleep after failing to trade up for QuarterPax. Instead, he was stuck drafted some kid with a processed meat product head. smh

Did Aqib Talib get shot this offseason? If not, he probably should have.

“I keep telling you, NO SHOTS.”

– Jay Cutler at the pediatrician’s office

Nah, “Two of the Good Ones” ain’t getting out of camp two years in a row. #NoDaysOff!

I’m rooting for this Chad Kelly to immediately burst on the scene and go from Mr Irrelevant to 4x NFL Passing Leader, MVP, and 7x Super Bowl Champion if for no other reason than to finally close the fucking book on Cheating: Why Tom Brady’s Legacy Can’t Not Get A BJ Every 5 Seconds.

?ssl=1
“Crowd: **Cheering** “He’s moving!” Trainer: “These post mortem muscles spasms creep me the fuck out! Let’s get him to the glue factory.”” -LemonJello

But with so much defensing talent it can’t help but go 6-10 or 7-9, and maybe boomerang back in 2018 (though a longer rebuild curve can’t be ruled out, depending on whether the secondary can be mostly kept together).