But for the quorum of three men sitting at a long table on stage, a dilapidated auditorium sits empty of NFL players. Where typically an audible murmur would be present as union players would engage in private discussions that oscillate between topics of offseason recreation and training camp activities, this meeting was called specifically by the NFLPA Board for the NFLPA Board.

Zak DeOssie: Well, let’s get started on this, guys. No point in sugar coating things, we need to replace Eric Winston as NFLPA President.

Michael Thomas: Yeah man, you’re right. I mean, it’s not fun to admit but he’s holding us back.

Sam Acho: Don’t apologize. Eric is a good dude but this is the business side of the house for us and his contributions to the union have been insufficient. His heart’s in the right place, sure, but we need results and the only way to do that is to replace him with someone else.

DeOssie: Which brings us to why we’re all here. We represent over two thousand active members as well as over three thousand former players. We know how weak DeMaurice is at the helm so change is going to have to come from the executive committee. So who is going to run the committee now?

Thomas: I hate to say it but we need a personality. Someone with charisma. Someone that makes the players all take notice. I mean, yeah, millions of dollars, our health, and our livelihood should be enough of a motivator but, shit, you know how these kids are anymore.

Acho: They all just want to play their XBoxes and drink Monsters all day!

Thomas: Exactly! And we need an NFLPA President who can mobilize these players. Who can make us ready to take on the owners, collectively, in the next CBA negotiations. Eric’s approach of playing nice and trying to beat the owners by winning over the fans — let’s be honest here — is a fool’s errand.

Acho: But who’s actually any better? I mean, for one thing, we’re busy. Training camp is coming up and we’ve got taxing, time-consuming, stressful careers. I sure as hell am not interested in spending my 2018 blowing up Matt Stafford just to have to engage him after the game about the importance of us all locking down a better pension deal.

DeOssie: A fair point. Maybe we need to look to a retired player. Someone with the time to devote to the cause. And, I know, why would a guy who is out want to help those of us who are still trying to earn our purse? Well, I think someone like that does exist. Someone who has been through the battles that are contract negotiations and knows how to be greedy — but will be greedy for us.

Thomas: And a player who knows the old ways. So much of the game is different now and, you know, the owners like to blame it on us like, “Oh, they don’t want head shots so now the game is unwatchable.” We need someone who can stand there and be like, “No, watching a five wide set is going to produce a much more entertaining play than handing the ball off to a fullback.” Because there are fans who, in their heads, think that the way they played in the Ivy Leagues in 1965 was somehow more graceful or electric.

DeOssie: Another excellent point. This is about the fans. Demaurice will handle the policy and engage the Shield. We need the President to be someone who can win over the fans. Keep them on our sides through all these manufactured crises. I mean, we’ve seen the studies — fans don’t give two shits about anything from the catch rule to the salary cap to the domestic abuse policies; but they need someone to tell them how to feel about these issues because that’s what the NFL is, a story. And we need to highlight the storyline for them, not let the owners do it.

Acho: Oh jeez. More old timers coming in and telling us how much better the old guard was.

Owens: Look, I’m gonna sell it to you straight. You want to win over fans? I’m your man. Period.

DeOssie: Terrell, you won’t even attend your own Hall of Fame induction ceremony. Hell, you’re even fighting online with some of the most famous sports talk personalities about it. I’m not sure you’re exactly who we need representing the NFLPA right now.

Owens: Oh, you’re talking about Low Energy Jason? I thought you said someone famous. What’s your point? I’m also working out with Julio Jones. I got the respect of the top non-Fitzgerald wide out in the league. Why do you unfairly not mention that?

Thomas:T.O., you’re a strong candidate for sure. But we’re talking about the man who will represent us as we take on the owners, the fans, the media, and the corporate machine that wants to ring every cent of value out of us. This is not a decision that we are taking lightly nor —

Owens: I’m gonna go ahead and just finish this conversation for you. I’ve got style. I’ve got talent. I’ve got charisma. I’m fearless. I’m bold. I’m the man every sloven NFL viewer insists they would be if they had the talent, the work ethic, and the discipline to hone this craft. And I’m the likable Dancing With The Stars entry that all their wives insist must be on their side. And, just a reminder, I don’t need to be here. I’m rich. I’m successful. I’m going to Canton — and refusing the trip to Canton. I cannot be bought. I am the only person who can chart a new course for this union.

DeOssie: Tha all may be so but, as the Executive Committee, we are going to have to first take a vote and —

Owens: You do what you gotta do. I’m gonna put out a release to the press that I’ll be announcing my new position with the PA next week.

Thomas:Next week? But I think we owe it to Winston to bring forth the issue at the next meeting before the Hall of Fame Game. I mean, he’s served respectably and honorably for years and we should see him off the right way.

Owens: No. He’s fired. Now, if you’ll excuse me, I’ve got some official NFLPA Presidential business to tend to.

blaxabbath
I sat on a jury years ago, 2nd degree attempted murder case. One day the defendant wore sneakers with his suit to court. It was that day I knew he was guilty.
Please Login to comment
5
3
0
5

Hey, if you want cancer as your union president, vote Silkwood!

Can I vote for Silky instead? 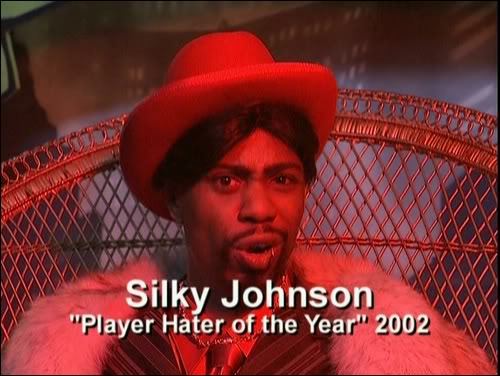 Also I feel like some members of the RNC are currently reading this roman à clef and wondering how the hell you got a microphone into their secret lair.

“We don’t want no spaghetti slurping, organ grinding Eye-ties around. Those dirty Papists are practically Mexicans.”
-RNC head of diversity.

Acho: They all just want to play their XBoxes and drink Monsters all day!

Eli was really excited about his playdate with Sam until he was informed that the Achos have “a closet full of Monsters”.

I wasn’t expecting TO. I though Kaep, to send the union in a more militant direction.