Yes,  I know.  I’m sad too.  However,  there is no need to fret as the New Year will bring us a TON of fun footy action!

We will have another World Cup as the world’s best women compete in France in the summer.  We still have the knockout stages of the Champions League as well as the beginning of qualifying for Euro 2020.

But today we only have two leagues in action: the EPL and Serie A. Here is today’s schedule (all times Pacific):

If you’re reading this at about the time this post goes live,  you will no doubt want to catch Juve on the Deuce taking on La Sampdoria. Avid followers of la vecchia signora know that she is undefeated this season with only 2 ties amongst 16 wins.

The Match of the Day,  however,  is in the Premier League with league-leader Liverpool looking to extend their lead at home against Arsenal.

Truth be told,  I’ve always had a soft spot for Arsenal because arse is British slang for butt and I’m an immature kid at heart that loves butts.

Which leads me to the Sexy part of this post.  Señor Weaselo did a tremendous job recapping the Year That Was at DFO and that,  understandably,  left little room for pics.

I aim to rectify that this morning.  And, of course,  what better way to wake up for the start of what is likely a four-day weekend for many of us than with an eyeful of hot sexy humans?

This entire selection of pics is curated from the “fútbolbabes” Twitter feed which Wakezilla introduced us to a while back.  Truly the gift that keeps on giving. Thank you,  good sir!

To start,  THE LEAGUE LEADERS! 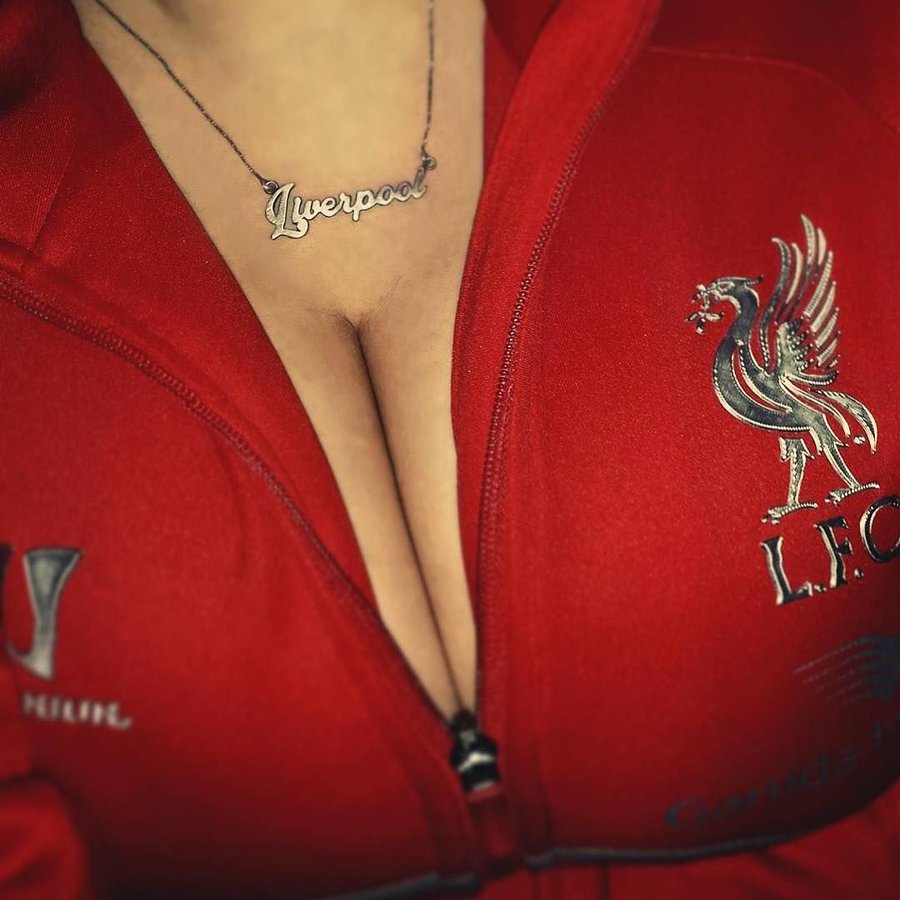 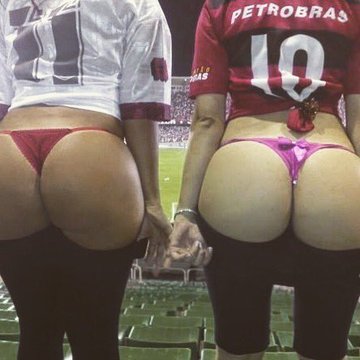 So,  you’re telling me I’ve already got one yellow and I shouldn’t take down the fast forward from behind? Hmmm, tough decision… 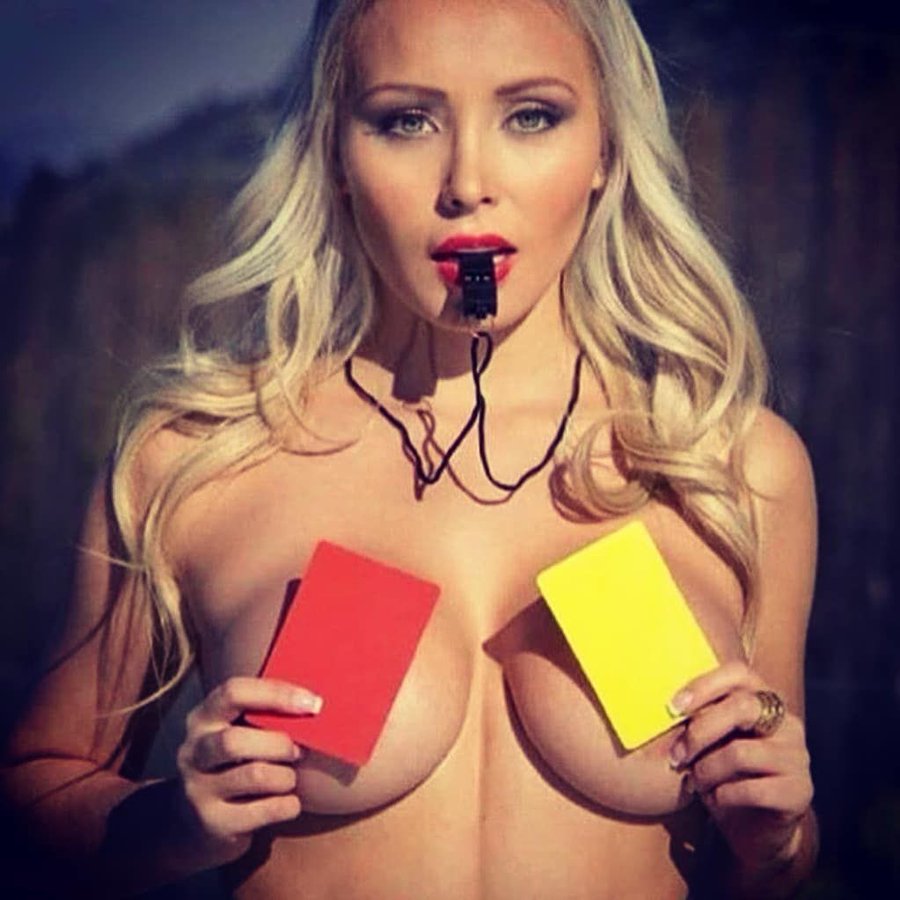 The poor girl is playing as México!  She’ll need some consoling. 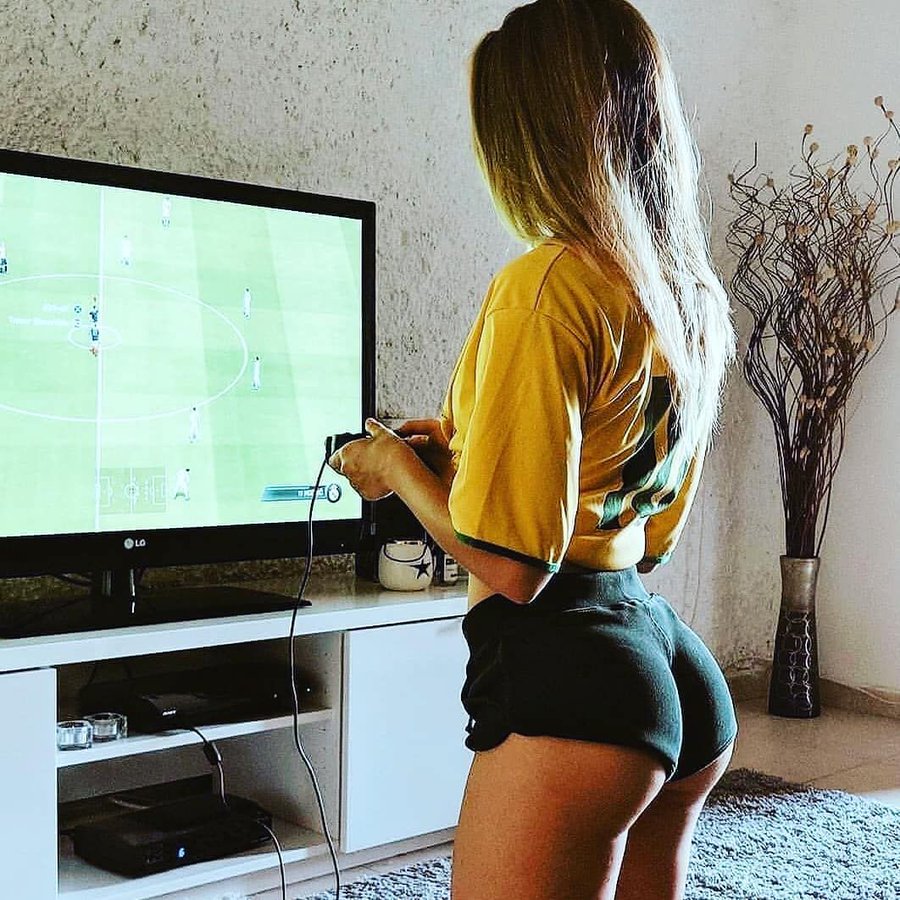 I don’t care who you are,  that’s brilliant marketing! 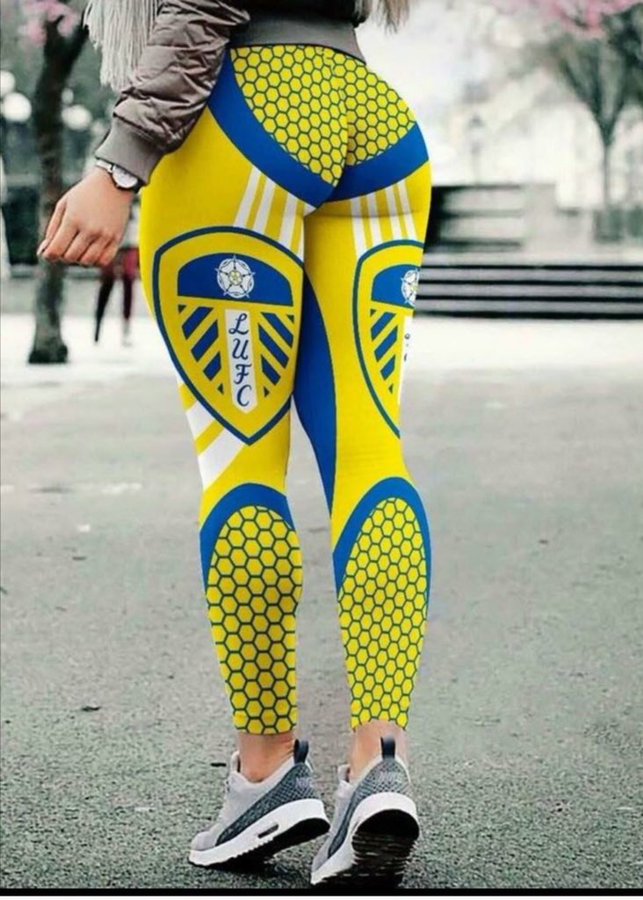 Yes,  I said to watch the Italian league! 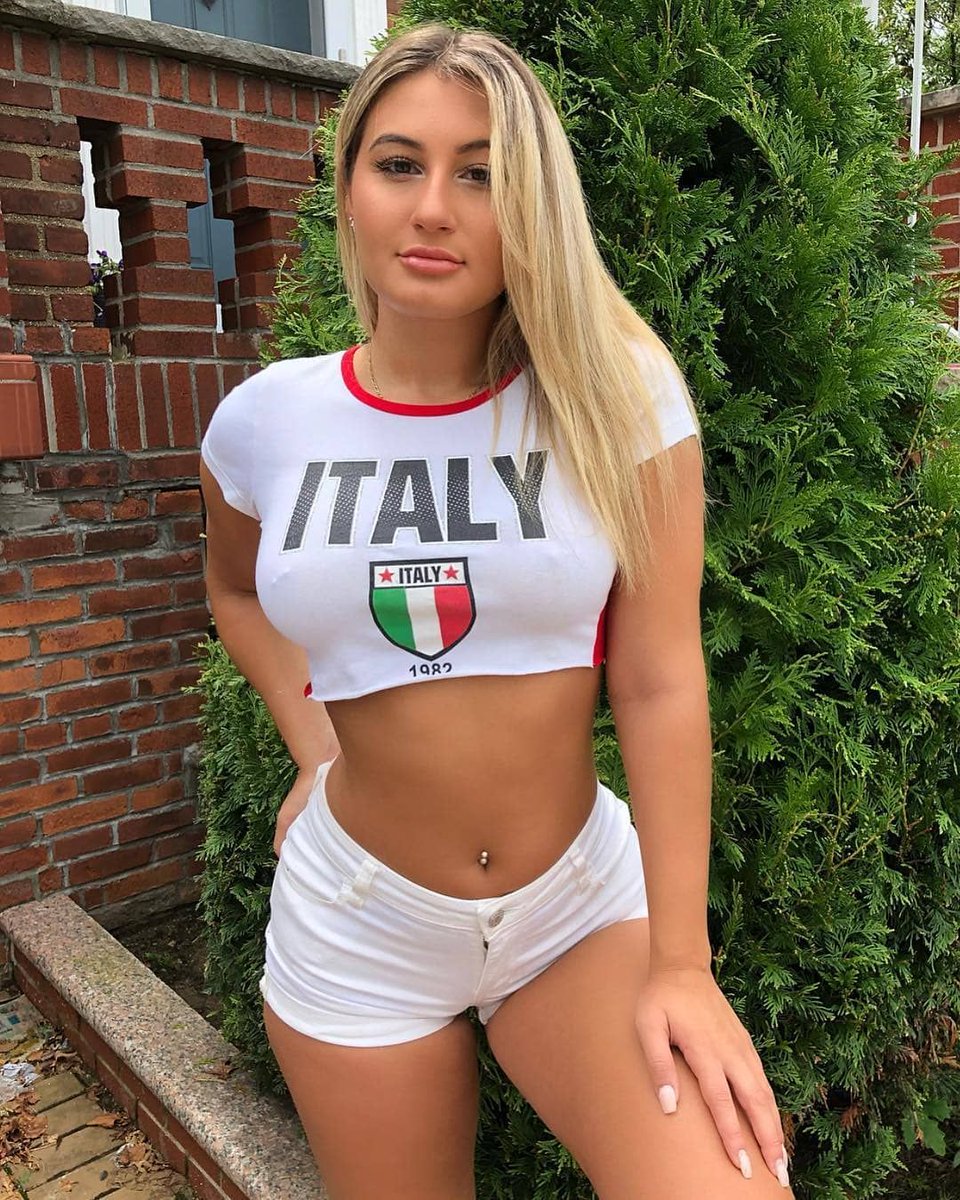 AC Milan plays the last game of the day! You could say they bring up the end! 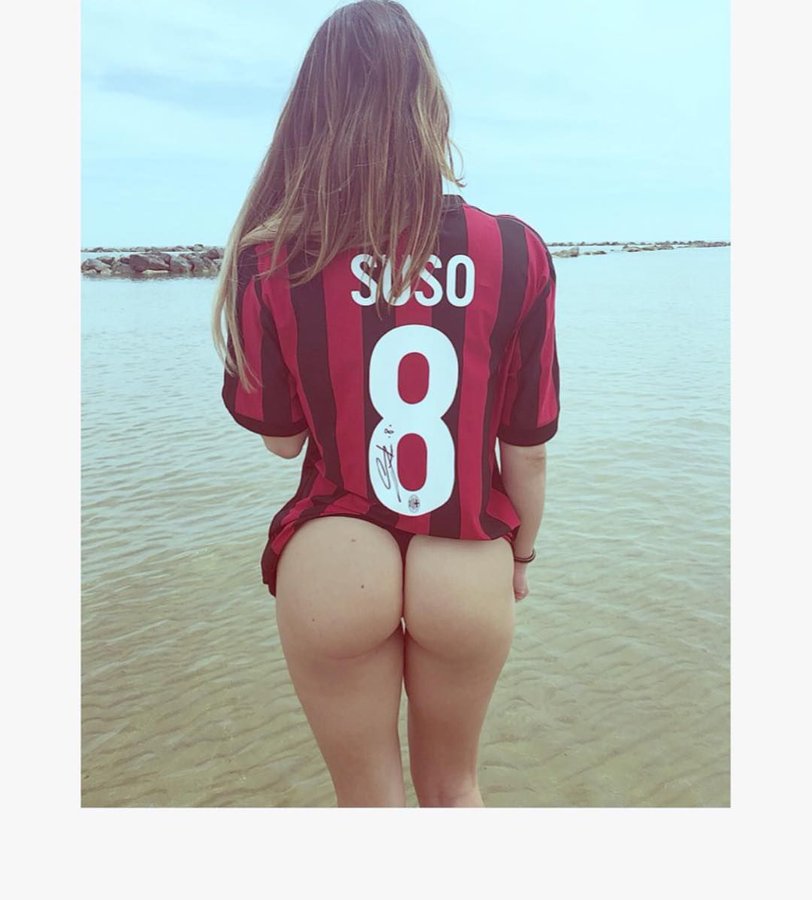 I’ll be here all next year folks!

Give the fútbolbabes team a follow on the old Twitter if you’ve got it.  They’re doing the Lord’s work.

That’s all for now.  Enjoy the games! 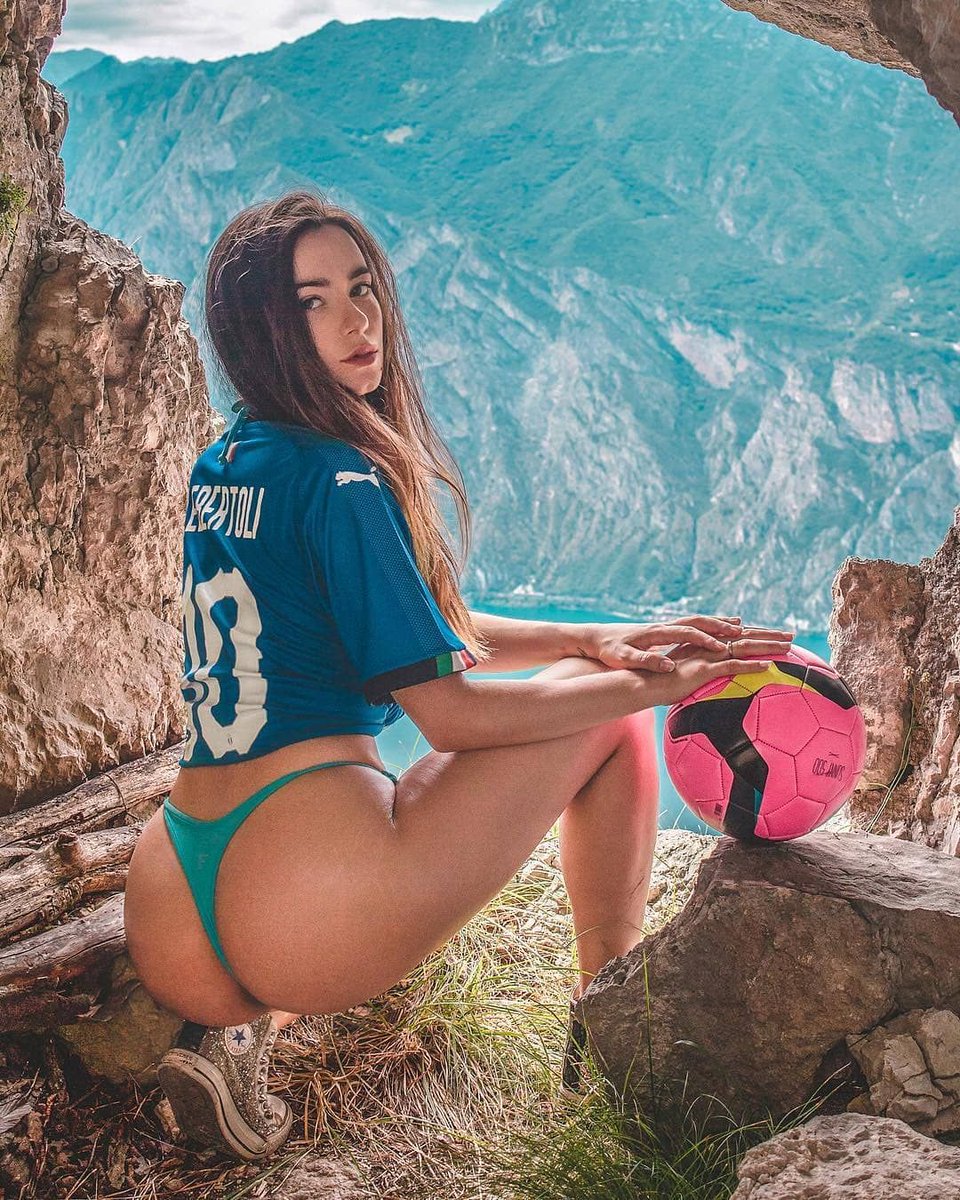 Just got home from the hospital! Baby being passed around. Saw the Gunners score just before we left, time to check and see if their lead held O CHRIST ALMIGHTY WHAT THE HELL HAPPENED?!

Great hustle for the last lesser footy live thread of the year!

Hippo thanks Cardiff for that late winner, saving me total tilt.

/I also accidentally bet $100 on “under 1.5” in the Everton match, which turned out a nice silver lining

Wow, this whole soccer season just came and went so fast! I think of all the joy and action and excitement I would have seen if I’d ever bothered to watch a game.

Wait. Since when did European soccer seasons have endings?

Think of all the 0-0 draws you missed!

That outfit seems wrong for winter. I’m afraid she’s going to get cold. Someone should warm her up immediately.

I thought it was better to warm up from the inside to the outside, so I think I should be the one to warm her up.

Gentlemen. You can do both.

Daughter’s boyfriend is coming to the house so we can meet him.

How many of you can get to CT on short notice?

Thanks, I got a guy.

It’s a tragedy that Judge Smalls isn’t even close to the shittiest people who are judges IRL.

If you decide you don’t like him, remember that it’s probably easier to scare him (or her) off by being TOO friendly to him, as opposed to hostile.

“Oh you have gauge earrings too? I was thinking about getting some myself, who’s your guy?”

Does he do prince alberts?

If you buy the ticket, then I’m walking out the door to the airport now.

Sending out the DFO-Signal? That can only mean one thing;

My son is in CT visiting his mother and sister. He will work really hard for some beer and $20.00. Are you near Waterford/New London?

He is also 6’4 and 280 lbs and is heavyset, but he moves full beer kegs around all day so he is strong.

I wish I were 6’4″. Those extra couple of inches up top would really come in handy compensating for the lack of inches down below.

I have on one of these weird TV channels (like 12-2; Laff tv) and this show is Recipe Rehab. Point is, these two chefs have an hour to update a family recipe. So they return from commercial and the host says, “30 minutes in to working on this recipe, they’re racing to get this done. And they are working overtime on these recipes.”

How do you work overtime when you are within the time limit?

I don’t know, it’s probably some kind of tax dodge.

WIfe got me a Surface Go for Christmas. It seems alright, so far. I’m excited to use it to watch NFL replays.

I love my Surface, it allows me to watch Sunday Ticket while cooking. Plus it is so much better than taking a laptop on trips.

Shawshank Redemption is on Hulu. I realize that, when I have blaxito alone, I can really only ‘watch’ things I’ve seen a million times. So I had it on yesterday afternoon and, hands down, it’s still the best movie I’ve ever seen. I love that film.

I would like to tell you that blax cleaned up the poop, and that afterwards blaxito pooped inside his diaper like he was supposed to. But fatherhood is no fairly tale world…

Parma vs Roma is also known as the battle for hard cheese supremacy.

Parmesan cheese is so ridiculously inexpensive in Italy it insane. I could eat a block of it like an apple. With wine of course.

I have a wedge of it on hand every day of the year without fail. I use it as salt in some cases and just grate it over everything.

“Yeah but the plane ticket puts you over budget.”

“Just mix some sawdust with salt; it’s not like they can tell the difference.”

Emanuele scored for Chievo. Sadly, they are not in Paris…

Also, I’m shocked there are this many of you all awake at this hour.

The last episode of season 11 of Parts Unknown is Bhutan, which is easily the most exotic-seeming of the places Bourdain visited in those last few seasons.

yeah…and how’d that turn out for him?

Whenever I read that country’s name, I think someone is missing a genius marketing opportunity by not producing Bhutan-e Lighters.

Brighton wave blue rags around like the Yinzers and their terrible towels. I hate them now.

Everyone piles on Mighty WHITEY for the plastic clappers.

Hey Jude has to be the UK’s version of Seven Nation Army.

So far so good. Armenia. Hong Kong. Berlin. Watching Louisiana bayou during Mardi Gras. I was rather impressed and intrigued when he went to Nagorno-Karabakh in the Armenia episode.

Who you talkin bout?

Season 11 of Parts Unknown on Netflix.

Such a brilliant show. The beginning of No Reservations was fantastic too. Then he got a bit corporate but got so big he got to do what he wanted to do.

The way season 10 was edited it was like they wanted the specter of his death to hang over the whole thing, but they seemed to mostly knock that off this time.

One of the best produced shows on television ever. Loved it.

The Old firm Derby is a really good game right noe if anyone is bored.

It’s nae on the teely nor ESPN+ here!

I use teh reddit streams pal. It is nae problem, jess some wee popups at teh start pal.

no thanks, I just fixed the laptop battery, I don’t want to give it AIDS so quickly

I have had 0 issues on my chromebook using reddit streams for years. (When teh Fulham was down)

Kirk Herbstreit got dressed in the dark this morning, apparenly.

If anyone is watching the Juve game the ref just gave em the game on a brutal Patriots like call.

The same thing happened in the Napoli-Inter game. The NFL must recruit refs in Italy. 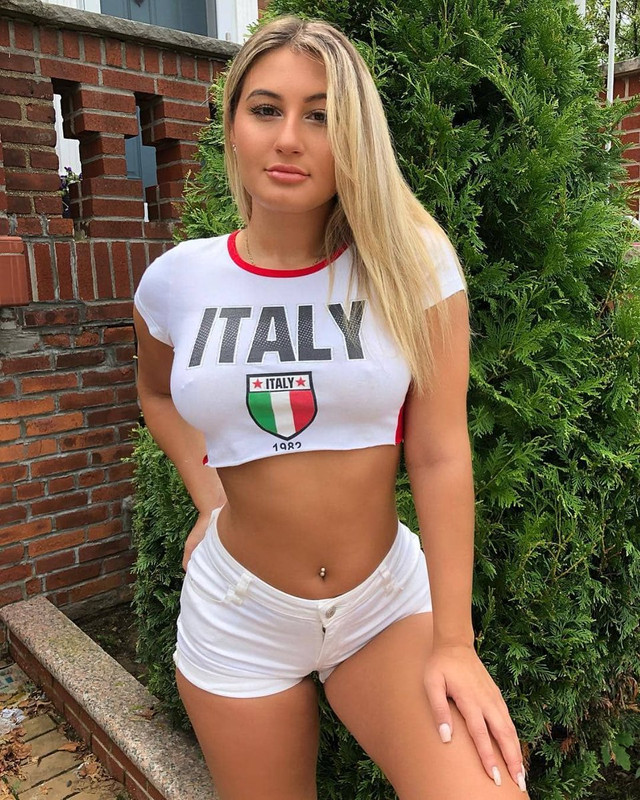 9/10….would spend hours making Chicken Piccata for her.

(also, there’s a joke there about pounding the breasts, but I am too cultured and refined to make it)

I hope they start paying the bill.

Is that the lake effect?

No, all fresh water freezes below 32, not just lakes.

I want to marry this girl.

I like to imagine that all the scrapes on the egg are from the cameraman getting too close on previous takes.

Balls as a person who likes Scottish culture and people. YOU FORGOT THE OLD FIRM DERBY YA SLAPHEAD.!!!!

Dammit!! I knew I should have clicked on the Scottish matchups!

I am awake at this hour and am watching Juve as they are the only show in town.

Ronaldo? Still a fuckhead. Less so as the Serie A does not affect me.

Speaking of fuckheads, the guy next to me on my flight is wearing moccasins and white socks. Even I’m fashion-aware enough to know that’s a no-no

It’s easy enough to slip the mocs off his feet. Make him walk wherever you’re going in just socks. That’ll learn him.

Are they like the moccasins Archer stole from the Russian guy?

The West By God Virginy episode was pretty good. So was Uruguay. Uruguay actually looks pretty damn swell. This Newfoundland one reminds me of the New Scandinavian Cooking show I used to watch on PBS. The one outlier is the guy with the Canadian/Newfie accent that is so pronounced it’s almost like someone making fun on Canadians.