Balls: Are you sure it’s a wise move to go back to the pub? What if Mary is there?

tWBS: Oh, there’s no chance of that. There was… an accident.

tWBS: It wasn’t my fault!

Balls: It never is. What happened this time? I would imagine there was no space for a Fuck Pyramid.

tWBS: No, there wasn’t. However, since the walls were so close and Mary was so limber, we were…. trying something out.

Balls: Is that why Mary was limping as she stepped over me this morning?

tWBS: That carpet must have been laid on top of concrete. I was worried for a bit.

Hippo: You’re welcome, by the way! I can’t believe I had to reach into my private stash of pills for you!

tWBS: You did a good thing.

Hippo (grumbling): Yeah, well, I’m down on my supply. We will need to stock up somewhere. I just don’t know where we can get quality pills.

tWBS and Balls: We know where!

tWBS: First a drink, then we head to the train station!

Hippo: I did NOT know that Newcastle was the pill-popping capital of Britain!

tWBS: It’s actually not, but it’s the cheapest and easiest way to go to where we’re going.

Hippo: And that is?

Balls: A surprise, but it’s on our way towards the girls, so it works out well.

tWBS: Plus, you’ll have all the pills and drugs you can possibly want.

tWBS: Our boat doesn’t leave until 5, so we’ve got some time to kill.

tWBS and Hippo look at each other.

Balls: Sure it is! It says it right on the bottle!

Hippo: Actually, Heineken bought out the company that made the beer and moved production to Holland.

Hippo: Yup, but on the bright side, we can go see visit the barcodes’ stadium! Maybe pick up a scarf for Litre?

Hippo: Dudes, this boat is great! It has a casino and everything!

tWBS: Not bad, eh? I think there’s even a nightclub too! At least a couple of bars.

Balls: Our cabin is… a bit cramped.

Hippo: Who cares?!? Me and GAMBLOR got a date tonight!

tWBS: And you can see me at the bars and lounges.

Balls: So when does this turn into a club?

Balls: All I see is a bunch of old dudes playing bingo.

tWBS: Relax, they’ll finish in a bit. Why don’t you go take a walk and get some fresh ocean air? Might do you a bit of good, Mr. Pissy Pants.

Balls: Yeah, you’re right. We’re on a European adventure, right? Might as well start having fun!

The dealer watches the ball clink around the wheel until it eventually comes to a stop in a number.

Hippo: Elway, you did it again you magical horse!! WOOOOO!!!

Balls heads out to the deck and realizes it’s gotten cold outside. As he heads back towards the room to get a jacket, he thinks to himself that this is actually a pretty cool boat. And, there are lots of beautiful ladies out and they look to be wanting to party. Maybe tonight is his night?

He manages to get into the room and finds the jacket. For some reason, probably the lack of sleep the last two days, he’s a bit tired.

Balls (to himself): Ok, one little nap. I’ll set the alarm on the clock for one hour and then I’ll be fresh and ready to party!

Balls looks at the clock and realizes he slept through the night. He looks around and also realizes that he is alone in the room.

Balls: Where did those two go?!?

The door clicks open and Hippo steps into the room.

Balls: Dude, where were you?

Hippo: Man, what a night!! I was up, I was down, then up again! And that was just the gambling! Oh that girl! Those shoulders!!

Hippo: Um, Hildy? Mandy? Something dy. I dunno. Anyway, what a night!

Balls: You’re just now getting in?

Hippo: Yah. Man, they got some NICE first class cabins on this boat!

Balls: How do you know that?

Hippo: Hildy or Hippy. Whatever her name is. I slept in her room. Well, the little that we slept…

The door clicks open again and tWBS steps into the room.

tWBS: What up, slapdicks? Who has two thumbs and had himself a foursome last night?!?

Hippo: They have golf on this boat?

tWBS: No, dude. Me and three lovely lasses from Newcastle on their way to a hen’s party weekend. Talk about starting the weekend off right!

tWBS: Damn right I did!

Balls: Did anyone get hurt?

tWBS: Not that I know of. I left their first class cabin before they woke up. Dude, they have some really NICE cabins on this boat!

tWBS: I should make a t-shirt for that. Dude, what happened to you? I kept telling the girls I had a friend and I talked you up, but you never showed. One in particular wanted you all to herself!

tWBS: Yeah! But then she got tired of waiting and decided to join in the fun.

tWBS: Yeah, she was the hottest one.

Balls: Of course she was.

Everyone’s gettin laid in this series! Congrats to Hippo!

Balls, I don’t know if the ladies would have gone for this. Falling asleep may have saved you some embarrassment. 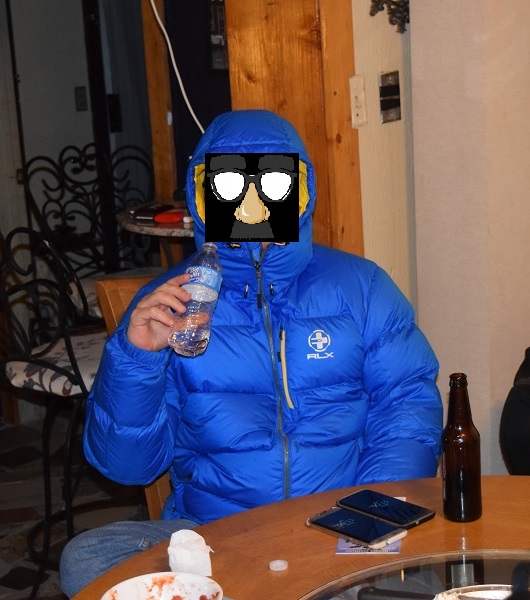 If I ever meet you and you don’t have a Groucho mustache I will be very disappointed.