Yeah, up here in The Canada Don Cherry was fired because his last windy rant included the phrase ‘you people’. He was talking about poppies. Parse that out, Einstein. He’s been a divisive TV shouty person for 39 years and was once voted as the seventh greatest Canadian in a CBC poll/doc series. He was essentially your blowhard drunk uncle that barked louder and louder as the night wore on and he realized he was losing the argument that he brought up in the first place. Let’s head over to our usual thingy.

-The NFL delivered some highly entertaining games yesterday on the heels of some fantastic tilts the day previous. LSU and Minnesota delivered the W and were rewarded with the #1 and #7 spots in the AP poll. Fucking well done.

-Not well? That’d be David Johnson and Saquon Barkley. Both seem to be putting their team over their health and that never turns out fine.

-Charles Rogers was an extremely gifted wr at Michigan State that flamed out in the pros due to injuries, substance abuse and bump-ins with the law. He passed at the age of 38.

-Injuries? Too numerous to mention. Lots of guys in concussion protocol including at least 4 (!) Giants I’m aware of. Lots of MRI’s happening today as well.

-Pat Shurmur’s seat is getting hotter. Check this out-the backup left tackle that got torched by the Jets D after starter Nate Solder went down had no idea he was going to play that position because he’d always practiced as a ‘jumbo’ tight end on the right side. These little tidbits about players not being ‘coached up’ properly are leaking out which suggests to me that Shumur is about to lose the room.

Jimmy G went off last week but San Franny still averages a mere 28.75 pass attempts per game. Good luck to those of you that have either Coleman or Breida or both. Me? I’ve got Chris Carson and I hope he pulls a Kenyan Drake. The latter went for 110 and a TD vs. this vauntful D. Btw, that D has not yet faced a top 15 qb yet. I mean, yes, they’ve crushed the throats of teams they should have crushed but Russell Wilson is in another (in the convo of league MVP) category altogether.

Hey, let’s do some typing!

I saw Dr Sleep today and was entertained. There was an amusing bit of dick stepping because they used pseudo footage of the original Shining where Halloran died but he lived in the book and this was based off the King sequel so confusion ensued. Good movie. Worth the effort.

Once my sphincter unclenches, I think I’ll be able t I appreciate this game

And thus the conclusion of the fantasy gods series?

That was a pretty good game, huh? 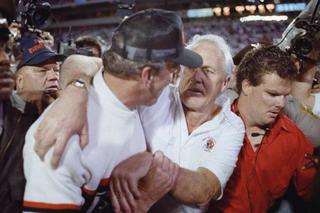 I believe (like 99% sure) that Russell Wilson would be the first NC State graduate to win NFL MVP. Unless an asteroid destroys the earth within the next few months…he is gonna be MVP.

Lamar still in the conversation.

you forgot the exclamation point

Can also throw the javelin.

He’s gonna get caught, just you wait and see.

“Why is Jason Myers winnin’ kickin’ over me?”

“Someone paged me?”- Najeh Davenport

THAT, I enjoyed. Beer has nothing to do with it. Or maybe something. Whatever.

Speaking as a veteran and American hero I would have won this game long ago. God bless us all, but especially me because of my service. Fuck you.

Jesus put you in the White House, Mr Trump Sir.

Fuck the bone spur Cheeto. Fuck you for associating him with me. NEXT!

NO PUPPET YOU’RE THE PUPPET

I salute you for your service, in that your grades were not good.

Also, thank you for taking my place in Iraq, playing touch football.

Now that I read this back, it sounds disrespectful.

But I do appreciate your shootin some browns.

Fuck you for making me type “fuck you” twice on an iPhone. Fuck you. Dang that’s three times.

As a submarine engineer I shot no one. But if given a preference I would have shot Japs. Fuck you.

Fair. And fuck you for your service.

I fought, and defeated, the Soviet Union. If you get asked back to Jeopardy! perhaps you can answer that question right this time. God bless and fuck you.

I appreciate your ending Communism. Mr Gorbachev, tear the fuck down this wall.

I will also never get asked back to Jeopardy, which is for the best.

I think everyone in the service should thank me for NOT serving. I would have been awful.

Addition by Subtraction: Gratliff’s Role In The War

Big fucking deal. You don’t see me bragging about my time in the Luftwaffe do you?

Because you lost. NEXT!

So did the South. Doesn’t keep them from running their fucking mouths about their great-great-great-great grandaddy who fought for the CSA but only because of states rights issues cause he wasn’t racist at all and was actually really nice to the slaves he owned.

Thank you for for your comment which had nothing to do with anything. Fuck you for making me fight with valor for your right to say stupid shit. Fuck you again and fuck SonOfSpam for the fifth time. God bless you both in all your future endeavors.

I like that those old guys celebrate other teams failing to go undefeated. They don’t owe these guys shit and we don’t have enough spiteful celebrations. Win em all and they’ll stop.

Of course he would. They just look slow on celluloid.

WHAT ABOUT A COCAINE SNORTING PRACTICE SQUAD???

It was much, MUCH easier to go undefeated in the 70s. Or any point in time before the salary cap era.

That explains all the teams that did it.

as the Brits would say, she had a ‘mare

And somewhere the ’72 Dolphins can go fuck themselves.

This is the solidarity I come here for

Mercury Morris is gonna fuck everyone’s mom, do some coke, and still be the greatest.

I don’t know exactly how I feel about that.