Titans fever is raging. Kicker Stephen Gostkowski recovered from crippling yips after missing four kicks and an XP in Week One, and has kicked deciders in all games so far. Of greater concern to opponents: ruthless DL Jeffery Simmons, QB Tannehill spraying passes all over, and a virulent home atmosphere. If HIPPA weren’t so toothless, Tits would go 16-0 easily.

This morning, my patience and huge spite towards Sunday Ticket [lowers mask, spits on floor] was rewarded: the local CBS affiliate is scheduled to show PIT @ TEN this Sunday. It brings me joy that TEN would monopolize the eyeballs of casual NFL fans, not just the “Tolja!” wags focused on Cassandra-ing the shut down of the 2020 NFL season.

The 3-0 Titans have barely beat two NFL teams with key players injured, plus the regular Jags. This Sunday is the start of a three-game homestand against the most hated rivals—Steelers, Bills, and discipline. OC Arthur Smith is getting buzz for being an inventive playcaller, suffocating opponents in the last quarter (TEN leads the NFL in 4th quarter points since Week 10, 2019). RB Henry can punish given the slightest breathing room, and bombs to speedy WRs Kalif Raymond and Cam Batson kill you through the air.

On defense, outside linebackers coach Shane Bowen tested positive for Covid-19 last Saturday. He did not make the trip to Minnesota for the Week 3 game, but today both MIN and TEN have cancelled all in-person operations for the time being. This came with the announcement that three TEN players, and five coaches, also tested positive. The 12:00 M Central Sunday game vs. the Steelers remains as scheduled, but could be moved to Monday. As it would feature an AFC South team, only worldwide Yinzer clamoUr could make it a MNF doubleheader.

In the meantime, the Titans announced that they are prepared to play, even if they could only get a Saturday walk through before coughing all over the Steelers on Sunday—especially Mike Munchak, Hall of Fame catfighter.

It is now up to the Tennessee Titans to look inward for fortitude, and outward for a tun of Lysol. I’m confident in my favorite team’s ability to overcome adversity, achieving victory on the field, and never been named in the same sentence with the Tampa Bay MRSAs and Cleveland Stephs.

All kidding aside, it’s a tragedy. I’m afraid The Product On The Field will suffer. If quarantine has taught the world anything, is that remaining indoors is a Petri dish for binging on stupid series, Cheetos, and one’s genitals. Coaches’ routines will suffer too, as they can only cajole and sermonize so much through Zoom. And all those inspirational slogans inside the team facility will go on unappreciated. Luckily, as far as I now, ‘Rona’s illiterate. May a huge Fathead of Eddie George shine over sanitation personnel.

I’d be curious to watch how/when the lines on the game moved as this news was released [publicly].

The important thing is that according to Herman Cain’s Twitter feed, which is still going after Herman Cain died of COVID, this is all bullshit and masks are the real problem.

And FYI – I just spent two fucking hours unclogging a toilet. My 6 year old dropped a family sized deuce, followed by a roll of TP.

Being a parent is rewarding.

Moose -The End Is Well Nigh
Reply to  jjfozz

Sharkbait
Reply to  Moose -The End Is Well Nigh

Looks like Red got a foot in his ass

What are you feeding that kid?

Who cares? fuck football for breaking my heart once again.

Cut to this Sunday: “Let’s fucking gooooo! I love this game!”

Call it a tie and then you avoid defeat!

As a survivor of three ties: Hell, no! You have to earn the tie and drag your fans kicking and screaming with you!

“This Sunday is the start of a three-game homestand against the most hated rivals—Steelers, Bills, and discipline. “

I don’t think this game is played. 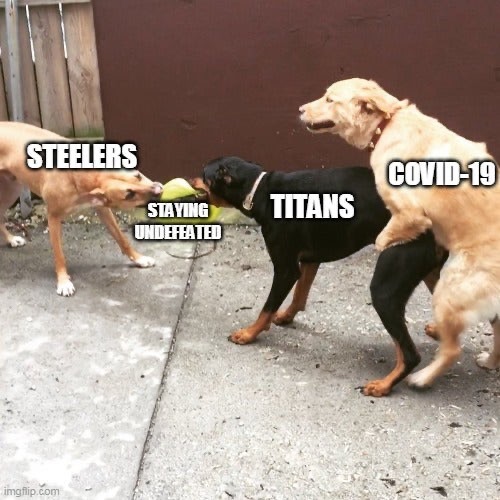 -Keep your eye on the prize!

Binging on Cheetos and my genitals is a year round obsession.

Meanwhile everyone in October wants to play the Twins. Same old Twinkies, and it looked like they might actually win one today.

I didn’t know COVID-19 was part of the Olympic pantheon, but there is goes, devastating the Titans.

It seems like the Titans are as determined to end the season undefeated as the Raiders are to preserve their first winning season since 2016: