Welcome back! What a weekend of football, huh? (Note: this is being written prior to the weekend’s games. Insert picture of dog in science with the caption I have no idea what I’m doing.)

As a reminder, this post will cover comments made up to and through the Saturday Night Open Thread. Sunday comments stand alone and Monday comments will go on the next week’s post.

So, unfortunately, this was another one of those weeks where politics dominated. You know what I think about that.

Therefore, I want to touch on a few subjects that need to be discussed.

In case you missed it, NATO Pats Fan won the DFO Eliminator Pool! Not only did he win the pool, but he went undefeated the entire season! That’s mighty impressive!

I was in a big money pool once and managed to last until the end. I got a nice chunk of change from that so I not only know what a great feeling that is, but how difficult of a feat it is.

Big time congratulations to NATO Pats Fan! I only wish we were able to offer you more than a gently-used Fleshlight.

Seriously, though, if you want we can ship you a bottle of liquor or make a donation to your favourite charity in your name. Let us know.

Another big wiener was Mr. Ayo, who won the DFO Pigskin Pickem contest via a tiebreaker with King Hippo! Congratulations on beating the Cousin Sal of DFO! Your gently-used Fleshlight can be coming (phrasing) your way if you give us your address.

Alternatively, you can choose a bottle of liquor or a donation to the charity of your choice. Unfortunately, strip clubs in LA are closed, so a donation to Charity is strictly out of the question. For now.

As soon as I saw the schedule, I knew that I could make the joke that at least the Steelers lasted longer in the playoffs than the other Wild Card Weekend losers. As soon as that first snap went over Ben’s head, I knew this was not going to be their day. Well, maybe after the second or third interception.

Seriously, he played as badly as he has ever played in that first half. The rest of the team didn’t do much to change the outcome either. The Steelers need to seriously consider trading for DeShaun Watson or moving up in the draft to get a QB. Maybe they can trade JuJu to Houston or Jacksonville to make that happen. Oh yeah, he’s a free agent!

And you wonder why I stopped caring…

Honestly, a few years ago, that loss would have gotten me pissed off. Instead, I was able to laugh and feel happy for Browns fans. I really do think they have been screwed for so long that they deserve something nice to happen. I’d love for them to keep going, but it will be tough going to KC.

New Orleans is not playing well but still handled the Bears, which tells you all you needed to know about the Bears. However, I do not think they get past Tampa Bay.

Interestingly, the #6 and #5 seeds won in both conferences setting up #1 vs #6 and #2 vs #5 matchups. I see the Chiefs rolling past the Browns and the Packers rolling past the Rams. With the #5 seeds, though, I see possible upsets.

As mentioned above, I think New Orleans is vulnerable. I also think the Ravens could take the Bills.

It’s gonna be Patrick Mahomes versus Aaron Rodgers for the Supe.

That’s all for now. Have a great week everyone!

My province ( Ontario) just went full lock down. No outdoor gathering of more than 5. Only grocery and pharmacies to be open before 7AM or after 8 PM. Everything else must be curbside pick up or delivery. Schools virtual until at least Jan 27th. And the big one, we have a “stay at home” order to stay in unless going to the grocery store, pharmacy, getting healthcare, going to essential work or excercising.

Stay safe out there campers. Don’t go clubbing in TJ

Speaking of, any good shows I should be watching? I started on Primeval, but it’s just terrible.

Hey, that’s a great segue to what I was going to suggest…

That reminds me, I need to seek out G4 and see when shows start dropping.

I enjoyed Queen’s Gambit on Netflix about as much as I do any new show. I also just found Detroiters which I have been laughing out loud with.

Queen’s Gambit was good, but then became too much story and not enough chess ass kicking.

Warrior Nun was pretty badass. Lots of ass kicking and a decent story line. Just waiting for the next season of that and the new episodes of Lucifer to come out.

I agree wholeheartedly on QG, it got a little too nice and got away from all the ass kicking. Did you ever watch Patriot on Amazon? That’s a good un.

I started the first few episodes, which were good. I forgot about that until you said something. I need to get back on on that one.

On Prime, it’s been Grand Tour. Those guys from Top Gear know how to put on a good show, and the repeats never get old. Plus, always good to see the appreciation for certain cars, like the Focus RS and the like, that other people really don’t understand the love for.

Balls, with all due respect, it’s bullshit to call /waves hand all this “politics” and dismiss it as if there’s room for debate and it’s rude to do anything but agree to disagree. An armed mob attacked the seat of democracy because of the lies and exhortations of Republican leadership, and after it was crystal clear that those lies lies to people erecting gallows on the west front of the Capitol chanting for the execution of two members of the line of succession, *more than 100* elected Republicans still decided to vote against certifying the election and continued to support overturning a free and fair election, almost certainly fomenting further violence against our country. We’re beyond immoral political activity and into traitor territory with blood on the hands of everyone who enabled this. Everyone SHOULD be talking about this, not shrugging off an armed insurrection against our government, and frankly, it’s time for everyone to pick a side. If anyone needs help doing so, here’s a helpful tip: 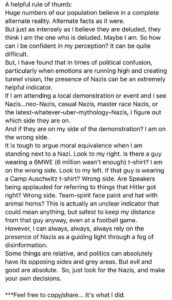 Last edited 7 days ago by BrettFavresColonoscopy
6

I didn’t say there was room for debate. I’m as against it as everyone.

And I’m saying this isn’t politics. There was an attack on our democracy last week and I don’t think we should move on. Not only because it looks like they’re going to try again next week but also because this was closer to the OKC bombing and 9/11 than it was a MAGA rally. We all SHOULD be talking about it. There should be massive outrage that accountability is seen as “Democrats being divisive”. There should be a collective call for a reckoning for all who did–and continue to–create the environment we’re in. Because frankly I don’t see how we succeed as a country when a solid chunk can call for civil war and too many Americans say “eh that’s just politics.”

I trust that the FBI, the army, and the incoming administration will take care of this.

I wish I shared your optimism. I don’t. I am scared to death that more people are going to die, and the Republicans who stoked this fire for years need to do a hell of a lot more than complain that Dems need to “lower the temperature.” Fuck a bunch of that! They made the mess, they need to fix it, or they need to go to prison.

is this where we chant “Lock them up”

This is where we lock them up.

I agree completely with BFC.

this Beavis and Butthead remake sucks 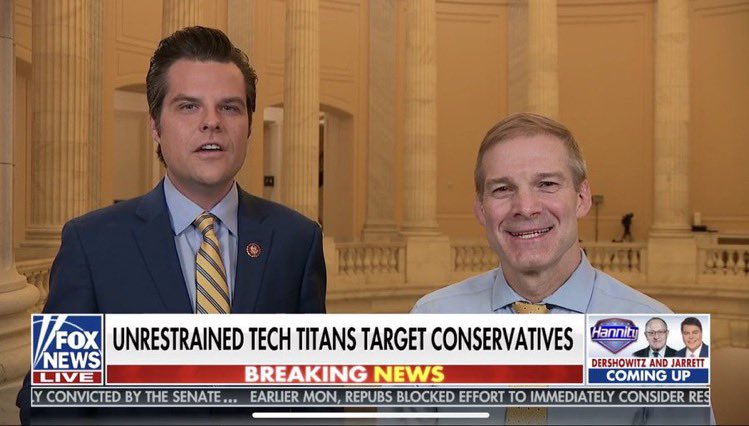 Last edited 7 days ago by rockingdog
8

You can almost hear the banjos in the background…

I’m getting dumbererer just looking at this image.

I was never a big fan of Sam Kinison’s stand-up comedy but I was always a huge Rodney Dangerfield fan from way way back.

That being said, I think this is a small gem of a movie scene here.

Top O’ the morning to ya!

I haven’t seen that movie since the 1980s, but I still remember that scene. Also, Oingo Boingo performing at the frat party..

Politics are over now right?

Until the weekend, unfortunately.