Happy Friday. This week I wanted to feature tequila, as I felt like it had been too long since I made a drink with tequila as the main ingredient. As luck would have it, my search for a not so run of the mill tequila cocktail brought me to the Berlin Wall. A cocktail that happened to include another oft forgotten ingredient: falernum. I immediately took advantage of this fortuitous turn of events and went to make one to give it a shot:

Shake it hard and double strain. Serve up in a coupe with an orange peel. 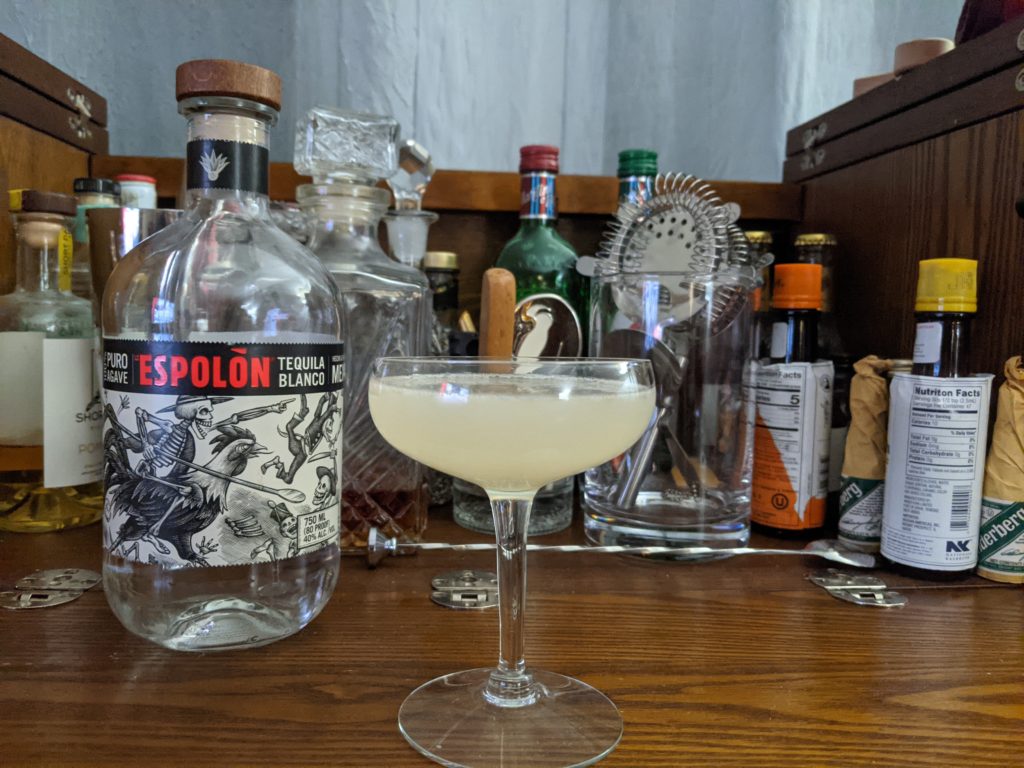 The first aroma I notice is a slight tequila smell. Upon a second nosing, I also get small hints of lime and falernum scents too. I think this is a rare drink where I can pick up all of the ingredients in the nose. The combination is pleasant, though I would characterize the smell as a touch medicinal.

The first sip is very light and refreshing. It is quite Lime forward, with some bitter notes along with it. I would assume the falernum is coming though and adding the slight bitterness in the first few moments. The tequila flavor comes in shortly thereafter, and while I can taste it, I don’t get the bite the tequila usually brings to a drink. Of which is a good thing here. The palate is crisp and smooth, so any strong alcohol flavor would ruin the Berlin Wall’s balance. The rest of the flavor doesn’t really change much after that as the sip finishes.

Another thing the Berlin Wall has going for it is it was a good chance to use of a more obscure ingredient in the falernum. I bought this bottle way back in October to use for the Zombie, but haven’t touched it since. I like the flavors and depth it brings to cocktails, and now I want to find more ways to feature it. Either from my library or trial and error. More than likely a combination of the two.

If you’ve got some falernum on hand. I suggest making (building?) a Berlin Wall this weekend.

Sharkbait
Sharkbait has not actually been bitten by a shark, but has told people in bars that he was for free drinks. Lives in Boston, married to a Giants fan, he enjoys whisk(e)y, cooking, the Rangers, and the Patriots.
Subscribe
Please login to comment
7 Comments
Inline Feedbacks
View all comments

One of the downside of the pandemic is that I haven’t gone to Total Wine or Bevmo in over a year.

One of the upsides of the pandemic is that I’ve saved a lot of money because I would be buying all kinds of stuff to try these drinks.

Or I’ve been getting deliveries from Fancy Free to support a local (ish, Burbank) liquor store.

I also used tequila this week, because we had tacos and they sent us extra lime wedges, enough to realize this:

have never heard of falernum before today

I bought a bottle last year sometime, for some cocktail I’ve forgotten. It’s also used in a Corn N’ Oil, and comes up a bit in tiki cocktails of one kind or another.

Hardly an essential item, but I’m learning some uses for it.

Same. Next time I hit the package store I’mma look for this.

Falernum is like chartreuse, where i know i want it for a handful of cocktails but never make the effort to stock it.